Maharashtra COVID-19 Crisis: While seven patients, including two women, died at the Vinayak Hospital, two patients died at another hospital.

New Delhi | Jagran News Desk: The death of nine COVID-19 patients at two different hospitals at Nallasopara in Palghar district of Maharashtra has sparked anger among their relatives as the rumour spread that the deaths were caused due to the shortage of medical oxygen and administrative failure.

While seven patients, including two women, died at the Vinayak Hospital, two patients died at another hospital.

All the deaths have been reported from the Intensive Case Unit (ICU) of the hospitals which sheds light on the crisis gripping the Vasai Virar Municipal Corporation (VVMC) under whose jurisdiction the hospitals of Nallasopara fall.

As a large number of people gathered at the hospitals, police personnel were deployed in large numbers to prevent any untoward incident. 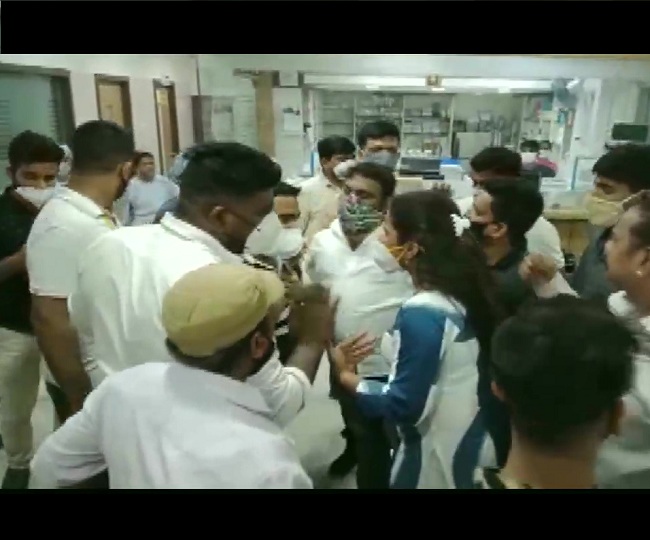 The situation was closely monitored by senior police inspectors of Tulinj and Nallasopara police stations and senior officers, a police official said.

Former BJP MP Kirit Somaiya tweeted that seven COVID-19 Patients died at a hospital in Nallasopara due to "defect in oxygen supply".

Doctors at Vinayaka Hospital, however, denied claim of oxygen shortage and said that the patients may have died due to age factor or co-morbid conditions. "It's only hospital accepting critical patients in the area. Those patients died either due to their age or co-morbidities," said one of the doctors.

Pinki Verma, daughter of one of the victims, said that her father was recovering well and was scheduled to get discharged on Monday.

"My father was corona-negative, but was put in the Covid ward. Today, they called to inform us that there was some emergency. When we arrived, there was some crisis happening over oxygen and a huge crowd had gathered. From 3 pm to 5 pm, they made us wait without giving us any information," she was quoted as saying.

The Vasai-Virar municipality has allegedly been facing a shortage of oxygen cylinders over the past may days. On Monday, local MLA Kshitij Thakur tweeted, tagging the Prime Minister's Office, highlighting the critical condition in Vasai taluk.

"Notably, the supply can run for only three hours. There are more than 7,000 active cases in the area and more than 3,000 people require oxygen supply daily," he wrote.