Cyclone Nisarga: 1 killed in Raigad after electric pole falls on him; Cyclonic storm set to weaken further in next 3 hrs | Highlights

Cyclone Nisarga: One person died in Raigad district after an electric pole falls on him.

New Delhi | Jagran News Desk: After storming the Maharashtra coast with wind speeds of up to 120 kmph on Wednesday afternoon, Cyclone Nisarga has started weakening and its intensity will reduce further by evening, the India Meteorological Department said.

The landfall of the cyclone began at 12.30 PM at Alibaug and the process was completed by 2.30 PM, IMD director general Mrutunjay Mohapatra said.

The National Disaster Response Force (NDRF) said that said a total of 43 teams are deployed in the two states of Gujarat and Maharashtra. Of these, 21 are in Maharashtra and 16 are in Gujarat. Nearly 1 lakh people have been evacuated from the cyclone spot, NDRF DG S N Pradhan said.

Here are the Highlights on Cyclone Nisarga:

7:20 pm: A 58-year-old man died after an electric pole fell on him in Alibag area of Raigad, Maharashtra today: District Collector Nidhi Choudhari

6:00 pm: THE SEVERE CYCLONIC STORM “NISARGA” OVER COASTAL MAHARASHTRA MOVED NORTH-NORTHEASTWARDS WITH A SPEED OF 24 KMPH DURING PAST 06 HOURS AND WEAKENED INTO A CYCLONIC STORM.

5:30 pm: Maharashtra: Many trees have been uprooted due to strong winds in Pune. 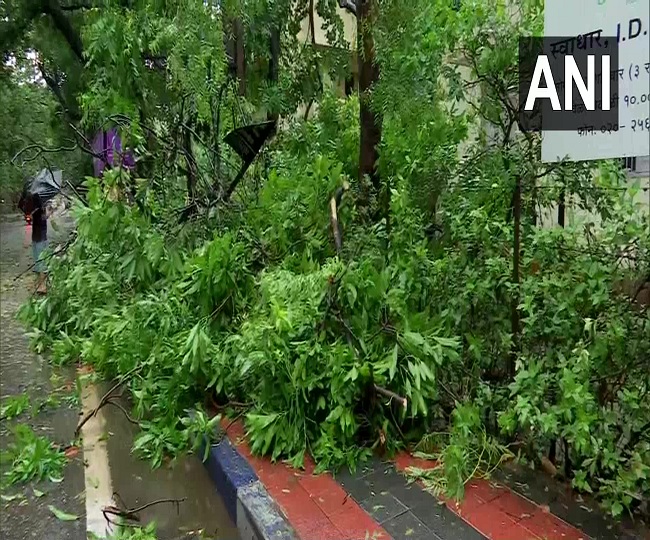 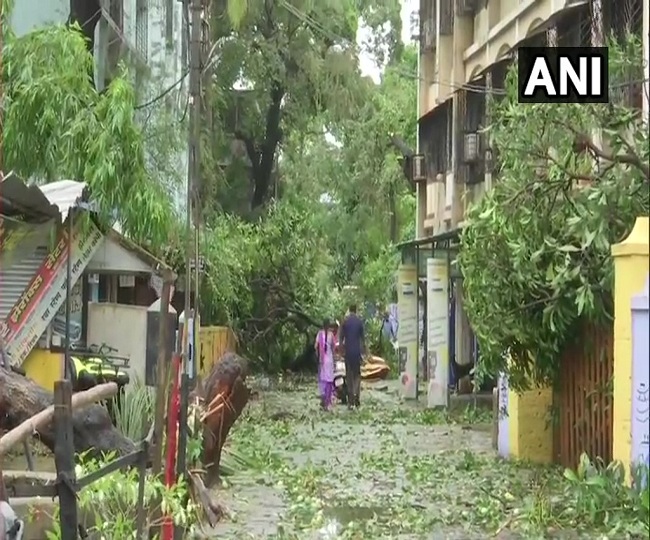 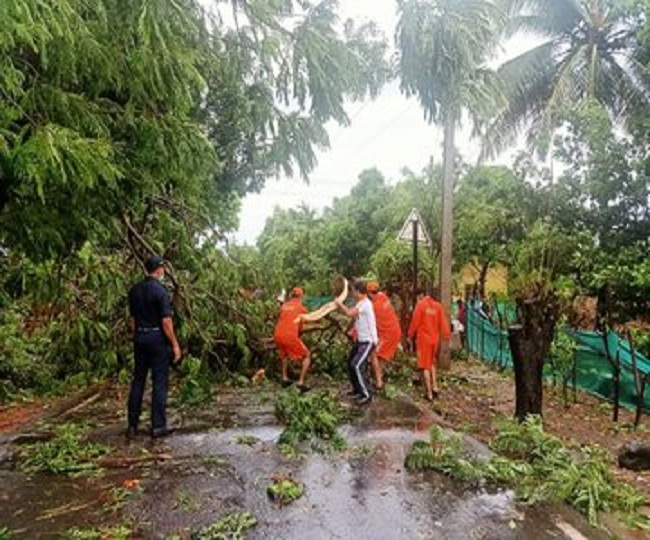 3:30 pm: #WATCH Tin roof atop a building in #Raigad blown away due to strong winds as #CycloneNisarga lands along #Maharashtra coast (Source: NDRF) pic.twitter.com/INlim5VG1c

3:15 pm: Maharashtra: Mayor of Mumbai Kishori Pednekar earlier today inspected the Girgaon beach, before heading for Versova. She says, "Our fire services, lifeguards&other disaster management teams are on standby. People living near the sea have been evacuated". 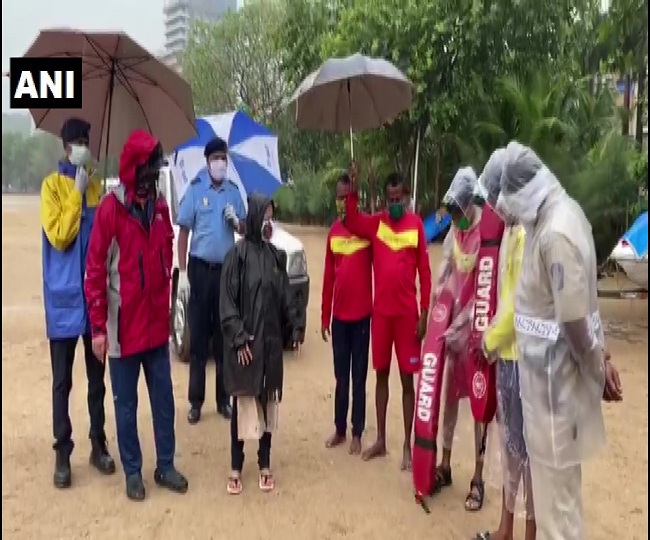 3:10 pm: Till 19:00 hrs, no take-off or landings would take place at the airport due to Cyclone Nisarga : Chhatrapati Shivaji Maharaj International Airport, Mumbai

2:50 pm: #WATCH Tin roof atop a building in Raigarh blown away due to strong winds as #CycloneNisarga lands along Maharashtra coast (Source: NDRF) pic.twitter.com/zTsQRNEAUH

2:40 pm: The rear part of the wall cloud region is still over the sea and the landfall process will be completed in one hour. Its current intensity near the centre is 90-100 kmph to 110kmph. It will move northeastwards and weaken into a cyclonic storm during next 6 hrs:IMD

2:25 pm: Around 37 tree falling incidents have been reported in different parts of the city in the last 24 hours.

2:15 pm: The next few hours are going to be critical. Please stay indoors and follow all the BMC guidelines. Don't spread rumours and help each other in getting through this, tweets actor Sanjay Dutt 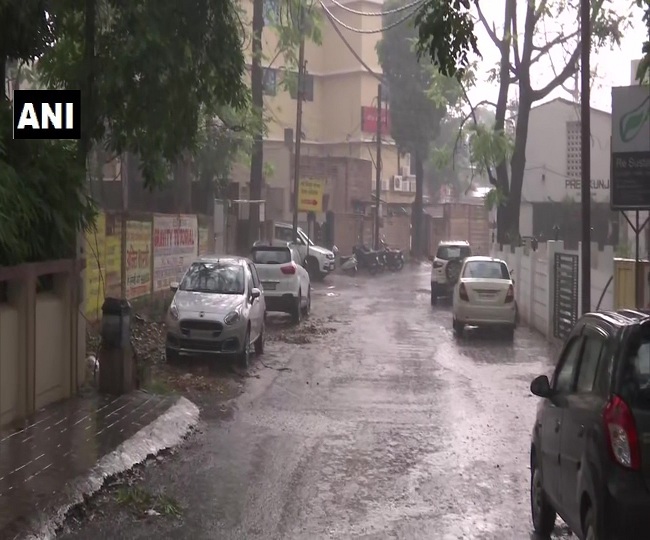 1:53 pm: About 43 National Disaster Response Force (NDRF) teams are deployed in the two states; of which 21 are in Maharashtra. Nearly 1 lakh people have been evacuated from the cyclone spot: SN Pradhan, NDRF Director General 1:35 pm: #WATCH: #CycloneNisarga makes landfall along the Maharashtra coast, process will be completed during next 3 hours. Visuals from Alibaug. pic.twitter.com/n5kpRtpBdS

01:23 pm: Been speaking to all our BMC assistant Commissioners all through, as we prepare for cyclone Nisarga. Each one of them is prepared to handle it and working on Covid response simultaneously, along with Mumbai Police. Requesting all to kindly cooperate with our teams: Aaditya Thackeray

#WATCH: #CycloneNisarga makes landfall along Maharashtra coast, process will be completed during next 3 hours. Visuals from Mumbai. pic.twitter.com/YKWizX82lC

01:03 pm: The center of the severe Cyclone Nisarga is very close to Maharashtra coast. Landfall process started & it will be completed during next 3 hours. The northeast sector of the eye of severe cyclonic storm is entering into land: IMD

12:59 pm: In view of Cyclone Nisarga, no vehicular movement is permitted on the Bandra-Worli Sea Link: Mumbai Police 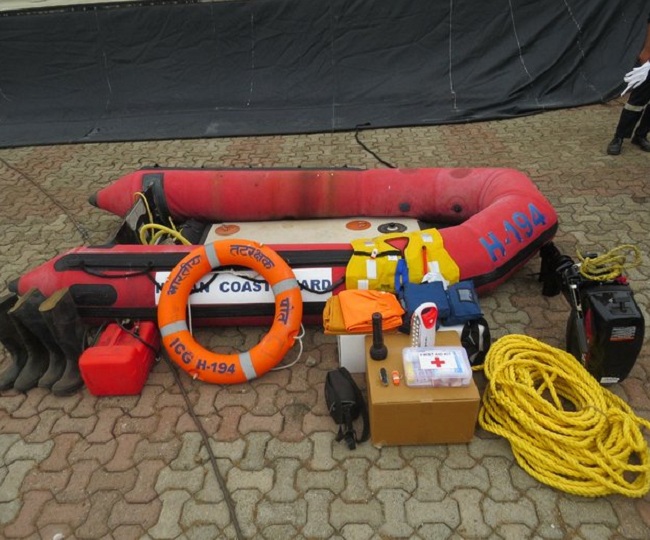 12:37 pm: The severe cyclonic storm is likely to cause severe damage, blowing off rooftops, smap power lines and damage roads and uproot trees, particularly in low-lying areas of Mumbai.

11:55 am: Around 40000 people have been evacuated to safer places till now from various locations (sea belt areas) of Maharashtra: Anup Shrivastava, Commandant NDRF 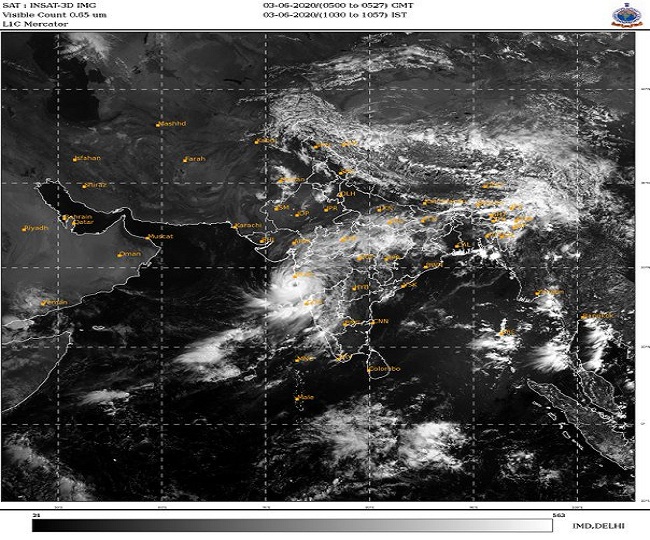 11:25 am: Cyclone Nisarga will cross Maharashtra coast between Harihareshwar & Daman, very close to Alibaug between 1 pm to 4 pm; visuals from Jetty area of Daman. 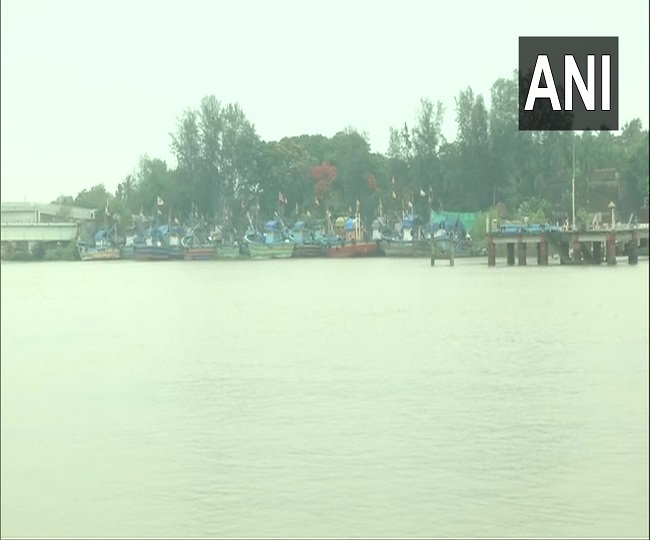 11:20 am: BMC has arranged about 35 schools as temporary shelters for citizens, who have been appealed to relocate there: Brihanmumbai Municipal Corporation

11:14 am: 8 units of National Disaster Response Force and 5 units of Navy have been deployed at various locations in the city. NDRF has 1 team each in Colaba (Ward A), Worli (G/South), Bandra (H/East), Malad (P/South) & Borivali (R/North) & 3 teams in Andheri (K/West): BMC

11:10 am: Mumbai Fire Brigade has been directed to stay alert to respond immediately in case of emergencies. 93 lifeguards have been deployed at 6 beaches: Brihanmumbai Municipal Corporation

11:05 am: Maharashtra: National Disaster Response Force team along with Brihanmumbai Municipal Corporation, evacuated local residents near the seashore in Versova today to safer places, in view of Cyclone Nisarga. 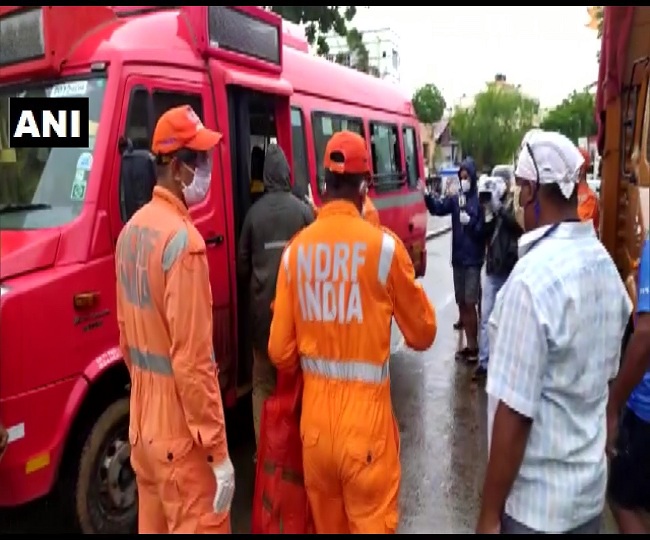 11:00 am: Wind speed of about 80 to 90 kmph expected over Maharashtra's Ratnagiri, Sindhudurg & Palghar. Over Gujarat's Navsari & Valsad wind speed of about 60-80 kmph is expected. By midnight it will weaken & by tomorrow morning it will become depression: Mrutyunjay Mohapatra, DGM, IMD

10:50 am: CycloneNisarga will cross Maharashtra coast between Harihareshwar & Daman,very close to Alibag between 1 pm to 4 pm. While crossing the coast it will have strong winds of 100-120 kmph over Mumbai,Thane & Raigad districts of Maharashtra: Mrutyunjay Mohapatra, DGM, IMD

10:38 am: Cyclone Nisarga has become a severe cyclonic storm, it's 200km away from Mumbai.

#WATCH Cyclone Nisarga has become a severe cyclonic storm, it's 200km away from Mumbai. The cyclone is moving northeasterly towards Alibag in Raigad. The severe cyclonic storm is likely to cross south of Alibag between 1 pm to 3pm:IMD Mumbai,Maharashtra; Visuals from Alibag Beach pic.twitter.com/P2GfsecdNr

09:18 am: Eye diameter is about 65 km as observed through Radar. thus the diameter has decrease during past 01 hour indicating intensification of system. hence wind speed has increased from 85-95 kmph to 90-100 kmph gusting to 110 kmph.

09:16 am: While it’s best that you stay at home during heavy rainfall; but if, for some unavoidable reason, you need to drive your car, please ensure that you carry hammer or objects that can help you break glass in case your car doors get jammed: Brihanmumbai Municipal Corporation

08:40 am: NDRF teams conducted evacuation of population at Valsad, Gujarat 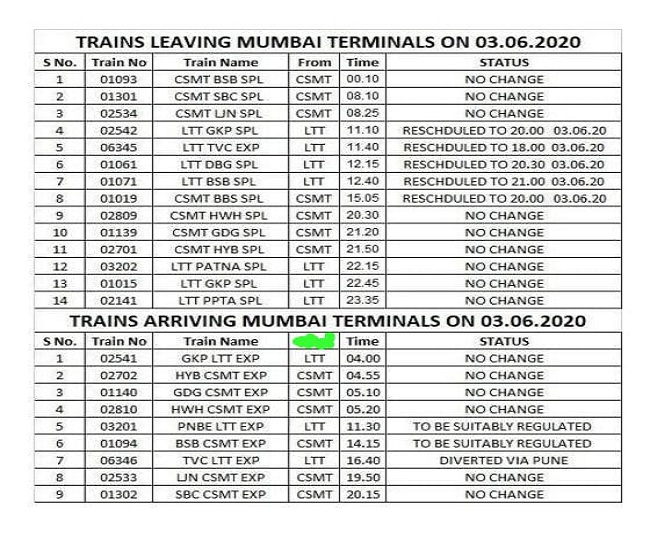 07:44 am: Cyclone Nisarga is expected to have wind speeds in excess of 100 km per hour, with gusts up to 120 km per hour. The Met department has also warned of one to two metre-high (three to 6.5 feet) storm surges inundating low-lying areas of Maharashtra.

10:02 pm: Maharashtra Chief Minister Uddhav Thackeray today urged people living in coastal areas to remain indoors for two days, starting tomorrow when cyclonic storm Nisarga is expected to make landfall near Alibaug. "Our entire coastal belt will be affected. The Army and the Navy has been kept on standby and the NDRF deployed. Home Minister Amit Shah held a review meeting with us and said that the Centre is with us," he said.

10:00 pm: Cyclone Nisarga is now moving NNE-wards and 270 km SSW of Alibag. Heavy Rainfall started over district of south coastal Maharashtra. It is likely to intensify further gradually during next 12 hrs: IMD

5:00 pm: Maharashtra: National Disaster Response Force team has been deployed in Palghar in view of Cyclone Nisarga.An NDRF official says,"We'll be evacuating people from coastal areas of about 13 villages&are prepared to carry out the operation while following social distancing norms". 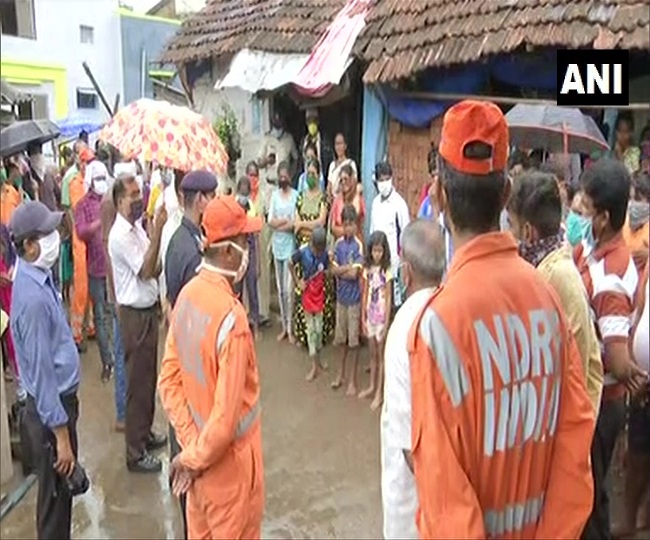 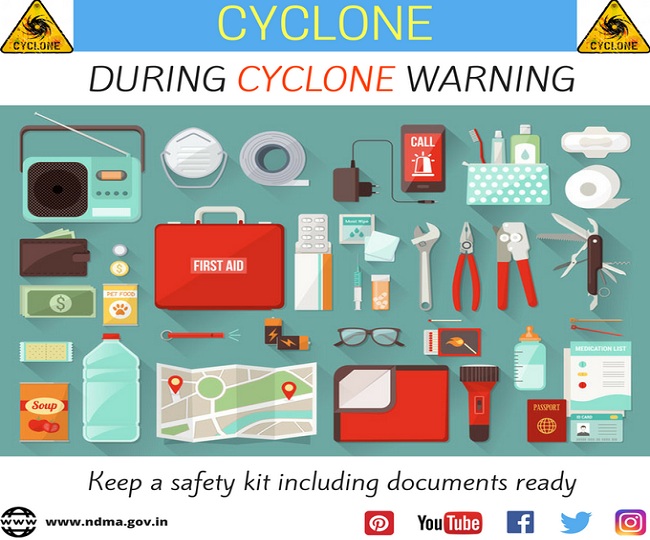 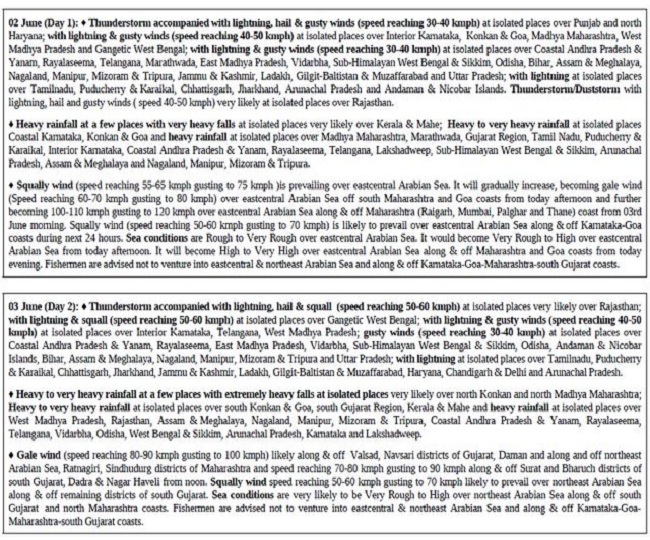 03:00 pm: According to IMD, a storm surge - as high as two metres above the astronomical tide - will inundate the low-lying coastal areas of Mumbai, Thane and Raigad districts during the landfall.