130 districts identified as Red Zones for 'no activity' after May 3; Delhi, Mumbai among them: Report

Uttar Pradesh, Maharashtra, Delhi and Tamil Nadu have 19, 14, 11 and 12 red zones respectively which have been marked as ‘no activity’ zones, the report claims.

New Delhi | Jagran News Desk: The Union Health Ministry has classified 733 districts across the country as red, orange and green zones while all metropolitan cities - Delhi, Mumbai, Chennai, Kolkata, Hyderabad, Bengaluru and Ahmedabad - have been kept in ‘no activity’ zone after the nationwide lockdown ends on May 3, according to a News18 report.

The report claims to have accessed the list of districts which has 130 districts identified as red zones, where strict restrictions will continue while curbs may be eased to some extent in green and orange zones.

Uttar Pradesh, Maharashtra, Delhi and Tamil Nadu have 19, 14, 11 and 12 red zones respectively which have been marked as ‘no activity’ zones, the report claims.

Here is the list of ‘no activity’ zones (red zones) identified in Maharashtra, Delhi and Uttar Pradesh according to the News18 report:

In the Delhi-NCR region, Ghaziabad and Gurugram have been marked in ‘orange zone’ categories.

Here is the complete list of Red, Orange and Green Zones: 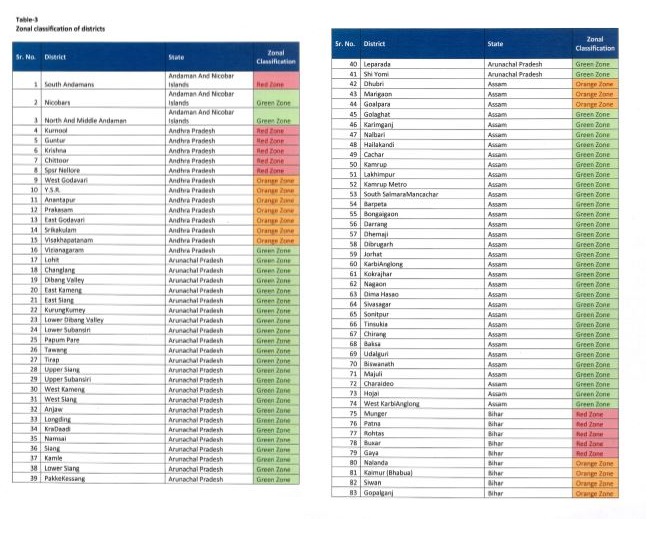 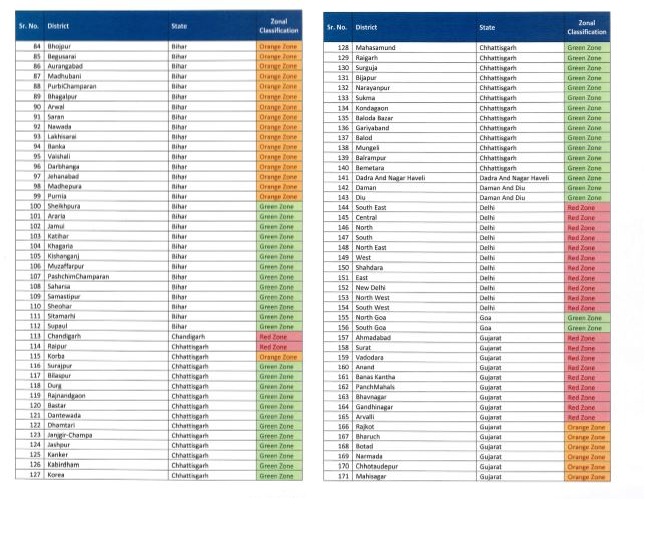 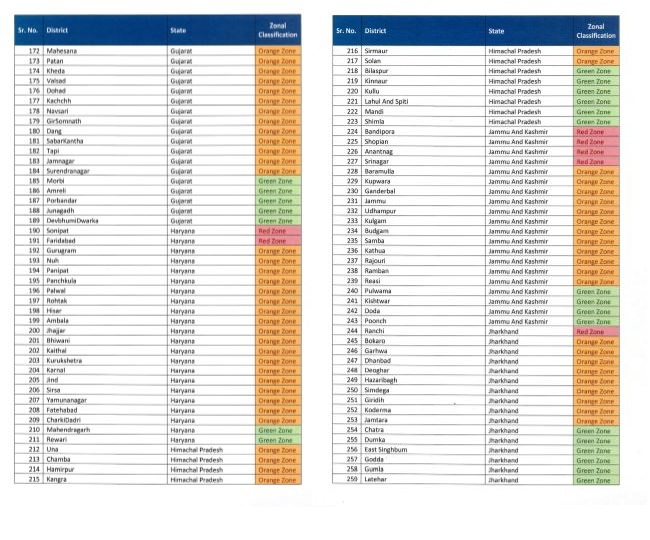 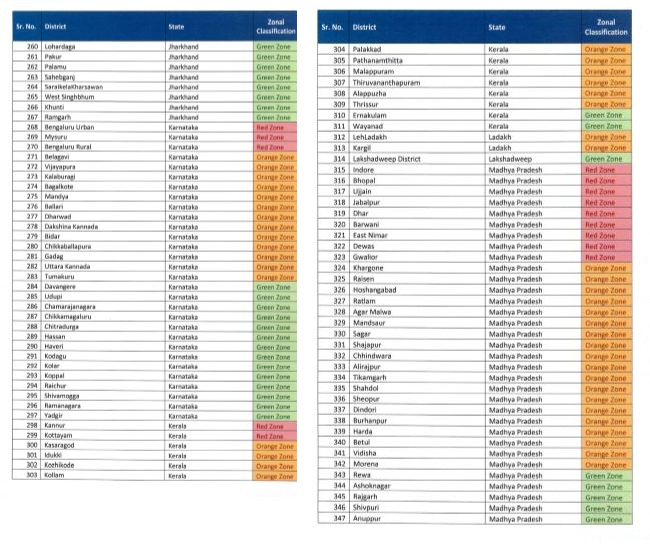 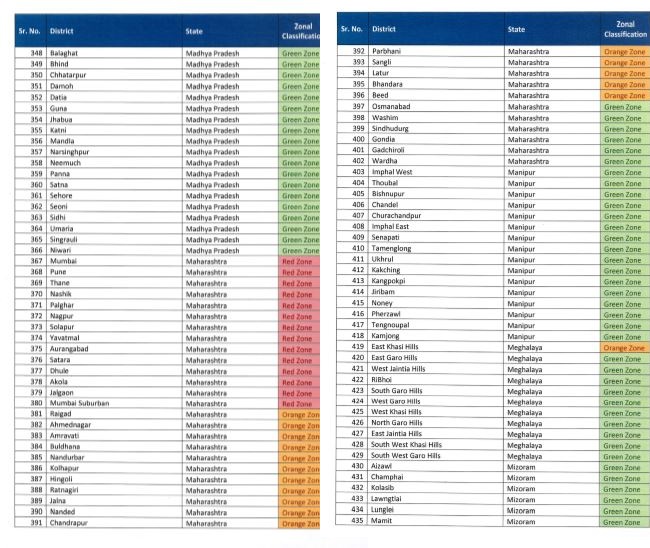 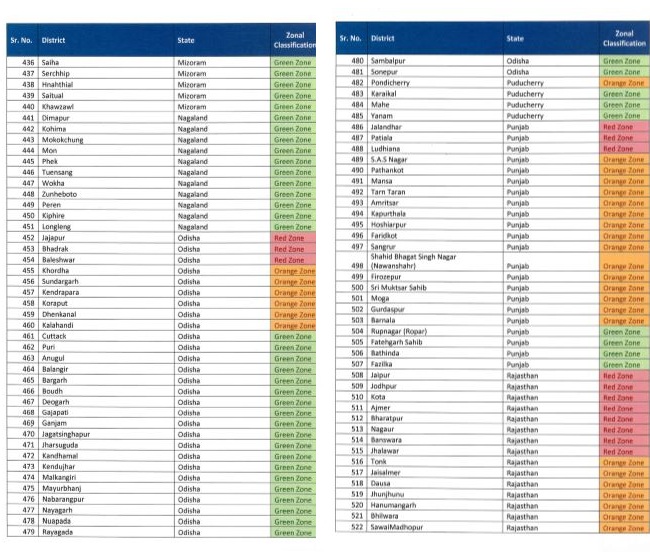 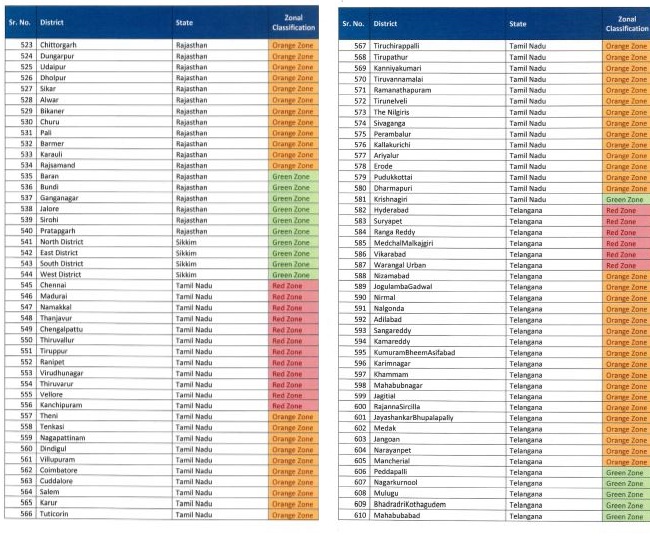 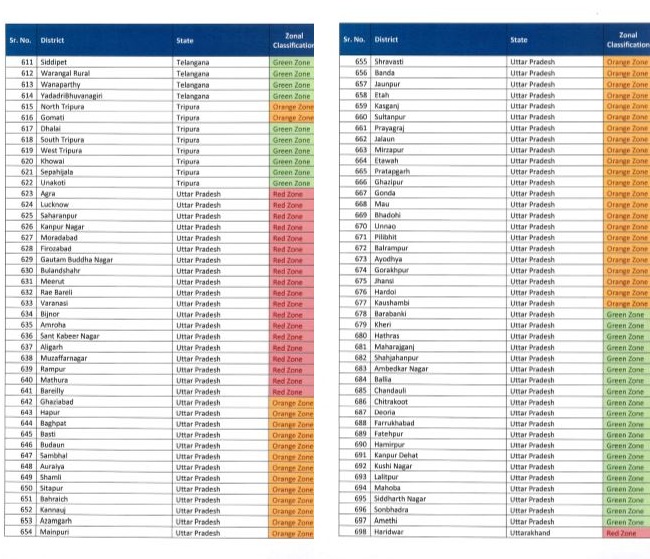 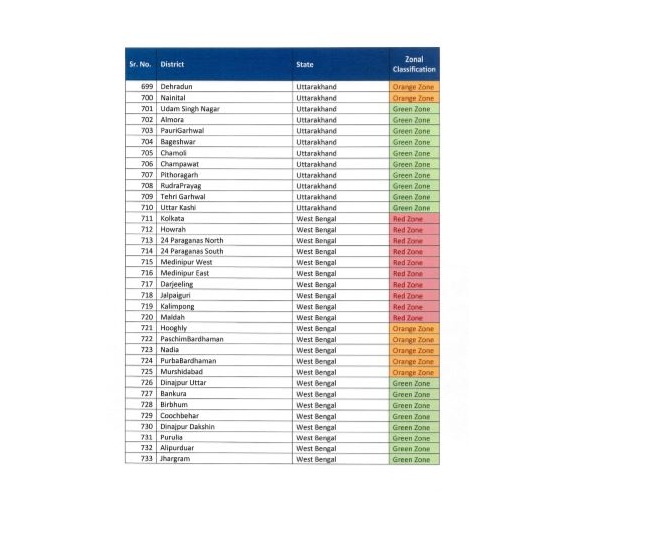 The Centre on Wednesday gave clear indications that the ongoing nationwide lockdown will be extended beyond May 3 but with "considerable relaxations" to people and services in "many districts".

The Union Home Ministry said it has held a comprehensive review meeting on the lockdown situation in the country and has found that there have been tremendous gains and improvement in the Covid-19 situation due to the lockdown till now.

"New guidelines to fight #COVID19 will come into effect from 4th May, which shall give considerable relaxations to many districts. Details regarding this shall be communicated in the days to come," the home ministry spokesperson tweeted.

The first guidelines were issued on March 24 immediately after the prime minister announced the lockdown for 21 days.

The guidelines, issued under the Disaster Management Act by the Union Home Secretary, specified the people and services exempted from the lockdown.

Also Read
Centre-Farmers Standoff LIVE | Tenth round of talks between govt and..

The number of COVID-19 hotspot districts in India on Wednesday has come down to 129 from 170 a fortnight ago, but in the same period the number of infection-free districts or green zones too decreased from 325 to 307.

During this time, the number of non-hotspot districts, also known as orange zones, increased from 207 to 297.

On April 15, the Centre had declared 170 districts across 25 states and Union Territories as coronavirus hotspots or red zones. Of these, 123 were hotspot districts with large outbreaks and 47 with clusters.

It had also said 325 districts had not reported any coronavirus case because of actions initiated at the field level.