According to the data given by the Government of Delhi, out of 823 containment zones, a total of 155 have been de-contained and as many as 688 remains to be the actual number of containment zones in the capital.

New Delhi | Jagran News Desk: After reporting 1,652 fresh cases of COVID-19 in the last 24 hours, the National capital has climbed up to the mark of 1,18,645 number of total cases of the infection since the outbreak of coronavirus on Friday. There are currently a total of 823 containment zones in Delhi, out of which 493 containment zones in the capital have been added after 21st June.

Check out the list of containment zones available by the Delhi government here: 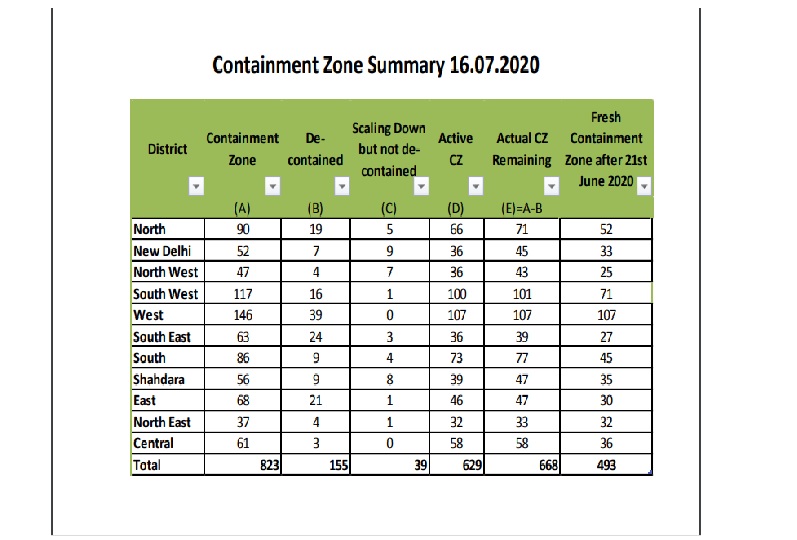 As per the data available by the Health Bulletin, There are presently 17,407 active coronavirus cases in the National capital and with 58 new deaths recorded in the last 24 hours, the death toll in Delhi has reached to 3,545.

It was on Monday, earlier this week that the capital recorded 1,246 cases and 40 deaths — the first time in weeks coronavirus cases have dipped below the 1,500-mark in Delhi. Although there is an increase in the number of containment zones in the national capital, active cases in Delhi continue to decline since the past week.

There has been a significant increase from the past few weeks in the recovery rate which stands at 82.34% of the national capital while the overall positivity rate for the city during the past month was 14.57%

Chief Minister Arvind Kejriwal on Thursday has lauded the Delhi model of COVID-19 to be made possible due to the collective efforts and support from all political parties, MPs and MLAs.

Delhi in the last month has witnessed a huge decline in the death rate and COVID-19 positivity ratio. Initiatives by the government such as increased testing, home isolation protocol, increasing medical infrastructure, increased number of beds, and teamwork on behalf of various stakeholders have reduced the impact of corona in Delhi, reports news agency ANI.

With the highest single-day spike of 32,695 cases and 606 deaths reported in the last 24 hours, India's COVID-19 tally on Thursday reached 9,68,876, informed the Union Ministry of Health and Family Welfare on Thursday.