Guwahati | Jagran News Desk: Amid protests in northeast over the passage of Citizenship (Amendment) Bill, 2019 in Rajya Sabha, mobile internet and SMS services were suspended in Meghalaya for two days and an indefinite curfew was imposed in parts of Shillong.

Meanwhile, indefinite curfew which was in force in Dibrugarh municipal area was relaxed for 5 hours on Friday even as large number of people gathered in Chandmari area of Guwahati to observe a fast called by the AASU to protest against the Citizenship Act.

This comes a day after the President Ram Nath Kovind gave his assent to the Citizenship (Amendment) Bill, 2019, turning it into an Act. According to the official notification, the Act comes into effect with its publication in the official gazette on Thursday.

Here are the LIVE updates on the protests in northeast over Citizenship Bill:

17:35 pm: Maharashtra Home Minister Eknath Shinde: There is no pressure on Shiv Sena on this matter, there will never be any pressure. Uddhav Thackeray is capable, he will take a decision in the interest of the state.

17:35 pm: Maharashtra HM Eknath Shinde: CM will take a decision on Citizenship Amendment Act. People of all caste, religion & language live in this state. All of them should feel that this govt is theirs. Our govt will continue to maintain a free atmosphere&see that law&order is maintained.

17:30 pm: The US is "closely following" the developments after India amended its citizenship law, a senior official has said as Washington urged New Delhi to protect the rights of its religious minorities in keeping with the country's Constitution and democratic values.

16:30 pm: DMK youth wing leader Udhayanidhi Stalin and scores of party workers were detained on Friday when they tried to stage a road blockade here while holding a protest against the Citizenship (Amendment) Bill, reports PTI.

15:33 pm: Issue of citizenship comes under the union list by 7th schedule of the Constitution. Such amendment is applicable to all states: ANI quoted government sources as saying.

15:19 pm: The influential All Assam Students' Union (AASU), which is spearheading the protests against the Citizenship (Amendment) Act, 2019, on Friday accused Chief Minister Sarbananda Sonowal of "surrendering before the Delhi leadership" and vowed to continue a "non-violent mass movement" against the contentious legislation.

14:28 pm: Chhattisgarh Chief Minister Bhupesh Baghel: Our stand won't be different from what is being taken by All India Congress Committee (AICC) on Citizenship (Amendment) Act. Our stand is same as them.

13:57 pm: Whatever stand the Congress party has taken on Citizenship Amendment Act, we will follow that, do we want to be a part of a process that sows seeds of divisiveness?: Madhya Pradesh Chief Minister Kamal Nath

13:51 pm: We will not tolerate any violence. Strong action will be taken against anyone who is involved in vandalism: Assam Chief Minister Sarbananda Sonowal to PTI

13:38 pm: We will follow the policy of our party's central leadership: Maharashtra Congress leader Balasahab Thorat on being asked if Maharashtra will implement Citizenship (Amendment) Act

13:19 pm: The curfew imposed in parts of Shillong following violent protests was relaxed on Friday for 12 hours, beginning 10 am, with no untoward incident being reported from the areas, officials said.

12:46 pm: Some elements may try to create violence but northeastern people are peace-loving, protests are also taking place but there are ways & means of protesting. Some have tried to take advantage of the situation: Kiren Rijiju

11:41 am: Kerala Opposition leader Ramesh Chennithala: I have decided to join the CAB case in Supreme Court because CAB is violation of the Constitution. People of Kerala are against Citizenship Amendment Act.

11:35 am: According to the legislation, the bill will not be applicable in tribal areas of Assam, Meghalaya, Mizoram and Tripura as included in the Sixth Schedule of the Consitution.

11:31 am: The Act says the refugees of the six communities will be given Indian citizenship after residing in India for five years, instead of earlier requirement of 11 years. It also proposes to give immunity to such refugees facing legal cases after being found as illegal migrants.

11:15 am: The Citizenship (Amendment) Bill, 2019 -- which has been given a nod by President Ram Nath Kovind -- seeks to grant Indian citizenship to people of Hindu, Sikh, Jain, Parsi, Christian and Bddhist communities who have come from Pakistan, Bangladesh and Afghanistan till December 31, 2014.

10:56 am: The Shiv Sena on Friday attacked the Centre, saying it brought the new citizenship law to show it is the sole saviour of Hindus and asked what kind of politics it is playing by inviting uncalled for pain after the move caused violence in the north-eastern states.

10:42 am: After Mamata Banerjee, Kerala and Punjab CMs declare not to allow Citizenship Act in their states

10:30 am: Two people were allegedly killed and several others were injured in protests during police firing in Assam on Thursday. According to news agency IANS, the two protestors with bullet wounds were taken to the Guwahati Medical College and Hospital, where one was declared dead before the other perished while being treated.

10:25 am: The curfew which was in force in Assam's Dibrugarh municipal area was relaxed for 5 hours on Friday even as large number of people gathered in Chandmari area of Guwahati to observe a fast called by the AASU to protest against the Citizenship Act.

10:15 am: Meanwhile, internet services -- which are suspended in the state -- were also extended for another 48 hours from 12 noon on Thursday and several flights and to and from Dibrugarh and Guwahati were halted. Several trains were also cancelled in the state. The Army also conducted a flag march in Guwahati and in three districts of Assam.

10:10 am: Assam Chief Minister Sarbananda Sonowal has appealed the people to maintain peace and calm in the state. “I assure the people of Assam full protection to ensure their identity as a whole. I hope the people will consider this appeal sensibly,” he said.

10:05 am: On Friday, internet and SMS services were suspended in Meghalaya for two days and an indefinite curfew was imposed in parts of Shillong. The state police, on its Twitter handle, have appealed the people not to spread false imformation and internet and mobile services have been suspended.

“Kindly refrain from sharing rumours. Any information which may impact the prevailing law and order situation should be verified first. Please share the information with us on our Facebook/Twitter or on contact us on the numbers given below,” it said. 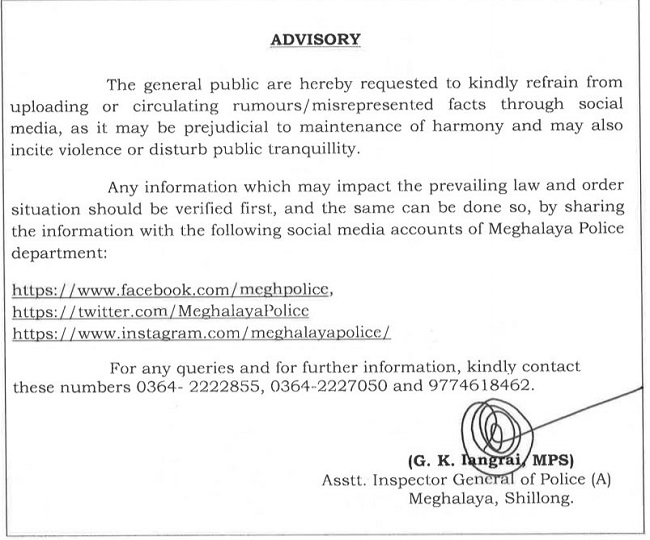 10:00 am: Suspension of mobile internet have also been extended for 24-hours in Tripura after a blockade of 48-hours. However, no fresh incidents in connection with opposition to the bill have not been witnessed. “Though the situation is normal in the state, rumour mongers are trying to spread fake news to create ethnic troubles and law and order disturbances. As precautionary measures, the suspension of mobile internet services were extended for another 24-hour in all eight Tripura districts,” IANS quoted a Home Ministry official as saying.

9:55 am: Meanwhile, Home Minister Amit Shah on Thursday assured a delegation of the Indigenous People's Front of Tripura (IPFT) that the Central Government will address their concerns over the Citizenship Bill.

“Met with delegations of IPFT and Joint Movement Against CAB from Tripura and discussed their concerns over CAB. Modi government will try to solve their issues in a positive way,” he said in a tweet.