Citizenship Act Protests: After US, Canada and Singapore warn its citizens against travelling Northeast India | Highlights

Meanwhile, the Indian Army has issued an advisory to the citizens to be cautious of false information being spread on social media about its activity in the northeast.

The northeast are witnessing violent protests against the Citizenship (Amendment) Act that seeks to grant Indian citizenship to people of Hindu, Sikh, Jain, Parsi, Christian and Buddhist communities who have come from Pakistan, Bangladesh and Afghanistan till December 31, 2014.

Meanwhile, the governments of four countries -- US, UK, France and Israel -- have issued advisory to their citizens asking them to ‘exercise caution’ while travelling to the region for any purpose.

Here are the LIVE updates on the protests over Citizenship (Amendment) Act:

17:21 pm: Rahul Sinha, BJP on protests against Citizenship (Amendment) Act in West Bengal: State is burning due to TMC, if it continues like this there will be no solution except President's rule. CM should give message to police that if protesters are seen doing violence, they should be shot

17:10 pm: The Act is completely unconstitutional and seeks to divide the country. Earlier, the Assam Accord of 1985, which stated that immigrants from 1971 would not be citizens of India, was not based on religions. Around 19 lakh people were identified, out of which 12 lakh were Hindus: Trinamool Congress (TMC) MP Mahua Moitra

17:01 pm: Home Minister Shah and PM Modi are trying to break the country. They are trying to create enmity in society. We will continue to fight against it under the leadership of Sonia Gandhi and Rahul Gandhi: Congress' Mallikarjun Kharge

17:00 pm: The Citizenship (Amendment) Act (CAA) is discriminatory and against the religion. The pain of the citizens are manifested through this rally. This is the first time that the Centre is making a law, which is divisive: Former Uttarakhand Chief Minister Harish Rawat

15:55 pm: After US and UK, Canada and Singapore have also issued an advisory asking citizens to exercise caution while travelling to the Northeast India which has witnessed violent protests against the amended citizenship act.

15:17 pm: I request everyone to not create any disturbance or involve in any kind of violence. Be sure that Citizenship (Amendment) Act and National Register of Citizens (NRC) will not be implemented in Bengal as we won't allow it. Please don't block roads and take law in hands: Mamata Banerjee

15:16 pm: West Bengal Chief Minister Mamata Banerjee has warned of strict action amid violent agitations and vandalism in several places across the state by people protesting against the amended Citizenship act and has appealed people to maintain calm and protest democratically.

15:07 pm: Jamia Millia Islamia: All exams have been postponed. New dates to be announced in due course of time. Winter vacation declared from 16th December 2019 to 5th January 2020. University to open on 6th January 2020.

Assam: Visuals from Guwahati railway station; curfew has been relaxed in the city from 9 am to 4 pm today. #CitizenshipAmendmentAct pic.twitter.com/7oE9hMEmiL

14:15 pm: I am deeply hurt that Prime Minister Narendra Modi and the central government did not even call the chief ministers for a talk on such an important issue before drafting the CAB: Kamal Nath

13:46 pm: "Modi-Shah are not bothered at all that Citizenship (Amendment) Act will shred the soul of India, just like it is happening in Assam and other states of the northeast," said Sonia Gandhi.

13:44 pm: Congress Interim President Sonia Gandhi -- while speaking at the Bharat Bacho rally -- also attacked the BJP over the Citizenship (Amendment) Bill and said that the bill shred the country apart.

13:29 pm: "The country knows the situation today. They work to create divides - between religions - in Jammu and Kashmir, in northeast. Go to Assam, Mizoram, Manipur, Nagaland, Arunachal Pradesh. Go and see what Narendra Modi did there, he has set ablaze those regions," said Rahul Gandhi.

13:27 pm: Meanwhile, Congress leader Rahul Gandhi -- at the Bharat Bachao rally -- attacked the government over the Citizenship (Amendment) Act and said they have set ablaze the northeast region.

13:06 pm:  People from Assam, living in Mumbai, gathered at the Azad Maidan here on Saturday to protest against the Citizenship (Amendment) Act (CAA).

12:29 pm: The Assamese 'gamosa' and the salutation 'Joi Aai Asom' along with the cry 'Ho!Ho!' has become the symbol of the protests raging the state against the amended Citizenship Act. The 'gamosa', a white and red patterned cotton handwoven fabric, is traditionally offered to elders and guests as mark of respect and honour by Assamese people.

11:53 am: The Jamia Millia Islamia has postponed all semester exams scheduled on Saturday in view of the tense situation in the varsity over the ongoing protests against the controversial Citizenship Amendment Bill (CAB), reports PTI.

11:37 am: Meanwhile, the West Bengal Police have said that in Howarh district's Domjur area, the NH-6 was blocked as protester set tyers ablazed and ransacked several vehicles.

11:30 am: Amid protests in West Bengal, the National Highway (NH) 34 has been blocked in Murshidabad, reports PTI.

11:10 am: People of Assam, living in Mumbai, protest against Citizenship Amendment Act, at the city's Azad Maidan. Actor Dipannita Sharma is also present at the protest. 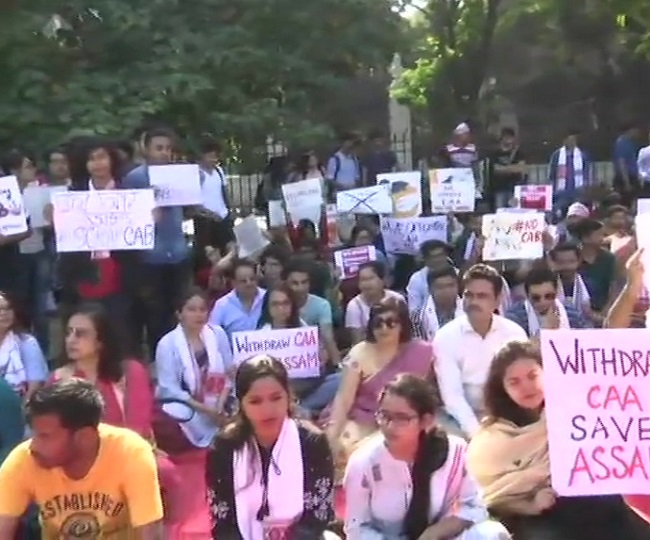 10:50 am: The bill was passed in Lok Sabha on Monday while in Rajya Sabha on Wednesday. According to the legislation, the bill will not be applicable in tribal areas of Assam, Meghalaya, Mizoram, and Tripura as included in the Sixth Schedule of the Constitution.

10:30 am: The Act says the refugees of the six communities will be given Indian citizenship after residing in India for five years, instead of earlier requirement of 11 years.

10:06 am: "Guard against FAKE NEWS and DISINFORMATION Please guard against vicious lies and disinformation being spread by some on social media," the ARMY said in a tweet.

10:05 am: The Indian Army has issued an advisory to the citizens to be cautious of false information being spread on social media about its activity in the northeast.

Please guard against vicious #lies & #disinformation being spread by some on social media. #IndianArmy #NationFirst pic.twitter.com/J0x012G9PK

9:44 am: The Citizenship (Amendment) Act seeks to grant Indian citizenship to people of Hindu, Sikh, Jain, Parsi, Christian and Buddhist communities who have come from Pakistan, Bangladesh and Afghanistan till December 31, 2014.

9:32 am: Meanwhile, 42 students were detained in Delhi's Jamia Millia Islamia University after a protests against the Citizenship (Amedment) Act turned violent. Police said they had to resort to use of tear gas as the protesters broke barricades and indulged in stonepelting.

9:23 am: "Curfew in Dibrugarh (Assam) has been relaxed from 8 am to 2 pm today," ANI quoted Dibrugarh Deputy Commissioner Pallav Gopal Jha as saying.

9:15 am: "Pursuant to the resolution adopted in the Emergency Executive Council Meeting of NSF, held on Friday at the Federation's Headquarter, it was unanimously decided to call for a six-hour total bandh in all the Naga inhibited areas, starting from 6am to 12 noon on December 14," said the NSF in a statement.

9:15 am: Meanwhile, the NSF directed all its federating units and subordinate bodies in Manipur, Assam and Nagaland to take up all necessary measures to ensure that the total bandh is carried out successfully in their respective jurisdictions.

9:10 am: ‘States have no powers’: Home Ministry official as five CMs refuse to implement Citizenship Act

9:05 am: ‘Curfews in place, exercise caution’: US, UK, Israel and France issue travel advisory amid protests over CAA in northeast

9:00 am: Curfew imposed in Assam’s Guwahati, amid protests against a controversial Citizenship Act has been relaxed from 9 am to 4 pm today.