Here are the LIVE Updates of April 30:

10:50 am: We should encourage local languages in courts. This will increase the confidence of the common citizens of the country in the justice system: PM Narendra Modi in Delhi

10:45 am: We must be mindful of 'Laxman Rekha', judiciary will never come in way of governance if it's as per law. If municipalities, gram panchayats perform duties, if police investigate properly &illegal custodial torture comes to end, people need not have to look to courts: CJI NV Ramana

10:42 am: The law should be made after thorough debates & discussions incorporating the needs & aspirations of concerned people. Often there's litigation because of the non-performance of Executives and inaction of Legislatures which are avoidable: CJI NV Ramana

10:37 am: Well-meaning intentions behind Public Interest Litigation (PIL) are misused as it's turned into 'Personal Interest Litigation' to stall projects & terrorise public authorities. It has become a tool to settle scores with political & corporate rivals: CJI NV Ramana

10:30 am: Government of India considers technology in the judicial system as an essential part of the Digital India mission. The e-courts project is being implemented today in mission mode: PM Narendra Modi

10:25 am: We are doing our best to improve the judicial system. We are also working to improve and upgrade the judicial infrastructures: PM Modi speaking at Joint Conference of CMs of States & Chief Justices of High Courts at Vigyan Bhawan in Delhi 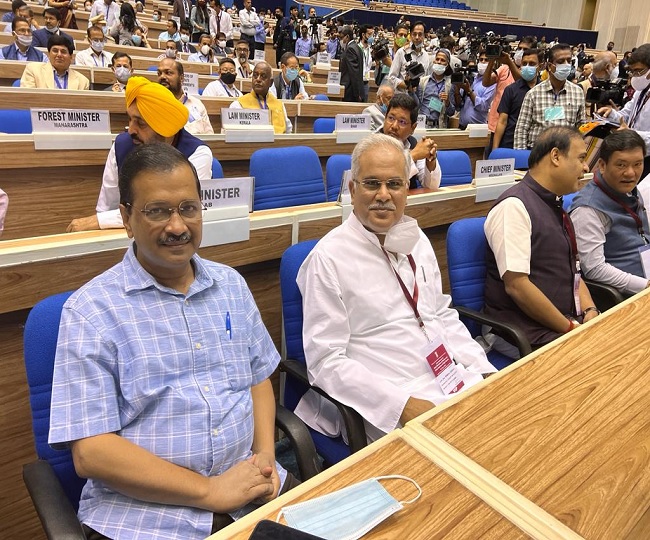 10:00 am: Punjab | The situation is peaceful & under control. We have appealed to the public to maintain peace. We are negotiating with them to control it (on a demonstration by a Hindu organisation). Cross FIRs filed, the law will take to task the accused: IG Patiala Rakesh Agarwal

9:45 am: Peace & calm should be maintained. The situation is under control. Mobile internet services are temporarily suspended today to stop rumour-mongering. FIRs were filed in three instances. On the basis of evidence gathered from video footage action will be taken: Patiala Deputy Commissioner

9:30 am: Punjab | FIRs have been lodged, raids are underway. We appeal to public to maintain peace. From 9.30am to 6pm today mobile internet services will remain temporarily suspended as a step of abundant caution by the govt. One person has been arrested: Patiala Deputy Commissioner

8:45 am: Mobile internet services temporarily suspended from 9:30 am to 6 pm in Patiala today: Dept of Home Affairs, Government of Punjab

8:30 am: Chhattisgarh | It's the responsibility of the Government of India that it should make sure a sufficient amount of coal must be supplied to the power plants across the country: CM Bhupesh Baghel in Raipur before leaving for Delhi yesterday

7:45 am: J&K: Pulwama district admin organised a mega Iftar party, including a competiton of Naat and Qira’at, in which prominent recitors participated. It was a first of its kind event here where such a huge gathering of youth participated, we thank the admin for this event: said a local

7:35 am: Ludhiana, Punjab | No shortage of coal. Demand for electricity increased by 30-40% due to extreme heat in summer. Power cuts were result of some technical issues in our 2 thermal plants, supply of 800MW was impacted: Deputy chief engineer Sanjeev Prabhakar on power cuts

7:27 am: Delhi | Fire at the Bhalswa landfill site in Delhi is still not under control. A massive fire broke out at the landfill site on April 26th evening

#WATCH | Fire at the Bhalswa landfill site in Delhi is still not under control. A massive fire broke out at the landfill site on April 26th evening. pic.twitter.com/H6UKfyVaTz

7:20 am: Haryana | Whatever coal crisis is there, as long as the coal supply is available we'll be able to move it fast & ensure that no power plant will be shut down without any problem: N Srinivas, Director (Op&BD), Dedicated Freight Corridor Corporation of India Limited.

PLT IN SECOND = 0.003250972
Jagran English brings you all the latest and breaking news from India and around the world. Get live English news from India, World, Politics, Entertainment, Lifestyle, Business, Education, Sports, Technology, and much more. Follow english.jagran.com to stay updated with the latest English news.
Copyright © 2022 Jagran Prakashan Limited.