Here are the Highlights of April 28:

1:03 pm: Non-Christian students not required to read Bible& no Bible instructions for them. Education Min said Bhagavad Gita will be introduced next year as its moral education text, while Bible & Quran are supposed to be religious texts so they will not be allowed: Archbishop P Machado

12:53 pm: Karnataka | Education Department has ordered an inquiry about whether the Bible is used or religion is taught in our (Christian) schools. I feel very hurt. We can bravely say that no student of other religion has become Christian in our school: Bengaluru Archbishop Peter Machado

12:47 pm: I can dream of becoming Uttar Pradesh CM again or the PM but not the President of the country. Samajwadi Party (SP) is responsible for BJP's win in UP. SP is dreaming of making me the country's president so that their path to the UP CM post is clear: BSP chief Mayawati

12:40 pm: Central govt has done drama to decrease fuel prices before Assembly election in 5 states election and increased the prices again after the results were announced. People of TN know well who reduces the price and who increases the price: Tamil Nadu CM MK Stalin in State Assembly

12:20 pm: It is requested that prior intimation of at least 10 days may be given to fix the date for encroachment removal drive in the area of Police Station Sarita Vihar so that sufficient staff may be given to assist the SDMC staff: Delhi Police to SDMC

12:10 pm: Due to pre-engagement/pre-occupation of Police Staff of PS Sarita Vihar in other law and order/investigation duties, it is not possible to provide sufficient staff to assist SDMC staff in carrying out encroachment removal drive in ward no. 101-S today: Delhi Police to SDMC

11:52 am: Assam | In the states where there is a double engine government, works are done with the spirit of 'Sabka Saath, Sabka Vikas, Sabka Vishwas and Sabka Prayas': PM Modi in Diphu, Karbi Along

11:45 am: Assam | PM Narendra Modi lays foundation stones for projects relating to healthcare and education including a Veterinary College in Diphu, Degree College in West Karbi Anglong and Agricultural College in Kolonga

11:30 am: Assam | In the states where there is a double engine government, works are done with the spirit of 'Sabka Saath, Sabka Vikas, Sabka Vishwas and Sabka Prayas': PM Modi in Diphu, Karbi Along 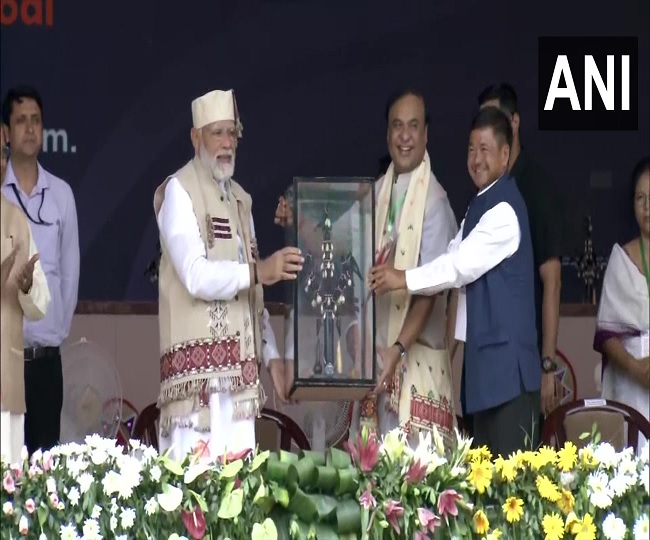 10:40 am: Mumbai | The CMs were told that PM Modi would hold a meeting on Covid. PM Modi taunted the CMs of non-BJP states regarding petrol & diesel, it's not right. PM Modi was not expected to do so but CM Uddhav Thackeray & Mamata Banerjee have given the answer: Shiv Sena's Sanjay Raut

10:20 am: Karnataka | An acid attack case has been reported in Kamakshipalya PS limits. The woman has been given primary health care and is out of danger. Teams have been formed to nab the accused: Dr Sanjeev M Patil, DCP West Bengaluru

10:00 am: Uttar Pradesh | CM Yogi Adityanath held a 'Janata Durbar' where he took cognizance of people's grievances in Lucknow

9:30 am: Maharashtra | Police seized a large cache of swords from a vehicle near Songir village of Dhule & arrested four people along with it. 89 swords and 1 dagger were recovered worth Rs 7,13,600 along with the vehicle. Further investigation underway: Pravinkumar Patil, SP Dhule

9:00 am: Mumbai Police Commissioner has written a letter to CISF DG to investigate what the security personnel assigned to BJP leader Kirit Somaiya were doing when Somaiya was allegedly attacked by Shiv Sena workers outside Khar police station on April 23: Mumbai Police

8:45 am: Mughal road, connecting Rajouri and Poonch districts of Jammu region with Shopian district of South Kashmir reopened for vehicular traffic yesterday, April 27 after remaining closed for over four months due to heavy snowfall.

#WATCH | Some areas of the Bhalswa landfill site in Delhi are still burning. A massive fire broke out at the landfill site on April 26 evening. pic.twitter.com/Ub39ej9ve4

7:36 am: Taking action on complaints of illegal constructions and felling of trees in the Corbett Tiger Reserve (CTR), the state government on Wednesday suspended two IFS officers and removed the director of the wildlife sanctuary from his post.

7:28 am: World Health Organization said on Wednesday that there have been more than 150 suspected cases of salmonellosis - from Belgium to the US - after United Kingdom regulators flagged a cluster of Salmonella (S.) Typhimurium cases a month ago, leading to a global recall. “At least 113 countries” across Europe and globally have received Kinder products during the period of risk, World Health Organization said. In a statement, WHO said that the outbreak strain of salmonella is resistant to six types of antibiotics.

7:20 am: We believe that no solution can be arrived at by shedding blood & at the cost of innocent lives. We've empassized right from the begining of the conflict the need to pursue the path of diplomacy & dialogue: Ambassador R Ravindra, Dy PR at UNSC Arria-formula meeting on Ukraine.

PLT IN SECOND = 0.00194615
Jagran English brings you all the latest and breaking news from India and around the world. Get live English news from India, World, Politics, Entertainment, Lifestyle, Business, Education, Sports, Technology, and much more. Follow english.jagran.com to stay updated with the latest English news.
Copyright © 2022 Jagran Prakashan Limited.