Today we will have a special focus on Chandrayaan-2 lander Vikram, INX Media Case and the case against Congress leader DK Shivakumar.

Here we provide 360-degree coverage on all genres including politics, business, India, world, sports and entertainment.

Here are the Latest Updates of September 11:

4:45 pm: J&K: All banks/ATMs are functional. 10 Internet kiosks have been created in all the district headquarters with minimum 5 terminals in each district for departmental purposes like e-tendering submission of scholar ship forms and job applications.

4:35 pm: Jammu & Kashmir: Schools started functioning, initially with primary schools then middle schools and followed by high schools. The attendance of teachers is around 75%. However, the attendance of students is still thin

4:32 pm: Jammu & Kashmir: All exchanges activated and all the landlines stand restored. Post paid mobiles have been restored in Kupwara district. Further, mobile numbers of officials belonging to essential services and other offices have also been restored.

4:30 pm: Srinagar District Administration: Arrangements made to facilitate registration of aspirants for the Graduate Aptitude Test in Engineering (GATE) 2020. 3 counters set up at Tourist Reception Centre (TRC) Srinagar as part of the arrangement to help aspirants register for the exam.

3:33 pm: Asaduddin Owaisi on PM Modi's remark "kuchh logo ke kaan par agar 'om' aur 'gaaye' shabd padhta hai to unke baal khade ho jate hain": Cow is a sacred animal for our Hindu brothers but in Constitution right to life&equality has been given to humans, I hope PM will keep it in mind

3:00 pm: Nitin Gadkari, Union Minister of Road Transport&Highways on revised traffic fines: This isn't a revenue income scheme, are you not worried about deaths of 1,50,000 people? If the state govts want to reduce this,is it not true that people neither recognise law nor have fear of it.

2:00 pm: Madhya Pradesh: Flood like situation in low-lying areas of Bhopal after water was released from Kaliasot Dam

1:45 pm: Bengaluru: Members of the Vokkaliga Sangha heading towards Raj Bhavan in protest against arrest of Congress leader DK Shivakumar by Enforcement Directorate (ED). Shivakumar belongs to the Vokkaliga community.

1:35 pm: PM Modi in Mathura: Yogi Adityanath fought all his life against Encephalitis & brought it to the attention of Parliament & country. However, few vested interest groups blamed his govt for deaths of children due to it but Yogi ji's spirit was not deterred & he continued his work

1:30 pm: PK Sinha appointed as the Principal Advisor to the Prime Minister.

1:15 pm: PM Modi in Mathura: Today terrorism has become an ideology, which is not bound by national boundaries. This is a global problem. This has become a global threat whose deep roots are flourishing in our neighbourhood.

1:05 pm: PM Modi in Mathura: A century ago, Swami Vivekananda gave his historic speech at Chicago about world peace on 11th September. Unfortunately, the same day also witnessed 9/11 terrorist attack in US that shook the world.

1:00 pm: Amaravati: Police has locked the main gate of TDP Chief and former Andhra Pradesh CM Chandrababu Naidu's residence. He was leaving for Atmakur for party's 'Çhalo Atmakur' rally despite being put under preventive custody by the police.

12:45 pm: Prime Minister Narendra Modi in Mathura: We need to make efforts to rid our homes, offices, and workplaces of single-use plastic by 2nd October, 2019. I appeal to self help groups, civil society, individuals and others to join this mission.

12:40 pm: INX media case: Senior Congress leader P Chidambaram has approached Delhi High Court and filed a regular bail application in the CBI case. He has also challenged the order on his judicial custody in the CBI case.

12:25 pm: MDMK Chief & Rajya Sabha MP, Vaiko, has filed a habeas corpus petition (requiring a person under arrest to be brought before a judge) in the Supreme Court for former J&K CM Farooq Abdullah. Vaiko says Abdullah was supposed to come for an event but couldn't be contacted.

12:15 pm: J&K DGP, Dilbag Singh: All 10 districts of Jammu have become entirely normal, all school, colleges, & offices are open. Leh & Kargil are also normal, there is no restriction of any kind there. More than 90% areas are free of restrictions, 100% telephone exchanges are working now.

12:00 pm: J&K DGP Dilbag Singh: LeT's Asif had created a lot of terror in Sopore. Over the last 1 month he was very active. He made use of Over Ground Workers to print posters threatening civilians not to open shops & not to go for their day-to-day activities. Today morning on specific information, nakas were laid. He (Asif) was challenged to stop but he didn't. He threw grenade at our parties in which 2 of our police personnel were injured; they are out of danger

11:45 am: TDP Chief N Chandrababu Naidu: This government is violating human rights & fundamental rights. I am warning the government. I am warning police also. You cannot play this type of politics. You cannot control us by arresting. Whenever they allow me, I'll continue 'Çhalo Atmakur'

11:38 am: Karnataka: Members of the Vokkaliga Sangha protest in Bengaluru against Congress leader DK Shivakumar's arrest by Enforcement Directorate (ED). Shivakumar belongs to the Vokkaliga community.

11:30 am: Mathura: Prime Minister Narendra Modi meets women who pick plastic from garbage and extends a helping hand to them. PM will launch a campaign against single-use plastic products, today.

11:30 am: CBI today approached the Supreme Court against the protection from arrest given to sacked Income-Tax officer, SK Srivastava, by the Odisha High Court. SC said it will consider the matter.

11:25 am: Amaravati: Police has locked the main gate of TDP Chief and former Andhra Pradesh CM Chandrababu Naidu's residence. He was leaving for Atmakur for party's 'Çhalo Atmakur' rally despite being put under preventive custody by the police.

11:20 am: Mathura: Prime Minister Narendra Modi to launch today National Animal Disease Control Programme (NADCP) that aims to eradicate the Foot and Mouth Disease (FMD) and Brucellosis in the livestock

11:15 am: Andhra Pradesh: TDP Chief N Chandrababu Naidu leaves for Atmakur from his residence in Amaravati for his party's 'Chalo Atmakur’ rally, called against alleged political violence by YSRCP.

11:05 am: Hearing to be held in TADA court in Jammu on October 1 in case against Yasin Malik for killing of four Indian Air Force (IAF) personnel in Kashmir.

11:00 am: Trial court Judge arrives at AIIMS Trauma centre where a temporary court has been set up to record #Unnao rape survivor's statement.

10:55 am: Prime Minister Narendra Modi arrives in Mathura; received by UP CM Yogi Adityanath. He will be launching the National Animal Disease Control Programme (NADCP) in the district today

10:40 am: Telugu Desam Party (TDP) leader Nara Lokesh on being put under preventive custody: This is dictatorship, we are being stopped in an undemocratic way. TDP leaders and workers are being harassed. YSRCP MLAs are openly threatening us, saying police is with them. The ruling party is trying to strangulate our party across Andhra Pradesh. We were doing our activities in a democratic manner but our entire leadership was put under house arrest. This is the murder of democracy.

10:27 am: Syed Akbaruddin, India's Permanent Representative to United Nations on United Nations Assistance Mission in Afghanistan (UAMA): It is the Afghan people who will implement and bear the consequences of any agreements arrived at. Hence, outcomes which have constitutional legitimacy & political mandate & are arrived at in an inclusive & democratic way alone can ensure stability. We, therefore, support the Secretary General’s call for direct talks. The international community needs to continue its support by fulfilling the commitments made to the Afghan security forces in their fight against the scourge of terrorism. Support & safe havens enjoyed from beyond Afghanistan’s borders by groups such as Taliban, Haqqani Network, Da'esh, as well as Al Qaeda & its proscribed affiliates, including Lashkar-e-Taiba & Jaish-e-Mohammed, must be addressed.

10:10 am: S Parveen, wife of Tabrez Ansari: My husband was lynched, earlier case was registered under section 302 (murder) but it was later changed to section 304 (culpable homicide) under administration's influence. There is an attempt to save the culprits,CBI should investigate the case.

10:07 am: Federation of Western India Cine Employees writes to Ministry of External Affairs to "cancel the visa of singer and actor Diljit Dosanjh who accepted the invitation of a Pakistan National Rehan Siddiqi for a performance in America of September 21."

10:00 am: Jammu & Kashmir: The LeT terrorist Asif was responsible for recent shootout and injuries to three family members of a fruit trader in Sopore. The injured also included a young girl Asma Jan. He was also responsible for shooting at a migrant labour Shafi Alam in Sopore

9:56 am: S Karthik, SP Seraikela Kharsawan on Tabrez Ansari lynching case: Chargesheet has been filed against 11 accused, murder case could not be made based on the findings of the postmortem report. We have charge-sheeted it as culpable homicide

9:43 am: Razzak Baloch, Organiser, Baloch Human Rights Council: Pakistan wants to hide what they are doing in Balochistan & crying at United Nations over Kashmir, this is hypocrisy. Balochistan was a country, do they allow media& UN delegation to go & find out what they did to my country?

9:41 am: Switzerland: The Baloch Human Rights Council organised a briefing on 'The Humanitarian Crisis in Balochistan' at a special tent at Broken Chair, in front of the United Nations in Geneva, yesterday.

9:37 am: Amaravati: Telugu Desam Party (TDP) Chief N Chandrababu Naidu isn't being allowed to meet media. He has been put under preventive custody at his house in view of party's ‘Chalo Atmakur’ rally today called against alleged political violence by YSRCP.

9:33 am: Krishna District, Andhra Pradesh: Former TDP MLA Tangirala Sowmya house arrested at Nandigama town after Sowmya and other TDP leaders sat on protest in front of her house for party's ‘Chalo Atmakur’ rally against YSRCP.

9:20 am: Telugu Desam Party (TDP) Chief N Chandrababu Naidu and his son, Nara Lokesh have been put under preventive detention at their house

9:00 am: Telugu Desam Party (TDP) Chief N. Chandrababu Naidu and his son, Nara Lokesh have been put under house arrest.

8:55 am: Special Judge in Allahabad High Court, Surendra Kumar Yadav, has asked CBI to submit a report that BJP leader Kalyan Singh is no longer a Governor, after CBI filed an application in the matter. Matter to be heard today

8:50 am: Andhra Pradesh: TDP leaders and workers who were trying to go to Chandrababu Naidu's residence stopped by police and taken into preventive custody.

8:47 am: TDP Chief & former Andhra Pradesh Chief Minister Chandrababu Naidu to sit on a hunger strike from 8 am to 8 pm today

8:34 am: Switzerland: Posters highlighting the 'Pashtun genocide in Pakistan', put up across the city of Geneva. 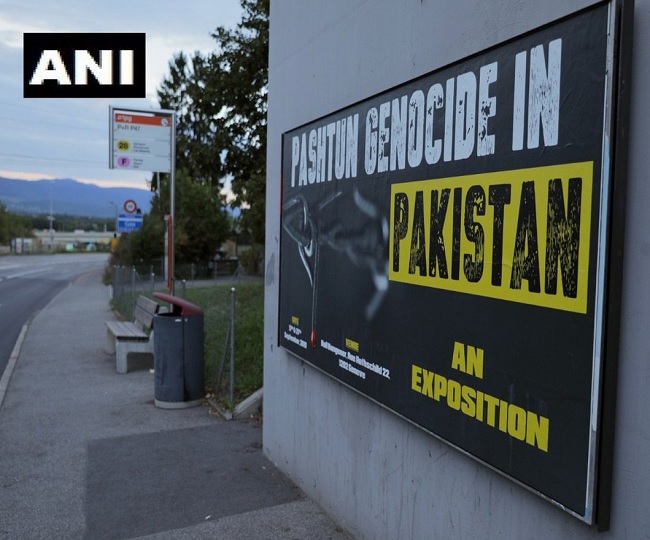 8:20 am: After Delhi High Court's notification and permission to setup a temporary court in AIIMS Trauma centre, fast court to commence the testimony of #Unnao rape survivor from today

7:55 am: UP Special Task Force (STF) has arrested criminal Prince Agarwal who was wanted in several cases. He was carrying a reward of Rs 50,000 on his arrest. The accused also fled police custody twice & prison once. He has been arrested from Udham Singh Nagar of Uttarakhand.

7:00 am: Odisha Assembly Speaker, Dr.Surjya Narayan Patro: Met a Chinese delegation at the state Assembly in Bhubaneswar. They gave a proposal of building 90% of houses & buildings near the factory sites and 10% at the other suitable places