Follow us for the latest updates and breaking news developments from India and around the world.

New Delhi | Jagran News Desk: Each and everything that happens around us impacts in some way and that's why it becomes important for us to know what's happening around the world. Thus at English Jagran, we provide our readers with 360-degree coverage in all genres to give them a brief insight about what's happening around the world. Stay with us as we shift our focus to the Bihar Elections Results 2020, Joe Biden and Kamala Devi Harris's election victory, Prime Minister Narendra Modi's launch event of development projects in Varanasi, the buildup to the IPL 2020 final, coronavirus in India and much more.

05:50 pm: Governor Arif Mohammed Khan, who was diagnosed with #COVID19 on 7th Nov is admitted to Govt Medical College, Thiruvananthapuram for close monitoring. He is clinically stable. A medical board was formed to optimize his clinical management: PRO, Kerala Raj Bhavan

05:35 pm: Bihar: Bharatiya Janata Party workers in Patna Sahib constituency are preparing sweets for distribution, ahead of the counting for #BiharElections that will be held tomorrow. Bihar voted in three phases on 28th October, 3rd and 7th November.

Also Read
Farmers Protest Highlights: 'Our movement will go on,' says farmers after..

02:25 pm: Delhi High Court issues summons and notice to respondent news channels in the suit filed by Bollywood filmmakers seeking directions to Republic TV and Times Now, and their prominent faces, to refrain from making irresponsible, derogatory and defamatory remarks against Bollywood

02:00 pm: Kerala Minister KT Jaleel arrives at Customs Department to appear before it, in connection with "bringing Quran copies through UAE Consulate & its distribution in the State"

01:40 pm: Maharashtra Governor BS Koshyari spoke to State Home Minister Anil Deshmukh & conveyed to him his concern over the security and health of Republic TV Editor Arnab Goswami. He also asked the Home Minister to allow Goswami's family to see him and to speak to him: Raj Bhavan

12:30 pm: A college student died allegedly by suicide at her residence in Shadnagar, Telangana due to family's financial stress. "She was studying at Delhi's Lady Shri Ram College. Her PG accommodation rent was Rs12,000. We couldn't support her. Hope no student faces this," says her father

11:06 am: The cities/towns where air quality is ‘moderate’ or below, only green crackers be sold and the timings for use and bursting of crackers be restricted to two hours during festivals, like Diwali, Chhath, New Year/Christmas Eve as may be specified by the State, says NGT.

11:05 am: National Green Tribunal pronounces total ban against sale or use of all kinds of firecrackers in Delhi NCR from midnight today till 30th November.

11:02 am: Petition filed in the Supreme Court challenging the October 2018 draft notification published by the Ministry of Environment, Forest and Climate Change relating to demarcation of 56,825 square kilometres as the Western Ghats ecologically sensitive zones

10:50 am: Prime Minister Narendra Modi inaugurates and lays the foundation stone of various development projects in Varanasi, via video conferencing. The total cost of these projects is Rs. 614 crores.

Prime Minister Narendra Modi inaugurates and lays the foundation stone of various development projects in Varanasi, via video conferencing. The total cost of these projects is Rs. 614 crores pic.twitter.com/ZqJFjsom7A

10:35 am: Congress party is still a part of the People's Alliance for the Gupkar Declaration and we will fight DDC elections together: Farooq Abdullah, National Conference leader and Former J&K CM

10:20 am: UT administration starts functioning from Jammu today as Civil Secretariat opens in the winter capital. Visuals of J&K Lieutenant Governor Manoj Sinha taking guard of honour at the Secretariat during the annual Darbar move of offices from Srinagar to Jammu. 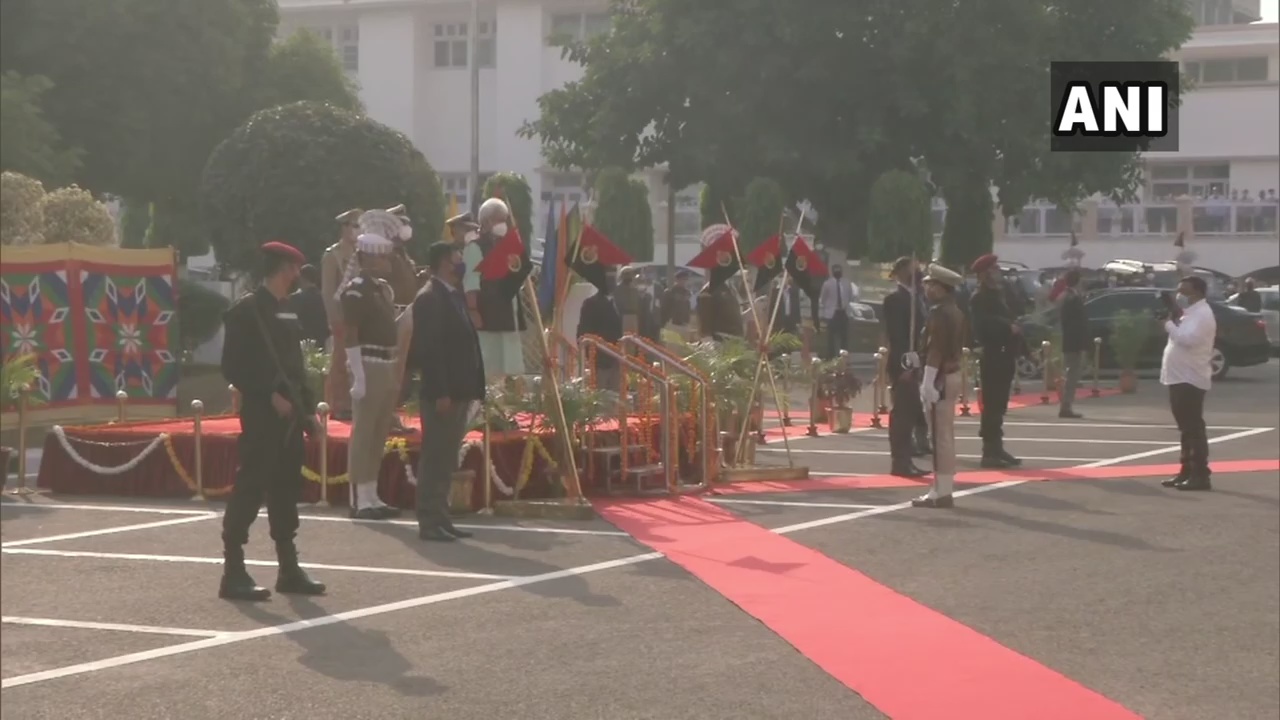 Mumbai: Film producer Firoz Nadiadwala's wife and four drug peddlers who were arrested by Narcotics Control Bureau in a drug-related case yesterday, being taken for their medical examination

09:45 am: Madhya Pradesh: Seven people killed, five injured in a collision between a car and dumper truck in Satna. All injured referred to a hospital in Rewa

07:50 am: Delhi: National capital continues to reel under pollution. Air Quality Index (AQI) is at 484 in Anand Vihar, 470 in Mundka, 465 Okhla Phase 2 and 468 in Wazirpur, all in 'severe category', as per Central Pollution Control Board (CPCB).

07:40 am: Air Intelligence Unit A Batch in Thiruvananthapuram Airport seized 1322.67 grams of gold from three passengers. The gold was concealed in their rectum: Commissionerate of Customs (Preventive), Kochi.

07:30 am: We have always seen her (Kamala Harris) grow up as a good child. She was very good at whatever she did & she has achieved what she wanted to do: Dr Sarala Gopalan, maternal aunty of US Vice President-elect Kamala Harris, in Chennai.