Here are the Highlights of October 5:

1:27 pm: 3 crore families, who were living in slum area and didn't have pucca houses, got an oppportunity to become 'lakhpati' with a single scheme. It is a big thing.... these people are 'lakhpati' now: PM Narendra Modi in Lucknow

1:10 pm: After 2014, our government has given permission to build over 1.13 crore houses under PM Awas Yojana, in the city. Of these, over 50 lakh houses have been built & given to the poor so far: Prime Minister Narendra Modi in Lucknow

12:55 pm: Under PM Awas Yojana, over 80% of the houses are either owned by women or they are joint onwer of these houses: Prime Minister Narendra Modi in Lucknow

12:20 pm: The situation on the Line of Actual Control is that the Chinese Air Force is still present on three air bases on their side of the LAC. We are fully deployed and prepared on our side: IAF Chief Air Chief Marshal VR Chaudhari on 89th anniversary of IAF

11:30 am: Organising Urban Conclave in Lucknow will help in drawing a new picture of this city along with other rising & upcoming cities. PM has seen a dream of new India. He has been working for it continuously. India is witnessing his dream being fulfilled: Defence Minister Rajnath Singh 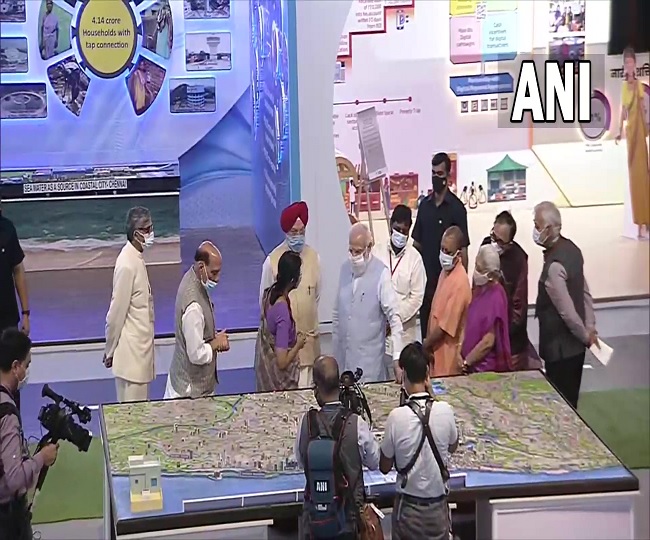 10:35 am: Congress leader Priyanka Gandhi who is under police custody after she was detained in Sitapur while on her way to Lakhimpur, has tweeted a video showing a vehicle mowing down farmers from behind. The Congress leader questioned Prime Minister Narendra Modi on why the driver of the vehicle was not yet arrested by the police

10:20 am: Ten people including two women have been arrested, in connection with stone-pelting at a police vehicle in Seemapuri, Shahdara area on 1st October. A police team had visited the area for an investigation of a case when the incident occurred: Delhi Police

10:10 am: Nepal | An aircraft of a domestic air carrier (Shree Airlines) slipped off the runway at Kathmandu Airport today; No reports of immediate damage. The airport remains operational: Kathmandu Airport authorities

9:00 am: "Narendra Modi sir, your government has kept me in detention for the last 28 hours without any order and FIR," tweets Congress leader Priyanka Gandhi Vadra

8:50 am: Cruise ship raid case | Mumbai Narcotics Control Bureau has arrested two persons- one person who was detained during a raid on the cruise ship for the second day yesterday and a drug peddler from the Jogeshwari area; both arrested persons to be produced before court today

8:30 am: We don't want people who take drugs. The govt will take strict action against tourists if they're found consuming drugs, said Goa Tourism Minister Manohar Ajgaonkar yesterday on how Goa planned to thwart tourists coming to the state with or for purpose of drug consumption.

8:15 am: Congress supporters continue to protest outside PAC guest house in Sitapur where party leader Priyanka Gandhi Vadra is detained. She was detained yesterday while she was on her way to Lakhimpur Kheri

7:55 am: About 18 people arrested after several police personnel sustained burn injuries in the wake of protest (over Lakhimpur row). More or less, the protest was peaceful but some organisations took law in their hands, didn't bother about others' lives: Vineet Bhatnagar, SP City, Meerut

7:45 am: Haryana Bharatiya Kisan Union chief Gurnam Singh Chaduni released. "Section 144 has been imposed there (Lakhimpur) and possibly, his visit could have affected law and order situation, which is why he was detained. We have released him," Meerut SSP Prabhakar Chaudhary

7:30 am: Congress names its candidates for by-elections in 3 assembly constituencies in Assam & one in Maharashtra. Jowel Tudu, Bhaskar Dahal&Manoranjan Konwar will contest for Gossaigaon, Tamulpur&Thowra seats respectively in Assam. Jitesh Antapurkar will contest for Deglur,Maharashtra