16:00 hours: I respect the forces but they can't intentionally harass people in the name of security. I have already written a letter to the Centre opposing the BSF jurisdiction issue. Our border areas are completely peaceful, we don't need their involvement, says West Bengal Chief Minister Mamata Banerjee.

15:22 hours: Those who had left the party want to come back and many from BJP also want to join Congress. There is a situation of instability in BJP. Many people (want to join Congress)... can't take so many, but those who are worthy, we will take them, says Congress' Harish Rawat.

14:49 hours: Congress leader Rahul Gandhi will visit Goa on 30 October to begin Assembly poll campaign in the state. He is expected to meet people affected by mining ban and will also meet fishermen, reports ANI.

14:30 hours: BREAKING: Winter Session of Parliament to be held from 29 November to 23 December, reports ANI.

Children's vaccine ZyCoV-D's pricing is under discussion, he added.

12:45 hours: For treatment of diseases like cancer, diabetes...and check up at primary level we took a decision to set up 1,50,000 health and wellness centres. About 79,000 above have been inaugurated in the country, says Union Health Minister Mansukh Mandaviya.

PM approved 157 new medical colleges... seats for medical students almost doubled... We worked with a total approach to ensure people are given affordable treatment, he added.

11:55 hours: I would like to re-emphasise the paramount need for discipline and unity. What should matter to each and every one of us is the strengthening of the organisation. This must override personal ambitions, says Sonia Gandhi.

11:45 hours: We must fight diabolical campaign of BJP and RSS ideologically. We must do so with conviction and expose their lies before the people if we are to win this battle, says Sonia Gandhi.

11:16 hours: Lakhimpur Kheri violence case: Supreme Court says there was a crowd of 4,000-5,000 persons who are all local people and even post-incident most of have been agitating. This is what has been reported. Then, the identification of these people should not be a problem, it added.

11:00 hours: Just In: Several civilians were injured when terrorists lobbed a grenade in the Sumbal bridge area of Bandipora today, says Jammu and Kashmir Police. 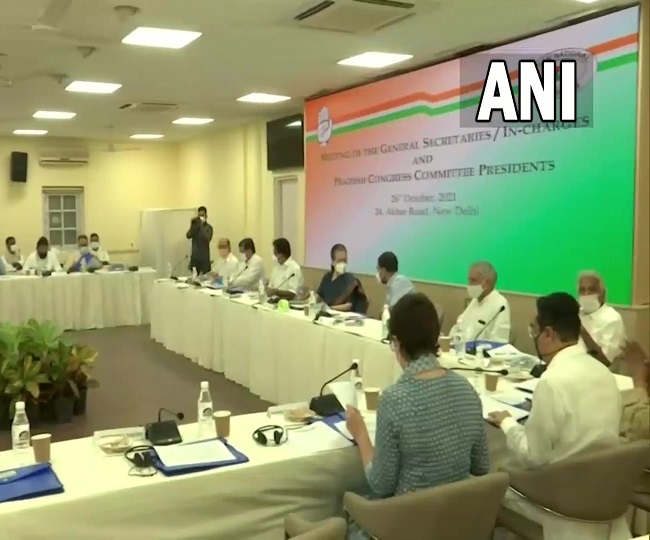 10:30 hours: There's power struggle between the two brothers (Tejashwi Yadav and Tej Pratap Yadav... It shows Laluji's impact, his son doesn't listen to him... Person who doesn't have control over his son(s), why would public listen to him, says former Bihar Deputy Chief Minister Sushil Kumar Modi.

10:15 hours: Once the bypoll ends, wagging its tail, Congress will go back to Lalu... The two can't be separated, just pretending to cut NDA's votes... In Assembly pollls people voted for NDA not RJD... this time too NDA will win the bypolls with majority, says former Bihar Deputy Chief Minister Sushil Kumar Modi.

10:00 hours: Rift between RJD and Congress is fake and 'noora kushti' (fixed fight). They have strategically announced a candidate. Congress' only aim is to make RJD win, it's not contesting to win, but to make RJD win... They will unite on the last day of polls, says former Bihar Deputy Chief Minister Sushil Kumar Modi.

9:40 hours: Over 107.22 crore vaccine doses provided to States and UTs till now. More than 12.37 crore balance and doses are still available with the States and UTs, says Union Health Ministry.

8:23 hours: Nitish Kumar has been eulogised ...PM Modi, BJP would know... Everyone was sloganeering "A PM should be like Nitish"... He was being touted as PM material...such arrogance and greed, says RJD chief Lalu Prasad Yadav.

8:04 hours: I was unwell and was in detention because of which I missed two elections, but now bye elections are happening and I have managed to come back because of people's love. On 27 October, I will address the public in bypoll seats Kusheshwar Asthan and Tarapur, says RJD chief Lalu Prasad Yadav.