13:01 hours: Toffee wrappers are no more thrown on floors but kept in pockets. Kids alert elders not to litter around. The youth are taking initiative. Some are earning wealth from waste, while some are creating awareness. There is segregation of dry and wet waste, there's awareness, says PM Modi.

12:25 hours: This 2nd phase of Swachh Bharat Mission-Urban 2.0 and AMRUT 2.0 is also an important step in fulfilling dreams of BR Ambedkar. It's our privilege that today's program has been organised at BR Ambedkar Center. He believed that urban development was pivotal to equality, says PM Modi.

12:20 hours: The aim of Swach Bharat Mission 2.0 is to make the cities garbage-free. With this 2nd phase, we also aim sewage and safety management, making cities water-secure and ensuring that uncleaned nullahs don't merge into rivers, says PM Modi.

12:18 hours: Supreme Court issues notice to the Centre and UIDAI on a petition seeking directions to eliminate the mandatory pre-condition of submitting Aadhaar details in CoWIN portal while verifying an individual for the administration of the COVID-19 vaccine, reports ANI.

11:47 hours: Swachh Bharat Mission has succeeded not only because of lakhs of toilets or bringing waste processing to 70 per cent but also because PM Modi made this project into a 'Jan Andolan', says Union Housing and Urban Affairs Minister Hardeep Singh Puri. 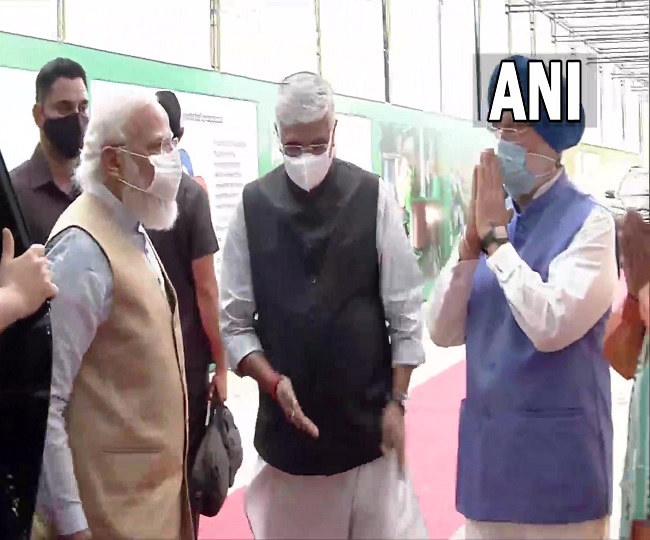 "Due to his humble personality, he has endeared himself to entire nation. His focus on empowering the poor and marginalised sections of society is exemplary. May he lead a long and healthy life," he tweets.

8:35 hours: Centre is ready for all kinds of support to establish an integrated agriculture university in State. Some farmers are not able to receive benefits of PM kisan samman yojana due to some issues with land records, we'll solve it, says MoS Agriculture Shobha Karandlaje.

8:27 hours: General MM Naravane, Chief of Army Staff, is on a two-day visit to Ladakh Sector to review the prevailing security situation and operational preparedness. He will also interact with troops deployed in the harshest terrain and weather conditions, says Indian Army.

7:54 hours: A 20-year-old man admitted to Mumbai's Cooper Hospital after being injured in a leopard attack in Goregaon area of Mumbai last night. He was going to his house with his friend when he was attacked by the leopard. This is the fifth leopard attack in the area in the last 8 days, reports ANI.

7:11 hours: I've asked officials to fill potholes within 10 days. We've identified 175 buildings as dilapidated which need to be demolished. 10 such buildings have been razed. We released Rs 1,000 crore to asphalt roads, tenders have been called, says Karnataka Revenue Minister R Ashoka.