Today, there is a special focus on the ongoing political crisis in Karnataka, the proceedings in the Parliament and the World Cup semi-final between India and New Zealand on Tuesday.

New Delhi | Jagran News Desk: Today, Jagran English is back with its Breaking News and Latest News initiative and today we will a special focus on the Karnataka Crisis, World Cup semi-finals between Indian and New Zealand, and the proceedings of the Parliament.

So here are the Highlights of July 10:

06:36 pm: Delhi Police Special Cell: Notorious gangsters Kamaljeet Singh and Sunil Malik arrested. Two semi-automatic pistols, four magazines and two dozen cartridges recovered. Both were wanted in a murder case of a businessman and carrying a total reward of Rs 40,000 on their arrest.

05:58 pm: Karnataka Crisis: "I am still confident that all of them will come back. Congress-JD(S) government which is there will be safe. None of them is leaving the party," says Congress leader DK Shivakumar.

05:42 pm: MHA Sources: Sikhs for Justice wanted to use Kartarpur Corridor for propagating their secessionist ideology. There's no concrete evidence that Pak has curbed or banned the group. India is likely to raise the issue regarding security and safety of pilgrims during Kartarpur talks on 14th.

05:28 pm: Karnataka Crisis: "Manhandling Ministers and MLAs are very annoying and unbecoming of Mumbai Police. Such hasty act by Maharashtra Government reinforces the suspicion on BJP of horse-trading. This is a black mark on the republic setup of our country," says CM Kumaraswamy.

05:07 pm: CM Captain Amarinder Singh has hailed the Govt of India’s decision to ban Sikhs for Justice (SJF) as an unlawful association, describing it as the first step towards protecting the nation from the anti-India/secessionist designs of ISI-backed organisation.

05:06 pm: Karnataka Crisis: "Today 2 more MLAs have resigned, Dr K Sudhakar and Mr MTB Nagaraj. As in the case of other MLAs, the law will take its own course. The law cannot deviate from person to person, it is uniform for one and all," says Karnataka speaker KR Ramesh Kumar.

04:48 pm: Karnataka Crisis: "I have not accepted any resignation, I can't do it overnight like that. I have given them time on 17th. I'll go through the procedure and take a decision," says Karnataka speaker KR Ramesh Kumar.

04:34 pm: "If we've set a target of USD 5 trillion it's because we're taking very strong steps for promotion of growth, incentivising investment, ensuring that investment comes. It makes a collective sense for us to draw the attention of investment, saying that this country has a correct ecosystem for it," says Nirmala Sitharaman.

04:05 pm: Karnataka Crisis: DK Shivakumar, Milind Deora, other Congress leaders who were detained, have been kept at Kalina University rest house. They were sitting outside the Renaissance - Mumbai Convention Centre Hotel when they were detained by police.

03:00 pm: Karnataka crisis: Karnataka Minister DK Shivakumar and other Congress leaders who were detained, are being taken to Kalina University rest house.

02:49 pm: India-USA trade delegation-level talks to be held on July 12 in Delhi.

02:42 pm: Karnataka Crisis: DK Shivakumar who after being denied entry was sitting outside Renaissance - Mumbai Convention Centre Hotel where 10 rebel Congress-JD(S) MLAs are staying, detained by Mumbai Police. Section 144 had been imposed in the area.

02:22 pm: Karnataka Crisis: "I requested the Governor to convey to the speaker that he should take necessary action immediately. Kumaraswamy has no moral right to continue as Chief Minister, they don't have the numbers," says BJP leader BS Yeddyurappa.

01:31 pm: Union Law Minister Ravi Shankar Prasad in Lok Sabha on if there is a proposal for reservations in judicial services: "Under Article 235, the administrative control over the members of district and subordinate judiciary in the states vest with the concerned High Court."

"Initiation of the proposal for appointment of Judges in HCs vests with Chief Justice. Further, a state in consultation with HC frames rules and regulations regarding appointment, promotion, reservations etc of judicial officers in the state. Therefore, the Centre has no role in this."

01:26 pm: Karnataka Crisis: "Looks like there is martial law in Maharashtra, a minister (Karnataka Minister DK Shivakumar) who has a booking in the hotel (in Mumbai) is not allowed to enter inside(to meet rebel MLAs)," says Congress leader Adhir Ranjan Chaudhary.

01:25 pm: "Ministry revoked the passport of Nirav Modi as per provisions of Section 10(3)(c) of the Passports Act,1967, on 23 Feb 2018. The Ministry has no means to verify the travels, if any, of Nirav Modi and passport used for such travels by him," says V Muraleedharan, MOS MEA in Lok Sabha.

01:01 pm: "There is no shortage of judges in SC. SC has reached its full strength of 31 Judges for the first time since 2009. However, as on 1 July,19 there are 403 vacancies in the High Courts," says Union Minister RS Prasad in Lok Sabha.

"Appointment of Judges in the High Courts is a continuous collaborative process between the Executive and the Judiciary, as it requires consultation and approval from various Constitutional Authorities," he added.

12:49 pm: "As per applicable Disciplinary Rules, Government has the right to proceed against corrupt officials on basis of evidence and to retire Government officials prematurely on the ground of lack of integrity and ineffectiveness," says Dr Jitendra Singh, MoS, Min of Personnel, Public Grievances and Pensions, in Lok Sabha.

12:42 pm: "Illegal immigrants are a security threat to the state. Yesterday a terror module that operates from Bangladesh was busted in Bengaluru. I call upon the Centre to extend NRC to Karnataka and Bengluru to weed out Bangladeshis who've come here illegally," says BJP MP Tejasvi Surya in Lok Sabha.

12:35 pm: "Pakistan's ISI is known for giving support to Khalistani elements in Canada for anti-India activities. We have a zero-tolerance policy on this & have taken many important steps against it," says MoS Home G Kishan Reddy in Lok Sabha.

"On 12th July, Assembly session will begin but they don't have the numbers, it will be an illegal session. It is not too late, you (Karnataka CM, HD Kumaraswamy) should resign and make way for a BJP government," he added.

12:22 pm: Delhi HC refused to entertain a PIL seeking a reduction in fares of Delhi metro. The petition had also opposed the free metro ride to the women as proposed. HC said it's for Government to decide whether to give fare exemption to women or not and also imposed a cost of Rs 10,000 on the petitioner.

11:51 am: Karnataka crisis: CM HD Kumaraswamy cancels all his official programmes in the wake of the political crisis in the state.

11:42 am: Death toll at 29 in Malad wall collapse incident after a patient who was admitted to KEM hospital passed away yesterday. The compound wall of Malad MCGM Reservoir at Pimpripada has collapsed on 2nd July due to heavy rainfall.

11:35 am: Arunachal Pradesh: Following heavy rainfall, 5 buildings in Bana-Seppa area were washed away on July 8; no casualties reported.

11:22 am: Karnataka crisis: Former Karnataka CM and BJP leader BS Yeddyurappa and other BJP leaders hold a protest outside Vidhana Soudha in Bengaluru. 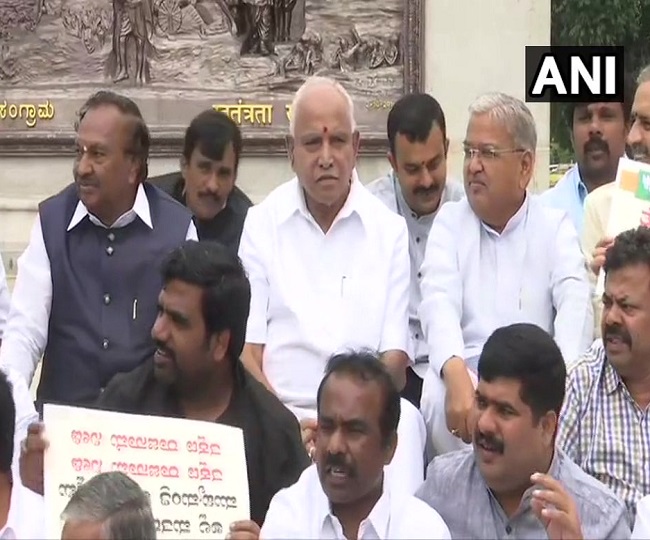 11:22 am: Karnataka Crisis: Mumbai: Section 144 (prohibits an assembly of more than 4 people in an area) was imposed in Powai Police station limits with effect from July 9 to July 12 (both dates inclusive) because of "likelihood of breach of peace and disturbance of public tranquillity".

11:21 am: Supreme Court agrees for the listing of PIL challenging validity of Article 370 of the Constitution.

10:54 am: Karnataka Crisis: "We don't intend to insult DK Shivakumar. We've faith in him but there is a reason we have taken this step. Friendship, love, and affection are on one side, with gratitude and respect we request him to understand why we cannot meet him today," says rebel Congress leader B Basavaraj.

10:49 am: Karnataka Crisis: "They should be proud of a customer like me. I love Mumbai. I love this hotel. Let them cancel. I have other rooms also," says Congress leader DK Shivakumar.

"I'll not go without meeting my friends. I can't go by you (rebel Karnataka MLAs not ready to meet him), they'll call me. Their heart will break. I'm in touch already, hearts of both of us are beating," he added.

10:36 am: SpiceJet: Extremely saddened to share that our technician Rohit Pandey passed away last night in an unfortunate incident at Kolkata airport. He was doing maintenance work in right-hand main landing gear wheel well area of a Q400 aircraft which was parked in Bay No. 32 at the airport.

10:33 am: Karnataka rebel Congress and JD(S) MLAs are moving Supreme Court accusing the speaker of abandoning his constitutional duty and deliberately delaying acceptance of their resignations.

10:31 am: Death toll rises to 4 in the incident where an under-construction building collapsed in Pulikeshi Nagar, Bengaluru, earlier today. 7 injured people are undergoing treatment.

10:30 am: NSA Ajit Doval's son Vivek Doval's cross-examination in the defamation case filed by him against Congress leader Jairam Ramesh and Caravan Magazine has been deferred for 29, 30, 31 July by Delhi's Rouse Avenue court. Earlier it was scheduled for 10, 11, 12 July.

10:22 am: Karnataka Minister DK Shivakumar's booking at the Renaissance Mumbai Convention Centre Hotel has been cancelled by the hotel quoting "some emergency in the hotel".

10:19 am: Congress MP Kodikunnil Suresh has given Adjournment Motion Notice in Lok Sabha over "Dalit youth killed in Gujarat by Upper caste people".

10:18 am: Karnataka crisis: "They're no friends and no enemies. Anyone can turn at any moment. I'm trying to contact them(rebel MLAs).I'll get a call. Their heart is beating to meet their friend," says Congress leader DK Shivakumar.

10:09 am: Mumbai: Central Railway: PL-32 Panvel-CSMT Harbour line local held up between Sewri and Cotton Green due to a technical problem. The technical team on the job to restore.

09:44 am: National Investigation Agency (NIA) to ANI on the residence of Kashmiri separatist leader Asiya Andrabi attached: There is no search being carried out. As per provisions of the Unlawful Activities (Prevention) Act, her house used for terrorist activity has been attached.

09:43 am: 4-year-old girl rescued by NDRF & Civil Defence Quick Response Team (QRT) in the incident where an under-construction building collapsed in Pulikeshi Nagar, Bengaluru, earlier today. 9 people have been rescued so far.