New Delhi | Jagran News Desk: Jagran English focuses on all the top news of the day to give our readers a brief insight into what’s happening in the world and how it might impact them.

Here are the Highlights of January 29: 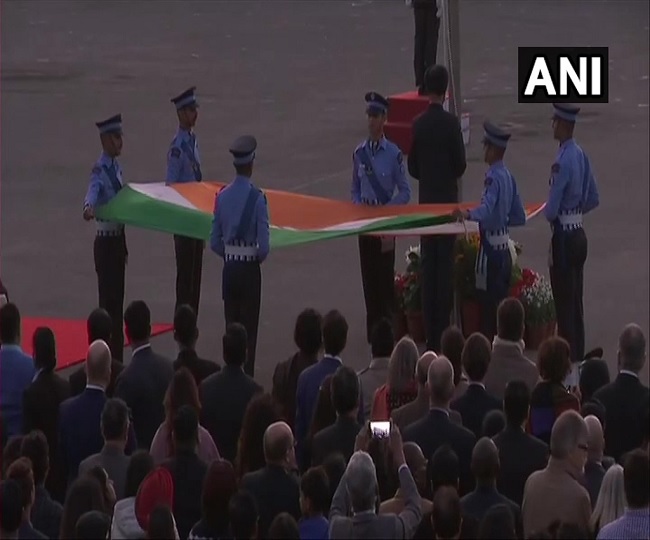 6:00 pm: "Abide With Me" a hymn, being played by a military band at Beating Retreat ceremony at Vijay Chowk

#WATCH "Abide With Me" a hymn, being played by a military band at Beating Retreat ceremony at Vijay Chowk pic.twitter.com/6sOQwti7YB

5:45 pm: #WATCH Beating Retreat ceremony at Vijay Chowk, Delhi; The ceremony is being performed by three wings of the Indian Armed Forces.

#WATCH Beating Retreat ceremony at Vijay Chowk, Delhi; The ceremony is being performed by three wings of the Indian Armed Forces. pic.twitter.com/15vS1XbyZX 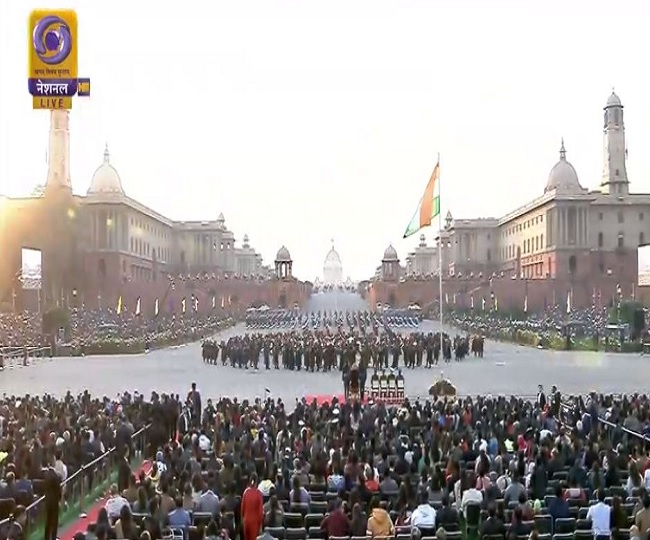 5:15 pm: Delhi: Beating Retreat ceremony at Vijay Chowk; The ceremony is being performed by three wings of the Indian Armed Forces. 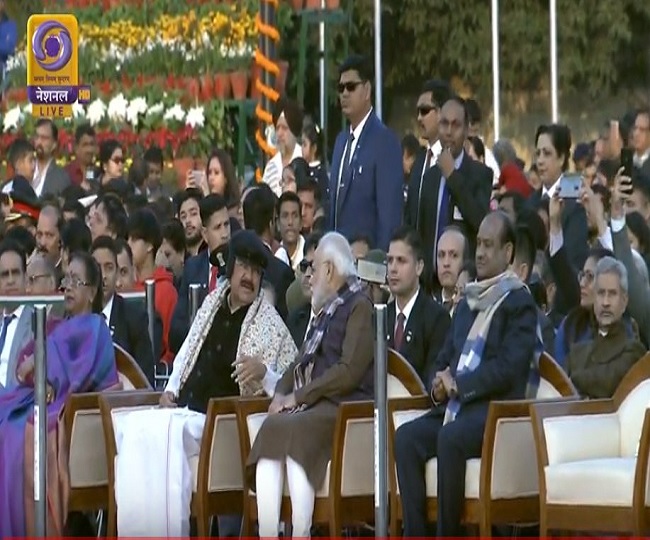 5:10 pm: Embassy of India in Beijing, China: The embassy is working hard to ensure smooth evacuation of our citizens from Hubei Province. We are already in touch with many sections of Indian Community in Hubei, including our students. We urge all Indian citizens from Hubei who have not yet contacted the Embassy to do so urgently on our hotlines (+8618610952903, +8618612083629, +8618612083617) or dedicated email ID helpdesk.beijing@mea.gov.in 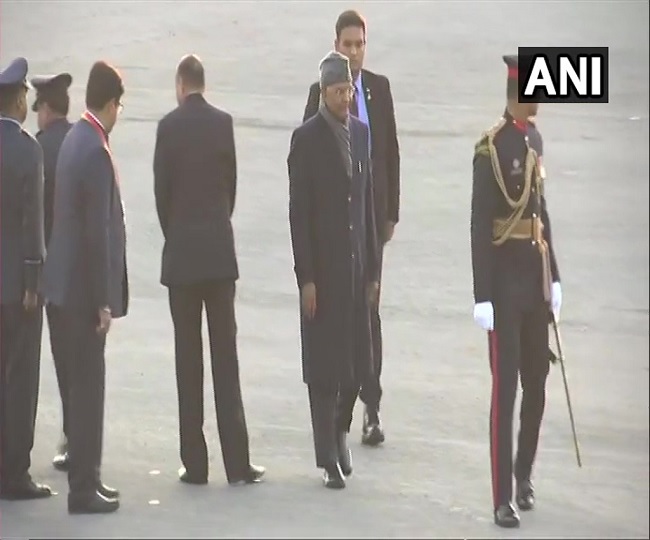 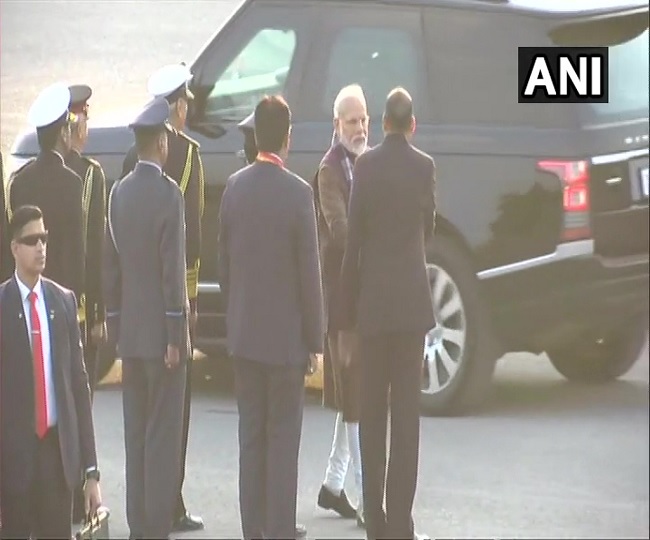 4:50 pm: Shiromani Akali Dal Chief Sukhbir Singh Badal: The SAD-BJP alliance is not just a political alliance. It is bound by emotions, for peace, the future, and interests of Punjab and the country. There were some misunderstandings that have been sorted out. We never broke the alliance. We just decided to contest the election separately. We've been supporting CAA from the beginning. We went to Rajnath Singh&Amit Shah for granting citizenship for Sikhs who have been subjected to persecution in Pak, Afghanistan.

4:40 pm: Union HM Amit Shah, in Najafgarh: They (AAP) had said that they'll purify the air of Delhi. They did drama, printed advertisements, but if anyone is responsible for the level of pollution in Delhi today then it's the inactivity of Kejriwal govt. Delhi's air has poison mixed in it

4:35 pm: Former Madhya Pradesh CM Shivraj Singh Chouhan: No force in the world can stop the implementation of Citizenship Amendment Act. Narendra Modi is the Prime Minister who does not fear threats. He is a lion. If Narendra Modi is a Lord Ram, then Amit Shah is Lord Hanuman.

4:00 pm: Kanhaiya Kumar, former JNU Students Union (JNUSU) President, on Sharjeel Imam: If someone gives an instigating speech then FIR can be registered against him under various sections...But if sedition laws are misused then it is not right for the unity and security of our country. I have ideological differences with Sharjeel Imam. But if we talk about laws then we should speak what is right. No one in country has the right to spread violence. But the manner in which govt machinery is being misused, should be questioned.

3:20 pm: South East District (Delhi) DCP Chinmay Biswal, on gun brandished at Shaheen Bagh yesterday: We've registered FIR & started an investigation. The video is being investigated, visuals are being studied. Owner of the pistol was questioned, the pistol was found to be licensed. The FIR was registered under IPC section 336 (Act endangering life or personal safety of others), section 506 (Punishment for criminal intimidation) and the Arms Act.

3:10 pm: Air India spokesperson: Air India has advised all its cockpit and cabin crew, who travel to South East Asian cities, to wear N95 masks in the light of #Coronovirus outbreak.

2:42 pm: Usha Rani, Saina Nehwal's mother: I am very happy. Saina was doing well in sports and she will do well in politics also. BJP is doing good for the country, Saina is very hardworking and will work hard in this field as well.

2:37 pm: Pune Police: Over 250 protesters have been detained in Pune city till now, over their protest against #CitizenshipAmendmentAct and NRC, in support of the 'Bharat Bandh' called by multiple organisations today, against CAA and NRC.

2:30 pm: Union Minister & BJP leader Prakash Javadekar: We will study (the order) and if necessary, present a letter and application. BJP is putting up a balanced campaign with positivity...BJP is a thinking party which takes cognisance, so I'll give a comment after studying the order

2:25 pm: MEA: We urge the parties to engage with each other, including on the recent proposals put forward by the United States, and find an acceptable two-State solution for peaceful coexistence. We will continue to follow developments in the region and engage with the parties concerned.

2:20 pm: MEA: India has been consistently supportive of Palestinian cause. India has also called for a two-State solution to the Israeli-Palestinian issue. We reiterate our view that final status issues should be resolved through direct negotiations between the two &be acceptable to both

2:10 pm: Tamil Nadu: Government Rajaji Hospital in Madurai has opened a new isolation ward. Dr Sangumani, Dean says, "No case for coronavirus has been reported so far. We have opened this ward as a precautionary measure& for welfare of patients"

2:04 pm: Election Commission issues notice to BJP MP Parvesh Singh Verma for prima facie violating Model Code of Conduct (MCC). EC has given him time till 12 noon on 30th January to provide an explanation, failing which EC will take a decision on the matter.

1:55 pm: GoAir statement: GoAir has suspended Kunal Kamra from flying with the airline till further notice

1:30 pm: Puducherry: Congress MLA Dhanavelu who was suspended from the party for 'anti-party activities', took out a protest march today against Chief Minister V Narayanasamy demanding a probe into corruption allegations against him.

1:25 pm: US House passes bill against China interfering in Dalai Lama's succession. The bill mentions that China will be subject to sanctions if it interferes in the succession process.

1:10 pm: JNU Student Sharjeel Imam who was arrested from Jehanabad, Bihar yesterday has been brought to Delhi. He will be produced in Patiala House Court later today. Imam has been booked in a sedition case by Delhi Police.

12:40 pm: Activist Tapan Bose at Jantar Mantar during anti-CAA/NRC protest: Pakistan is not an enemy country, ruling class of India & Pakistan are alike. Our armies are alike too, their army kills their people and our army kills our people, there is no difference between them.

12:30 pm: Luqmaan Chaudhary, owner of the gun that was brandished at Shaheen Bagh yesterday: I have been living in Shaheen Bagh for 30 years, I went there to speak to protestors to open the road. I always carry my gun with me, someone saw it & took it out, I don't know who it was. 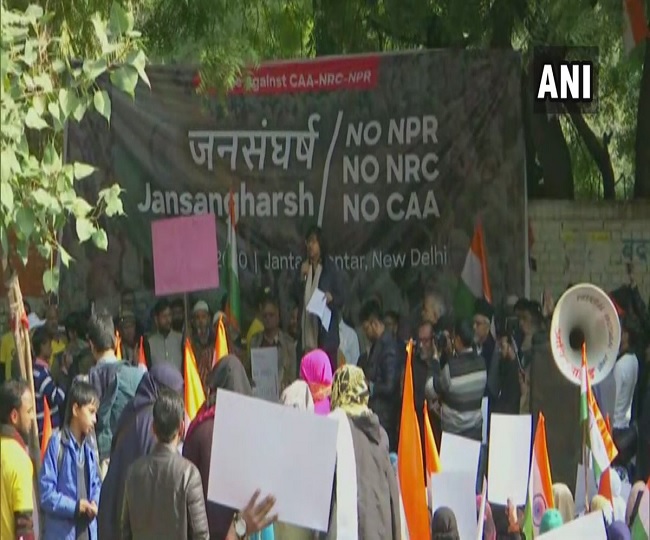 12:00 pm: SpiceJet statement: SpiceJet has decided to suspend Kunal Kamra (for heckling journalist Arnab Goswami on an IndiGo flight yesterday) from flying with the airline till further notice.

11:55 am: G Parameshwara, Senior Congress leader: We are waiting for the Karnataka cabinet expansion. Many from BJP are ready to leave the party as there are several contenders for Deputy CM post and Ministerial posts

11:42 am: Kerala Governor Arif Mohammad Khan on protest against him by United Democratic Front (UDF) MLAs in state assembly: I have seen much worse than this when I was a member of the assembly (Uttar Pradesh).

11:36 am: Ajay Alok, JDU on Prashant Kishor: This man is not trustworthy.He could not win the trust of Modi ji and Nitish ji. He works for AAP, talks to Rahul Gandhi, sits with Mamata didi. Who will trust him? We are happy this #coronavirus is leaving us, he can go wherever he wants to.

11:30 am: Asian Cricket Council(ACC) Sources: ACC will have a meeting sometime in February to discuss issues related to the hosting of the Asia Cup this year. This year Pakistan is the host so it is Pakistan's call if they want to host the tournament or not.

11:20 am: British adventurer Bear Grylls with actor Rajinikanth after shooting an episode of 'Man vs Wild' at Bandipur forest in Karnataka, yesterday.

11:10 am: Popular Front of India (PFI) Advocate KC Nazeer to ANI: We are here (ED office) to seek time of 2 months. Our Chairman is suffering from cancer and he is unable to come due to health issues.

11:00 am: Nashik accident: Total 26 dead & 32 injured after a bus and a rickshaw fell into a well after ramming into each other, in Deola area yesterday. Rescue operation has been called off.

10:40 am: Delhi Police: Mohammad Luqmaan (owner of the gun that was brandished at Shaheen Bagh yesterday) has been called for questioning today. A case has been registered in the matter & investigation is underway.

10:30 am: Supreme Court dismisses petition (of 2012 Delhi gangrape convict Mukesh) and says there is no merit in the contention, alleged torture can't be a ground, all documents were placed before the President & he had taken them into consideration.

10:25 am: Ramesh Chennithala, Leader of Opposition in Kerala assembly: Governor Arif Mohammad Khan is ridiculing the Kerala assembly for passing a resolution requesting central government to withdraw CAA. He is acting as the state president of BJP, as a tool in the hands of RSS & BJP.

10:10 am: Office of Union Sports Minister: India's ace javelin thrower Neeraj Chopra has qualified for Tokyo Olympics 2020. Neeraj threw 87.86 m at the ACNW League Meet in South Africa and qualified after crossing the benchmark of 85 m.

9:55 am: Army Chief General Manoj Mukund Naravane on the security situation in Jammu and Kashmir: The situation has improved after the abrogation of article 370.

9:48 am: Army Chief MM Naravane: Two battalions have already taken out. Once the Bodoland Territorial Council (BTC) elections are over, we would reduce more troops. In the next 2-2.5 yrs, we would concentrate fully on conventional warfare in North-East rather on counter-insurgency operations

9:40 am: New Foreign Secretary Harsh Vardhan Shringla: I am as committed to the ministry's role in nation-building as I was 36 years ago when I entered these portals as a young professional. I look forward to work under the guidance of Prime Minister and External Affairs Minister 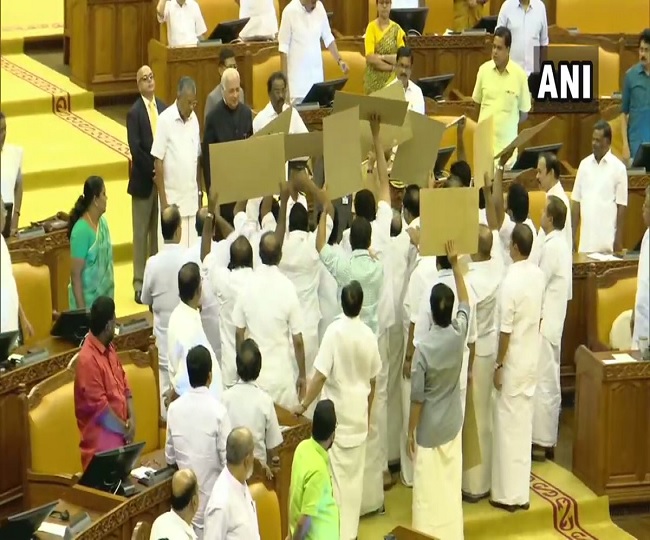 8:30 am: Mumbai | Members of Bahujan Kranti Morcha block a railway track in Kanjurmarg station during a protest against #CitizenshipAmendmentAct and #NationalRegisterofCitizens. The organization has called for a 'Bharat Bandh' today. 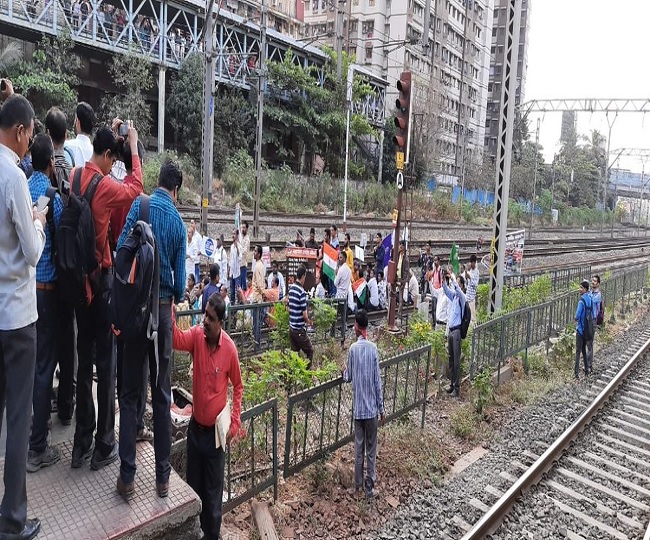 8:05 am: Clear sky in Delhi this morning; visuals from India Gate area. Minimum temperature of 10.5°C was recorded in the national capital yesterday. 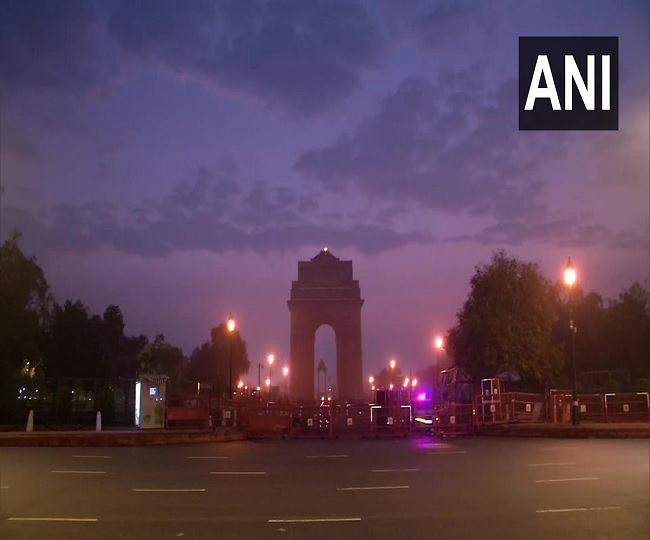 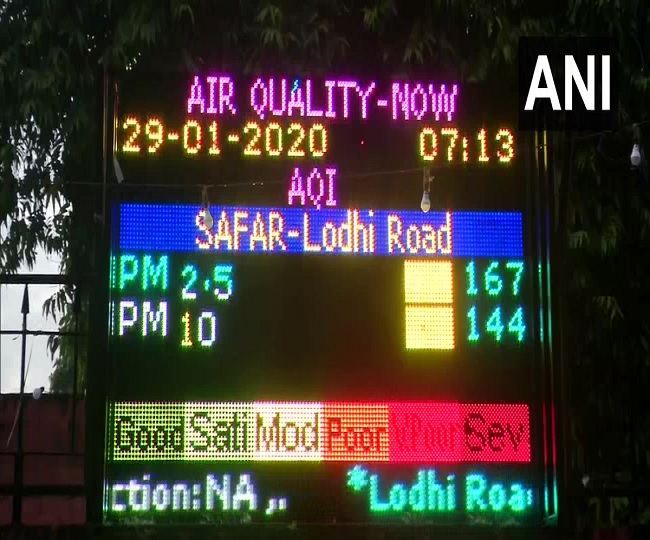 7:55 am: 2012 Delhi gang-rape case: Supreme Court will pronounce today the order on the plea by one of the convicts, Mukesh, against the rejection of his mercy petition by the President.

7:30 am: Madhya Pradesh: One person suspected with #coronavirus was admitted to a hospital in Ujjain. District Magistrate Shashank Mishra says, "The patient returned from China few days back. He is kept in isolation and his blood samples have been sent to Pune for tests".