Prime Minister Narendra Modi will address a webinar for consultation on the roadmap for effective implementation of Union Budget 2021-22 in the infrastructure sector today at 4 pm. A PMO release said the webinar will witness the participation of more than 200 panellists including representatives of major financial institutions and funds, concessionaires and contractors, consultants and subject matter experts.

Here are the Highlights of Feb 16:

12;10 pm; Supreme Court agrees to consider a plea seeking prioritisation in giving #COVID19 vaccination to judges, lawyers and judicial staff across the country. "We will consider this, matter after two weeks," says CJI SA Bobde.

11;55 am; Today when India is entering the 75th year of independence, there can be no bigger an occasion to remember & take inspiration from the contribution of such great men (Maharaja Suheldev), their sacrifice, struggle, valour & martyrdom: PM Narendra Modi

11;50 am; It's a misfortune that those who dedicated their lives to protect India were not given their due position - the position they deserved. The injustice & manipulation done to those who created history, by those who wrote history is being corrected by today's India: PM Narendra Modi

11;40 am; History of India is not just what was written by those who enslaved this country and those with a slave mentality. India's history is that too which the common people of India have kept in the folk stories of India, that which has been carried forward by generations: PM Modi

11;35 am; This #Basant has come with new hopes and new enthusiasm for India that is moving forward, leaving behind the despair of the pandemic: Prime Minister Narendra Modi at the foundation stone laying ceremony of Maharaja Suheldev Memorial and development work of Chittaura Lake in UP

11;25 am; Delhi Police writes to Zoom, seeking details of Zoom meeting over toolkit matter in connection with 26th January violence.

11;20 am; Supreme Court directs AIIMS Gorakhpur to conduct the examinations for 11 first-year students whose attendance was low due to #COVID19

10;50 am; Maharashtra: A 26-year-old doctor allegedly died by suicide at Nayar Hospital in Mumbai. His body was found in his room & has been sent for postmortem. Reason behind the suicide yet to be ascertained. Police registered an Accidental Death Report. Further investigation is underway

10;40 am; Search and rescue operation underway at Tapovan tunnel in Joshimath of Chamoli district. A total of 11 bodies recovered from the tunnel so far, 58 bodies in total till now. The region was hit by a flash flood on February 7th after a glacial burst.

10:20 am; We conducted an impartial investigation in North-East Delhi violence using technology & evidence. 1 constable lost his life while many personnel got injured. Didn't discriminate on the basis of religion & registered 755 cases. Nearly 1,800 were arrested: Delhi Police Commissioner

10:10 am: MP: A bus, carrying around 54 passengers, fell into a canal in Sidhi after the driver lost control over it. 7 people rescued, search underway for rest of the passengers. A team is present at spot, operation is underway. Bus was going from Sidhi to Satna when the incident occurred

10:00 am: Shubman Gill sustained a blow on his left forearm while fielding on Day 3 of the 2nd Test. He has been taken for a precautionary scan. The BCCI medical team is assessing him. He won't be fielding today: BCCI

9:50 am: Moradabad: FASTag becomes mandatory for all vehicles from today; visuals from a toll plaza on Delhi-Lucknow national highway.

9:30 am: West Bengal: House of TMC MLA Nihar Ranjan Ghosh & party's office, in Malda, was vandalised last night by unidentified people. The MLA says, "I was at party office with workers when around 150 people suddenly came & started vandalising everything. I've filed a Police complaint."

9:20 am: Delhi: 6 people injured in a fight between neighbours over the falling of a motorcycle in Jahangirpuri area last night. A police investigation is underway.

9:10 am: Afghan President Ashraf Ghani sends through Afghan embassy in India, a Chadar towards Ajmer Sharif Dargah on 809th Urs of Khwaja Moinuddin Chishty. His letter to the Dargah Chairman reads, "singular honour to be offering the Chadar...Chishty Order still thriving in Afghanistan"

8:40 am: I'm fortunate to prepare clothes for Ramlalla. I handed it over to CM. It'll be presented to Ramlalla on #BasantPanchami. It's made out of Khadi, we've prepared wardrobe for an entire week. We wanted to create awareness about Khadi among people: Manish Tripathi, fashion designer

8:30 am: Lucknow: Clothes of Khadi fabric made for Ramlalla by a fashion deisgner, in collaboration with Khadi and Village Industries Board of the state. The clothes were handed over to CM Yogi Adityanath yesterday.

8:15 am: Uttarakhand: A total of 11 bodies recovered from Tapovan tunnel in Joshimath of Chamoli district so far; 58 bodies in total. 146 more bodies yet to be found.

7:45 am: Maharashtra: Five killed and at least five injured in a collision between multiple vehicles on Mumbai - Pune Expressway near Khopoli last night. The injured were taken to a hospital. 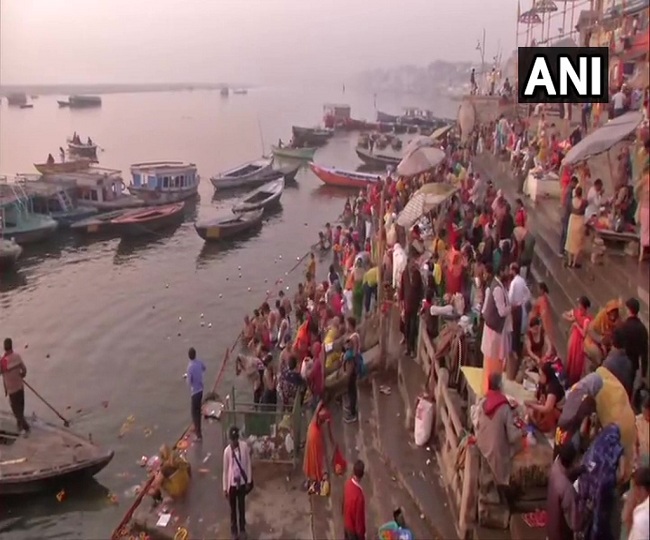 7:15 am: Volunteers collecting money for Ram Temple construction write down the name of households that don't donate. I don't know why they are marking the houses... RSS is doing what the Nazis did in Germany: Former Karnataka Chief Minister HD Kumaraswamy