New Delhi | Jagran News Desk: In our 'Breaking News, Latest Updates' breaking blog, we at English Jagran will focus on the COVID-19 pandemic and the Omicron variant. So far, five cases of the new strain have been detected in India. Experts suggest that people must continue following appropriate COVID behaviour to check the spread of the new variant.

Besides COVID-19, we will also focus on cyclone Jawad that has weakened into a deep depression on its way to Odisha. However, the India Meteorological Department (IMD) has predicted that 'very heavy' to 'heavy' rainfall will lash 13 districts of Odisha on Sunday.

14:30 hours: Gondwana Jan Sandesh Yatra started today, and will reach various districts of Uttar Pradesh. Members of the Samajwadi Party and Gondwana Gantantra Party will work together to remove BJP from power. They have only spread hatred, hunger and poverty in the state, says Samajwadi Party chief Akhilesh Yadav.

Also Read
Har Ghar Tiranga: How To Register At harghartiranga.com To Hoist..

13:33 hours: Also Read - Jagran Explainer: Why some experts believe that Indian COVID-19 vaccines might be more effective against Omicron

12:54 hours: A Tanzania returnee has tested positive for COVID19, his sample has been sent for genome sequencing. He is currently admitted to a hospital. His close contacts are being investigated, says Mumbai Mayor Kishori Pednekar.

12:28 hours: On Friday last week, Rajya Sabha Chairman M Venkaiah Naidu discussed with some opposition leaders and ministers and urged both sides to further discuss their stated views on the suspension of 12 members of the House in the wake of the demand of Opposition for it’s revocation, reports ANI.

Also Read
Har Ghar Tiranga: How to Upload Your Picture Or Selfie On..

12:25 hours: Rajya Sabha has lost 52.30 per cent of the scheduled sitting time during the first week of the ongoing winter session that concluded last Friday on account of "disruptions and forced adjournments", reports ANI.

12:00 hours: Samples of 12 out of 17 positive passengers were sent for genome sequencing and one of them, who arrived from Tanzania, tested Omicron positive according to preliminary reports, says Delhi Health Minister Satyendar Jain.

11:32 hours: BREAKING: First omicron case detected in Delhi. The patient admitted to LNJP Hospital had returned from Tanzania. Till now, 17 people who tested positive for Covid have been admitted to the hospital, says Delhi Health Minister Satyendar Jain.

11:24 hours: Until Pakistan stops sending terrorists to India and dropping drugs and weapons in our areas via drones, it is useless and futile to hold any trade-related talks with Pakistan, says Congress MP Manish Tewari.

11:12 hours: More than 35,000 jawans of the country's police force, BSF and CAPF have sacrificed their lives for the country. On behalf of the country, I pay tribute to all the soldiers who made the supreme sacrifice for the nation, says Union Home Minister Amit Shah on 57th BSF Raising Day.

10:32 hours: BREAKING: It is a moment of great pride as over 50 per cent of the eligible population are now fully vaccinated, says Union Health Minister Dr Mansukh Mandaviya.

9:35 hours: There is low visibility at Pune due to fog. Current visibility is below 100m. As a result, all flights are delayed for the next few hours, says Pune Airport.

9:30 hours: Indian Army to take part in the 11th edition of exercise 'EKUVERIN' between India and Maldives to be conducted at Kadhdhoo Island, Maldives from 6 to 19 December, says Union Defence Ministry.

9:25 hours: Just In: The government of Puducherry makes COVID-19 vaccination compulsory in the Union Territory with immediate effect. 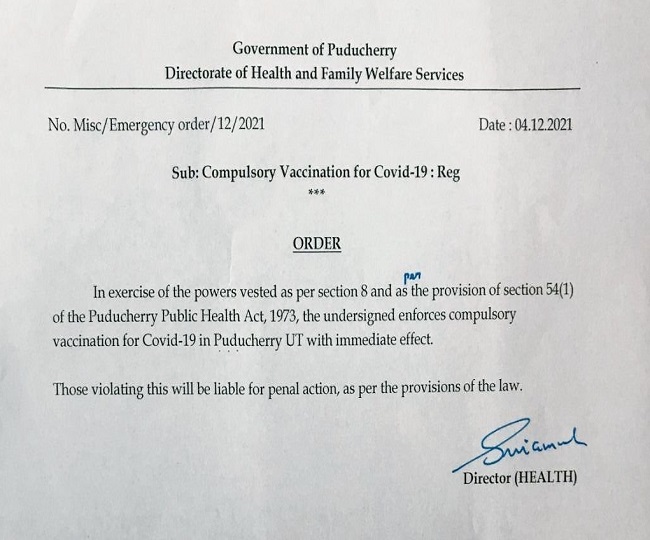 9:07 hours: The unfortunate incident leading to the killing of civilians at Oting, Mon is highly condemnable. High-level SIT will investigate and justice delivered as per the law of the land. Appeal for peace from all sections, tweets Nagaland Chief Minister Neiphiu Rio.

8:43 hours: The last few years have borne great witness to the transformation of the lives of the average Indians -- empowering them and enabling them to deliver their potential. The lives of Indians are getting better with each passing day, says Vice President M Venkaiah Naidu.

8:10 hours: Following a religion is an academic activity to know yourself and shouldn't become a cause for blood-shed and activities against the country. Left and Liberals are responsible for bitterness between us (Hindu-Muslim). Congress amplified it for vote bank, says Assam Chief Minister Himanta Biswa Sarma.

7:55 hours: Haryana Government has suggested (to the Central Government) that the area of the state in the radius of up to 100 km around Delhi should be kept in the National Capital Region (NCR) and the districts that don't fall in this area should be taken out of NCR, says Chief Minister Manohar Lal Khattar.

7:45 hours: Hello and welcome to the 'Breaking News, Latest Updates' breaking blog of English Jagran where you can catch all the LIVE Updates of the day.