New Delhi | Jagran News Desk: At Jagran English, we try to focus on all the top news of the day to give our readers a brief insight of what's happening in India and around the world so that they stay updated with all the latest trends.

Today our focus will remain on the coronavirus crisis. A new strain of the deadly pathogen discovered in the United Kingdom has alarmed the authorities with many countries including India, UAE imposing travelling restrictions on UK flyers. The new strain is said to be more dangerous and spreads faster. However, the government yesterday said, that the mutant strain of coronavirus found in the United Kingdom was not seen in the samples tested from various parts of India.

Here are the Highlights of December 23:

2:30 pm: Government will study the award and all its aspects carefully in consultation with its counsels. After such consultations, the Government will consider all options and take a decision on further course of action, including legal remedies before appropriate fora: Finance Ministry

2:25 pm: It is stated that the award in the arbitration case under India-UK Agreement for Promotion & Protection of Investments invoked by Cairn Energy Plc & Cairn UK Holdings Limited against Government of India has been passed: Ministry of Finance

2:20 pm: Maharashtra State Human Rights Commission has issued summons to BMC Municipal Commissioner IS Chahal to appear before it in connection with a complaint received regarding demolition of property belonging to actress Kangana Ranaut

2:10 pm: This election has proved that no matter what you do against National Conference, you can't put an end to its existence. Only Almighty or public has that power. Spread lies & propaganda but truth will come out someday: National Conference leader Omar Abdullah on DDC polls results

2:00 pm: The DDC election result is a victory of the policies of the Govt of India, and of the Jammu & Kashmir administration in successfully conducting the polls. The greatest win is for the locals who have endorsed the country's democratic system: BJP leader Ram Madhav

1:50 pm: If didi (Mamata Banerjee) wants to refute the statistics & numbers related to West Bengal which were presented by the Union Home Minister, then she is welcome to present them publicly and explain them in a dissected manner, to the public: Dilip Ghosh, BJP West Bengal President

1:45 pm: The TMC is following the BJP by doing a roadshow at the same place. But they must follow the good examples. Why haven't they released the Rs 6,000 annuity sum to farmers of the state under the Central govt's Kisan Samman Nidhi scheme: Dilip Ghosh, BJP West Bengal President

1:30 pm: Lodhi Road is closed from Safdarjung Madarsa to Lodhi flyover due to a demonstration by the Aam Aadmi Party. It will remain closed for next 3 to 4 hours: Delhi Traffic Police

1:05 pm: Indian Army chief General MM Naravane undertook on the spot inspection of the state of habitat of troops on the forward line of defences at Rechin La. He appreciated the efforts made by the formation to make troops comfortable along the LAC: Indian Army

11:30 am: Kerala: Special CBI court in Thiruvananthapuram sentences accused Fr. Thomas Kottoor & Sister Sephy to life imprisonment in the case pertaining to the murder of 19-year-old sister Abhaya in 1992.

11:00 pm: Delhi HC directs state govt to ensure that adequate testing & follow up checking of people diagnosed with COVID-19 shall be done keeping in view the latest guidelines issued by the Centre regarding passengers coming from UK. A new coronavirus strain has been found in UK.

10:10 am: Bihar: General Administration Department has dismissed three judicial officers from service. The dismissals will be effective from February 2014. They were caught in compromising position with women at a hotel in Nepal in 2014.

9:50 am: In her application, Mukerjea said that jail authorities were asking her to wear the convict's uniform even though she is an under-trial accused. Next date of hearing on her application is January 5

9:40 am: Sheena Bora murder case: Accused Indrani Mukerjea has filed an application before special CBI court in Mumbai, seeking exemption from wearing convict's uniform (green saree) in prison. The court has asked Byculla Jail to file a reply on the application

9:15 am: On Farmers Day, I greet farmers of the country. They have provided the country with food security. Some farmers are agitating against farm laws. Govt is holding talks with them with full sensitivity. I hope that they'll end their agitation soon: Defence Minister Rajnath Singh

8:30 am: Uttarakhand HC placed Dehradun district judge Prashant Joshi under suspension on charges that he used pvt car for travelling to a camp court. In its order, HC said that FIR is registered against the car's owner. Joshi attached with District Judgeship’s headquarter Rudraprayag.

8:15 am: Delhi: A thick layer of fog engulfs the national capital; visuals from Jhansi Road and Dayabasti. Delhi is likely to record a minimum of 4 degrees Celsius temperature today, according to IMD. 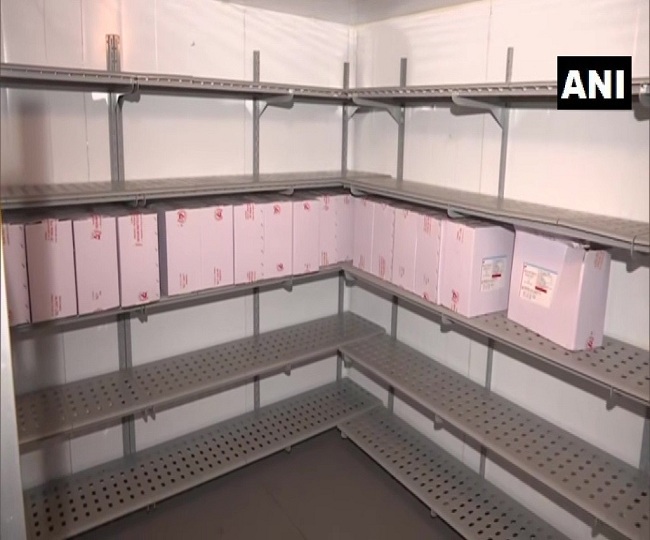 7:00 am: Assam: A human milk bank has been set up at Satribari Christian Hospital in Guwahati. "We can collect milk from mothers who are willing to donate, pasteurize & store it for up to six months," said Dr Devajit Sarma, paediatric & neonatal care specialist at the hospital