Today we will focus on the coronavirus situation in the country and the subsequent restrictions imposed by several state government in wake of the current rise in the cases and deaths due to the deadly pathogen. Many states, including Rajasthan, Gujarat, Uttar Pradesh have re-imposed night curfews in several districts and strict restrictions in containment areas due to the rise in daily cases. Meanwhile, the Union Health Ministry has said that India has the lowest per million cases of coronavirus in the world and the average daily positivity rate stood at 3.72 last week.

Here are the Highlights of December 2:

2:20 pm: National Green Tribunal extends ban on the sale and use of all kinds of firecrackers during the COVID-19 pandemic, in the National Capital Region and all cities/towns in the country where the ambient air quality falls under the ‘poor’ and above category.

2:05 pm: Based on the satisfactory result of the first two trials, this has been planned. We're one centre of the 24 centres across India. Total 25,800 volunteers will be given the vaccine dose in phase 3, with 1,000 volunteers here: Dr Shanta Dutta, Scientist G and Director, ICMR-NICED

1:45 pm: Haryana Yoga Council's meet concluded in presence of CM & Swami Ramdev. It was decided to increase number of Yogashalas to 2000, to include Yoga as a subject in education, to celebrate 1st Sunday of the month as a Yoga Day, and to recruit Yoga instructors: Haryana Health Minister

1:00 pm: I think they're doing clinical trial on about 1600-1800 people in Karnataka. CM has officially announced & given first dose today through Vydehi institution. I hope 3rd phase will be very successful & will be devoid of adverse effects on any individual: Health Minister K Sudhakar

12:50 pm: Karnataka: Chief Minister BS Yediyurappa virtually inaugurates Phase 3 of clinical trial of Covaxin being developed by Bharat Biotech The trials will be conducted at Vydehi Institute of Medical Sciences and Research Centre in Bengaluru

12:45 pm: UK authorises Pfizer-BioNTech COVID-19 vaccine, to be made available across the country from next week

12:40 pm: Kangana Ranaut files caveat in Supreme Court, requesting that no order be passed without hearing her in case Brihanmumbai Municipal Corporation challenges relief given to her by Bombay High Court order in property demolition matter

12:30 pm: Gujarat High Court orders compulsory community service at COVID19 care centres for those who do not wear masks, directs State Government to issue a notification

12:25 pm: The scheme which was conceived as a means to provide housing for the poor, was used to construct bunglows by unfair means: Jitendra Singh, Union Minister

12:15 pm: We had a long time demand for an unbiased investigation into the Roshni land scam. But over the years the successive govts' leaders were themselves beneficiaries of the scam because of which a probe wasn't allowed. Now it is all out in the open: Union Minister Jitendra Singh

11:45 am: India has also contributed to the largest drop in cases region-wide, from approximately 20 million to about 6 million. The percentage drop in the malaria cases was 71.8% and deaths was 73.9% between 2000 to 2019: Ministry of Health

11:30 am: The World Malaria Report 2020 released by WHO, indicates India has made considerable progress in reducing its malaria burden. India is the only high endemic country which has reported a decline of 17.6% in 2019 as compared to 2018: Ministry of Health

11:00 am: Delhi HC issues notice to Centre & others, on a plea seeking to stop collection of data through Central Monitoring System, NATGRID & NETRA. The plea filed by petitioner CPIL said that these three systems create a 360 degrees surveillance on public & breach their right to privacy

10:00 am: Tamil Nadu: Three NDRF teams arrive at Tirunelveli, to move towards low-lying areas, in view of cyclone Burevi.

9:55 am: In COVID times, Lucknow Municipal Corporation will progress towards achieving the 'Aatmanirbhar' goal with the listing of municipal bonds worth Rs 200 crores. The Corporation is committed to improving the lives of the citizens living in its jurisdiction: UP CM Yogi Adityanath

9:25 am: Tamil Nadu: Two teams of National Disaster Response Force deployed at Thoothukudi, in view of Cyclone Burevi. It is expected to cross south Tamil Nadu between Kanniyakumari and Pamban on the morning of 4th December, as per IMD 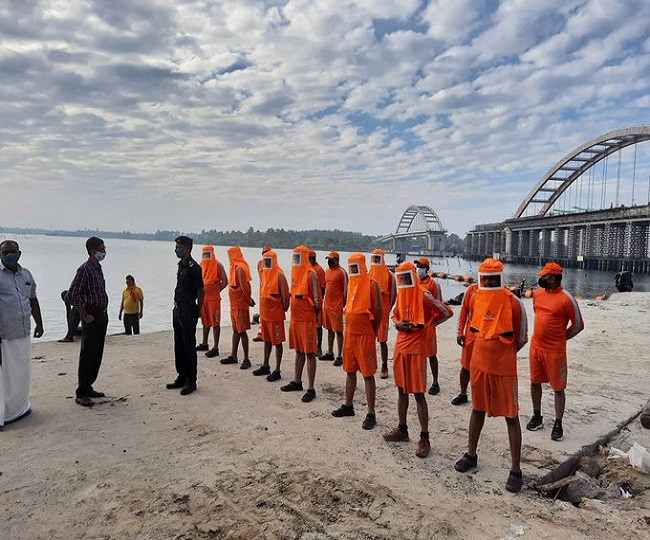 8:50 am: Uttar Pradesh Chief Minister Yogi Adityanath arrives at BSE in Mumbai for listing of bond of Lucknow Municipal Corporation

8:25 am: Police have recovered one AK-47 rifle with 1 magazine and 55 rounds of ammunition in the Baksa district: ADGP, Law and Order, Assam Police

7:50 am: BJP MLA Siddu Savadi&his supporters pushed my wife who was 3 months pregnant. She has now suffered an abortion. We'll fight this legally: Nagesh Naik, husband of BJP councillor Chandni Naik who was allegedly manhandled by Savadi during civic body polls in Bagalkot on 9Nov, K'taka

7:40 am: In wake of the Farmers' agitation, Northern Railway cancels few trains

7:10 am: MP: A family in Shivpuri alleges they were thrashed by relative of minister Suresh Dhakad after they didn't vote for BJP in bypoll. Addl SP says "Didn't receive complaint about vote. Complainant says they were tortured & they have dispute with Dhakad family. I've directed probe."