Today at Jagran English, we will be focusing on the incessant rains across the country. Apart from it, we will also focus on the Tokyo Olympics 2020 and the COVID-19 situation in India.

Here are the LIVE Updates of August 6:

#WATCH | Congress leader Rahul Gandhi and other Opposition leaders reach Jantar Mantar, Delhi to extend support to farmers in their protest against farm laws by raising slogans with a placard 'Save Farmers, Save India' pic.twitter.com/VMyi4ShlYo

12:45 pm: Johnson & Johnson applies for Emergency Use Authorization (EUA) of its single-dose COVID-19 vaccine to the Government of India

12:27 PM: Delhi | Opposition leaders board a bus from near Rakabganj Gurudwara for Jantar Mantar to join farmers in their protest against the Centre's farm laws 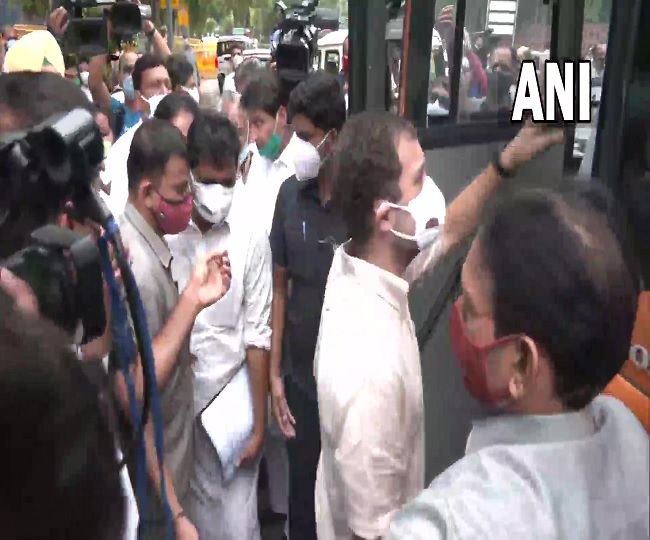 11:30 AM: Mirabai Chanu disclosed that if she wasn't given an opportunity to go to the US for her muscle operation and practice, she wouldn't have been to achieve this goal. People of Manipur were overjoyed to know how PM helped her: Manipur CM N Biren Singh

11:20 am: Congress appoints K Muraleedharan as the chairman of Campaign Committee of Kerala Pradesh Congress Committee

11:10 am: Reserve Bank of India (RBI) will conduct open market purchase of government securities of Rs 25,000 crore on August 12 under the G-sec Acquisition Programme (G-SAP 2.0). The result of the auctions will be announced the same day: RBI

11:00 am: More than 51.16 crore vaccine doses administered to States/UTs. Of this, the total consumption including wastages is 49,19,73,961 doses as per data available at 8 am today by the Union Health Ministry

10:50 am: Amazon-Future-Reliance case: Supreme Court rules in favour of Amazon and holds that Singapore's Emergency Arbitrator Award that restrained Future Retail Ltd (FRL) from going ahead with its merger deal with Reliance Retail is enforceable in Indian law.

10:35 am: Golfer Aditi Ashok ranked 2 at the end of Round 3; She has a two stroke cushion over 3rd place

10:10 am: Economic activity has broadly evolved along the lines of the Monetary Policy Committee's expectations in June and the economy is recovering from the setback of the second phase of COVID19: RBI Governor Shaktikanta Das

10:00 am: I'm happy that despite being a small state with a population of around 30 lakh, we contributed 5 Olympians this time, & overall 19 Olympians have participated from the state till date. Both Mirabai Chanu & Nilakanta Sharma have been promised govt jobs: Manipur CM N Biren Singh

9:50 am: It is not really a loss. It's a matter of pride for us to see our girls reach so far: Gurcharan Singh, brother of Gurjit Kaur who scored 2 goals in Indian Women Hockey Team's #TokyoOlympics Bronze medal match against Great Britain, today.

9:22 am: Proud of this team. We'll always remember the great performance of our Women’s Hockey Team at #Tokyo2020. We narrowly missed a medal in Women’s Hockey but this team reflects spirit of New India. Their success at #Tokyo2020 will motivate more daughters to take up Hockey: PM Modi

9:18 am: We will award Rs 50 lakhs each to the nine members of the Olympics women's hockey team who are from Haryana. I congratulate the Indian team for their praiseworthy performance at #TokyoOlympics: Haryana CM ML Khattar

9:02 am: Hockey player Neha Goyal's mother gets emotional as the Indian women's team loses to Great Britain in the Bronze medal match Winning and losing is a part of the game. I am sure the team will win again, says her mother

8:15 am: India 3 - Great Britain 4 in the fourth quarter of #TokyoOlympics hockey match for Bronze

7:55 am: "It's a proud moment for us to see our daughter scoring the crucial goals in the match. We will only pray for the team to bring the medal home..."Jo Bole So Nihaal Sat Sri Akal", says Gurcharan Singh, brother of Gurjeet Kaur who has scored two goals in the match

7:50 am: India 3 - Great Britain 2 in the second quarter of TokyoOlympics hockey match for Bronze

7:45 am: India 0 - Great Britain 1 in the second quarter of Tokyo Olympics hockey match for Bronze

7:38 am: Property Cell of Mumbai Police Crime Branch has summoned actress Sherlyn Chopra asking her to appear before it for questioning today in connection with the p*rn film production case in which businessman Raj Kundra was arrested: Mumbai Police