Here are the LIVE Updates of April 3:

1;25 pm: Bihar | 5 people killed, 1 in critical condition, in a firing in Mahmadpur village on March 29. One of the deceased was a BSF sub-inspector, who was on leave for Holi Out of 10-12 named accused, 8 have been arrested. Motorcycle used has been recovered, probe is on: SP, Madhubani

1:10 pm: Bangladesh government has decided to enforce a seven-day lockdown from April 5th as coronavirus cases and deaths are surging across the country: Bangladesh media

12;45 pm; Maharashtra: Fire breaks out at a Bajaj HealthCare unit in Tarapur MIDC, Boisar in Palghar district. Fire extinguishing operations underway. All 30 workers who were in the unit have been rescued, 2 of them injured. Details awaited.

12:15 pm: Sharad Pawar was checked upon by doctors today & his health is stable, he'll be discharged today. He has been advised rest for 7 days & after 15 days if all his health parameters are stable, surgery on his gall bladder will be performed: Maharashtra Min & NCP leader Nawab Malik

12:00 pm: All educational institutions, schools/colleges/universities/institutions will remain closed up to 15th April. All teaching/non-teaching staff will however continue to attend their respective institutions: Government of Himachal Pradesh

10:55 am: We're going to Gujarat for 2 days, it's a very sensitive region, our farmers should be careful. Outsiders are not allowed there. We've to free the state's farmers, politicians, and press: Rakesh Tikait, BKU

10:45 am: The Centre is responsible, who else can it be? It's their youth wing. They were saying, "Rakesh Tikait, Go Back". Where should I go? They hurled stones, used lathis. Why are they fighting us, we're farmers, we are not a political party: BKU's Rakesh Tikait on attack on his convoy

10:35 am: Trains to not arrive at Haridwar (Uttarakhand) railway station from 11-14 April due to Shahi Snan at Kumbh Mela from 12-14 April. Trains to stop at Jwalapur, Roorkee & Laksar stations where devotees will deboard, they'll be ferried in shuttle buses from there: SP GRP Manjunath TC

10:30 am: Maharashtra: All religious places in Pune to remain completely closed till April 9th in the wake of the #COVID19 situation. Visuals from Shreemant Dagdusheth Halwai Ganpati Mandir where people pray outside as the temple remains closed. 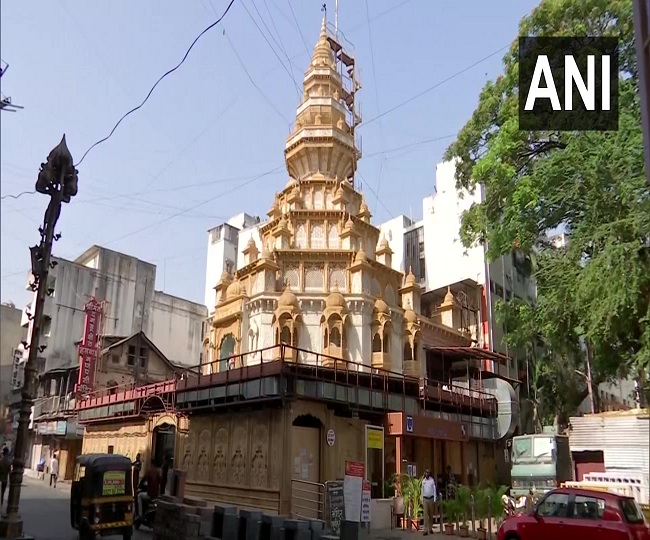 10;20 am: Chhattisgarh | Amid rising covid death toll, cemetry&graveyards run out of space in Durg Earlier, cremation was being held at 2 places.With rising deaths in last 2 days, many bodies have been brought to cremation centres. We're trying to arrange 2-3 places for it: Durg Collector

10:10 am: Karnataka: Classes at Basavanahalli High School and College suspended after 26 students tested positive for #COVID19.

9:30 am: Maharashtra: In view of more Covid restrictions, hotels in Pune to provide only takeaway&home delivery services from today. Dine-in will not be allowed at eateries in Pune for next 7 days. "Govt has done the right thing. This will help to control rising caseload", say customers

8:25 am: In a raid held in Baruipur's Padmapukur area, 41 crude bombs were recovered from a bush, yesterday. Case registered, no arrest has been made yet, probe is on: District Election Officer, South 24 Parganas, West Bengal

8:00 am: Four persons arrested in connection with an attack on a couple travelling by bus from Mangaluru to Bengaluru by a group of people. The incident took place near Pumpwell: Shashi Kumar, Mangaluru Police Commissioner

7:55 am: I fundamentally believe that America is a profound idea. The idea of freedom the way it is encapsulated in your Constitution is a very powerful idea but you have got to defend that idea. That is the real question: Congress' Rahul Gandhi

7:45 am: I don’t hear anything from US establishment about what’s happening in India. If you are saying partnership of democracies, I mean what is your view on what is going on here: Congress' Rahul Gandhi in conversation with Ambassador Nicholas Burns from Harvard Kennedy School

7:30 am: A Capitol Police officer has died after a car rammed into law enforcement at a security barricade. A second officer has been injured. The incident doesn't appear to be 'terrorism-related,' police say

7:15 am: The US Capitol locked down due to security incident: US Media