According to reports, the website was hacked in the afternoon.

Patna | Jagran News Desk: Bihar Education department’s official website was hacked on Sunday and made inaccessible for the users. The website was showing slogans like ‘Love You Pakistan’ and all the data was erased for the site. The website was also displaying quotes on Islam and Pakistan. 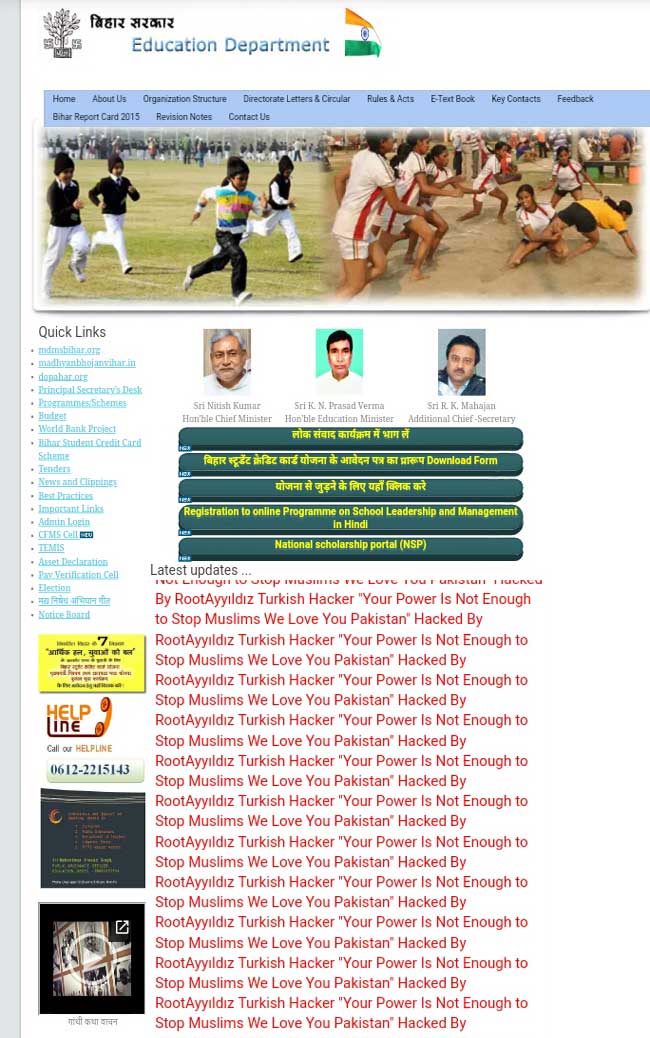 According to reports, the website was hacked in the afternoon. However, there has been no official statement on this yet.

The website is displaying quotes on Islam and Pakistan and slogans like ‘We Love Pakistan’ and ‘Love You Pakistan’.

There have been several incidents in 2019 when the Indian government websites were hacked by foreign hackers.

Earlier, Union Minister Ravi Shankar Prasad in the parliament had said that about 25 websites of Central Ministries and state governments were hacked in the first five months of 2019.

“As per the information reported to and tracked by Indian Computer Emergency Response Team (CERT-In), a total number of 199, 172, 110 and 25 websites of Central Ministries/Departments and State Governments were hacked during the year 2016, 2017, 2018 and 2019 (till May), respectively,” Electronics and IT Minister Ravi Shankar Prasad said in a written reply to the Rajya Sabha.

He noted that with the proliferation of information technology and related services, cyber attacks have become a global phenomena. “Cyberspace is virtual and borderless, thus cyber attacks can come from anywhere, anytime and by anyone...Government has taken several steps to prevent cyber security incidents and enhancing cyber security in the country,” he said.

The government has established National Critical Information Infrastructure Protection Centre (NCIIPC) for protection of critical information infrastructure in the country, as per the provisions of section 70A of the Information Technology (IT) Act, 2000, he said.

Indian Computer Emergency Response Team (CERT-In) issues alerts and advisories regarding the latest cyber threats and countermeasures on a regular basis. The organisation has also published guidelines for securing IT infrastructure which are available on its website, he said.