New Delhi | Jagran News Desk: Bharatiya Kisan Union (BKU) leader Rakesh Tikait, who has been leading the farmers' protest in the outskirts of the national capital for the past 10 months, said that he is certain that Monday's Bharat Bandh will compel the Centre to listen to the voices of farmers. Tikait said, "We are hopeful that this time (Bharat Bandh) the government will listen to our demands.

"Denying that farmers only from western Uttar Pradesh were participating in the protest, therefore, the farmers' protest will not be an issue in the 2022 Assembly elections, he said, "Farmers from all over India are with us", adding that this movement was not just restricted to any one region. Tikait further said, "No matter how long we have to stretch this protest, we will not step back."Farmers mainly from Punjab, Haryana and Uttar Pradesh have been protesting against the three contentious farm laws introduced by the Centre almost a year ago.

Here are the Highlights from SKM's Bharat Bandh:

3:15 pm: He (Yogi Adityanath) had promised in the manifesto to raise value of sugarcane to Rs 375-Rs 450, yet he increased only Rs 25. He should give an account of the losses faced. The govt has failed completely. Crops are not being sold at MSP rates: BKU leader Rakesh Tikait

2:30 pm: Our 'Bharat Bandh' was successful. We had the full support of farmers... We can't seal down everything as we have to facilitate the movement of people. We are ready for talks with govt, but no talks are happening: BKU leader Rakesh Tikait

1:25 pm: I can understand their situation. This is a farmers' issue, Congress will protest on streets. If farmers ask us to leave from here, we will go back. We have come here for farmers, there is no political agenda: Delhi Congress chief Anil Chaudhary

1:21 PM: We told him that we thank him for his support during Bandh but ours is an apolitical protest&platform. We announced earlier that we won't allow political parties on our platform. So we requested him to protest a little distant from our site. We're not opposing: Praveen Malik, BKU

1:16 pm: Some agitating farmers, at Ghazipur border, ask Delhi Congress chief Anil Chaudhary to leave from their site of protest where he had come to join them. Farmers organisations have called a Bharat Bandh today over the three farm laws.

1:10 pm: They (Rakesh Tikait) call themselves 'kisan neta & then announce Bharat Bandh, which affects economy & farmers. How does it even benefit anyone? They want to follow in footsteps of Taliban by continuing similar activities...": Bhanu Pratap Singh, BKU-BHANU President

1:05 pm: Bengaluru, Karnataka | We deployed 45 officers and 600 staff to ensure a peaceful rally. So far, 30 people have been detained near Maurya Junction: MN Anucheth, DCP Central

12:30 pm: Delhi | In view of Bharath Bandh, we barricaded the Rajokri border (Delhi-Gurugram) which resulted in a traffic jam at this section. Now, the situation is normal and traffic is smooth as we loosened the barricades: Ingit Pratap Singh, DCP South West

10:50 am: Punjab: Protesters agitating against the three farm laws sit on railway tracks at Devidaspura village in Amritsar, in support of Bharat Bandh called by farmer organisations today. 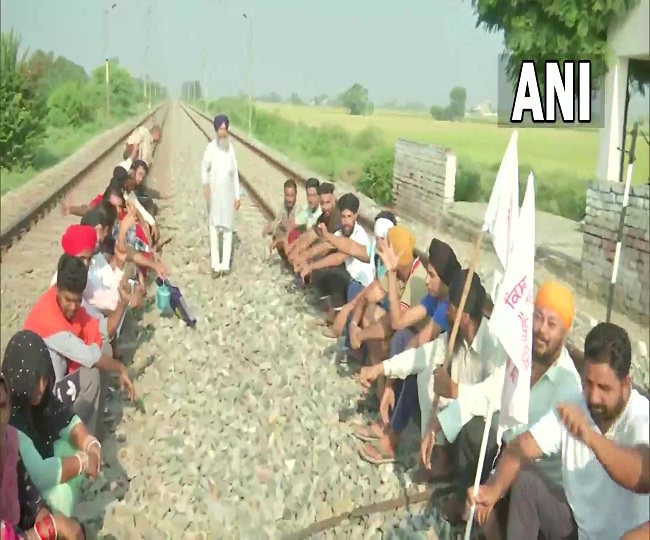 10:25 am: Farmers have blocked Delhi-Meerut Expressway at Ghazipur border Delhi. So now both NH-24 and NH-9 are blocked for traffic movement.

10:20 am: Massive traffic snarl seen at Gurugram-Delhi border as vehicles entering the national capital are being checked by Delhi Police and paramilitary jawans, in wake of Bharat Bandh called by farmer organisations today.

9:10 am: Karnataka: Various organizations protest outside Kalaburagi Central bus station as farmer organisations call for Bharat Bandh today against 3 farm laws. "Many organizations are supporting our farmers and participating in the nation-wide call for bandh," says protester K Neela 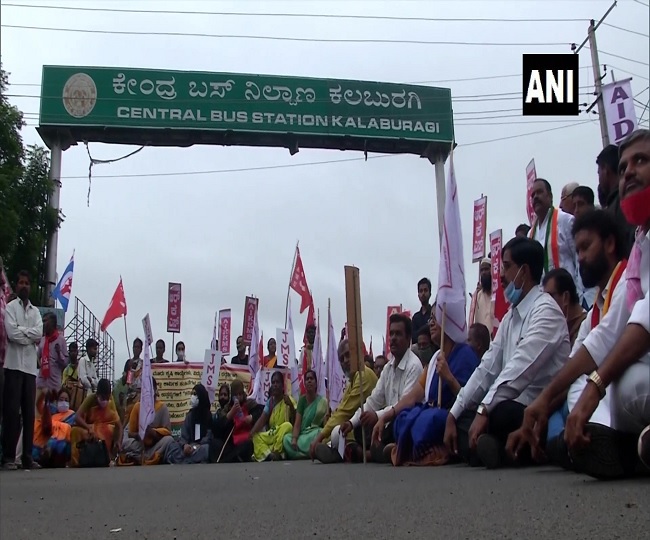 9:03 am: Amritsar, Punjab | At all locations where farmers are protesting, forces have been deployed since 5 am. Farmers' protests are peaceful, so forces have also been told to not behave untowardly with them and bring to my notice if something happens: Inspector Sanjeev Kumar 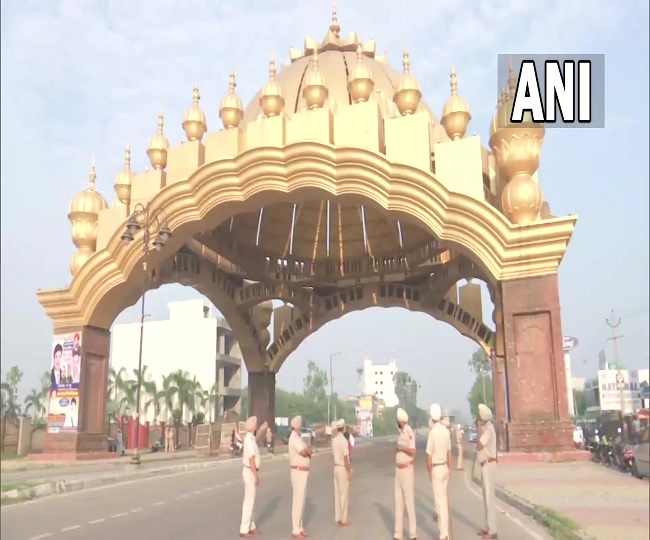 8:55 am: Bihar: RJD leader Mukesh Raushan and other members & workers of the party protest in Hajipur, in support of Bharat Bandh called by farmer organisations against the 3 farm laws. Traffic congestion seen on Hajipur-Muzaffarpur road, movement on Mahatma Gandhi Setu affected too. 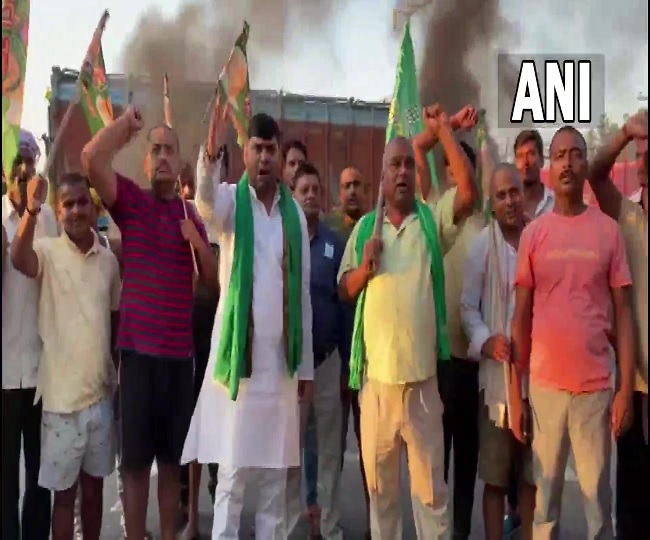 8:45 am: Farmer organisations have called a Bharat Bandh in continuation of their protest against the three farm laws. Visuals from Singhu (Delhi-Haryana) border, where protesters speak with the people moving through the area.

8:20 am: Ambulances, doctors or those going for an emergency can pass through. We've not sealed down anything, we just want to send a message. We appeal to the shopkeepers to keep their shops closed for now and open only after 4pm. No farmer is coming here from outside: Rakesh Tikait, BKU

8:16 am: Farmers protest at Ghazipur border continue as farmer organisations call a “Bharat Bandh” today against the three farm laws. The traffic movement has been closed from Uttar Pradesh towards Ghazipur due to protest.

Also Read
'Allegations against me are baseless': Sameer Wankhede denies being.. 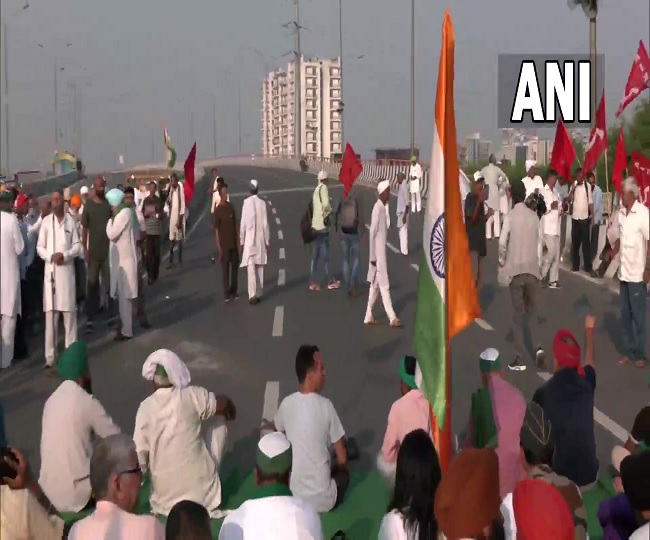 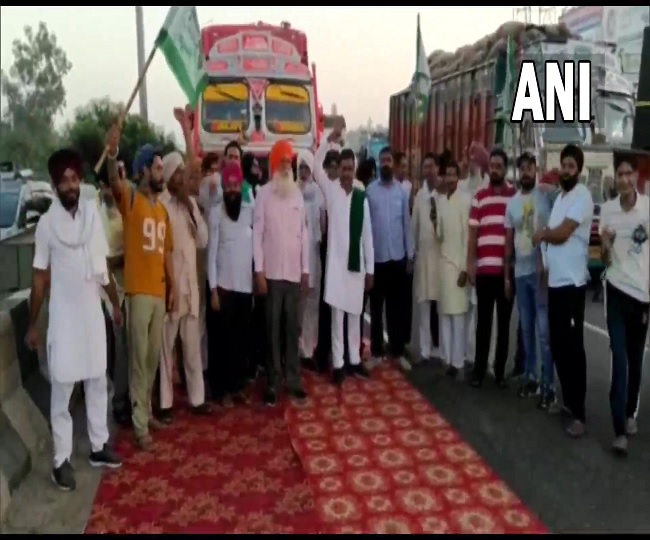 8:00 am: "In view of the Bharat bandh call by protesting farmers, we have blocked the Shambhu border (Punjab-Haryana border) till 4 pm," says a farmer 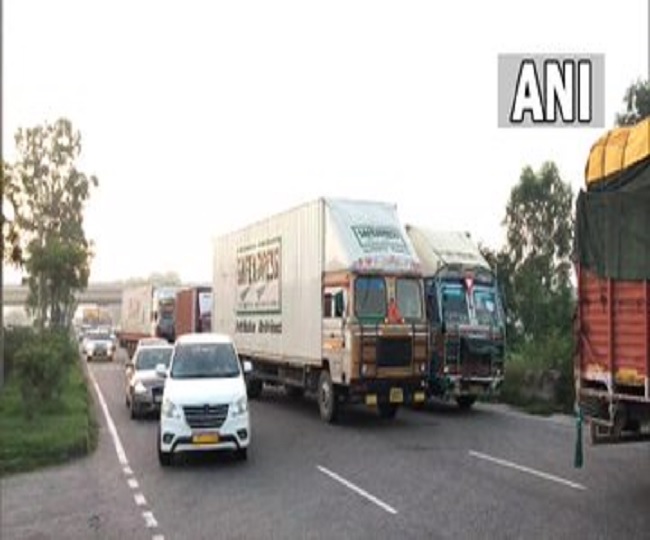 7:50 am: Haryana Police issued an advisory on Sunday stating that people may face traffic blockages on various roads and highways of the state today. Haryana Police spokesman informed that elaborate arrangements have been put in place by the civil and police administration in Haryana according to directions of the state government.

7:40 am: SKM has said that the bandh will be observed from 6 am to 4 pm tomorrow. In this period, all government and private offices, educational and other institutions, shops, industries and commercial establishments as well as public events and functions will be closed throughout the country.

7:25 am: Samyukt Kisan Morcha's (SKM) call for a 'Bharat Bandh' on Monday, to mark the first anniversary of the enactment of the three farm laws, has garnered support from more than 500 farmer organizations, 15 trade unions, political parties, six state governments and varied sections of society. State governments of Tamil Nadu, Chhattisgarh, Kerala, Punjab, Jharkhand, and Andhra Pradesh will extend their support to the 'Bharat Bandh' protest.

6:30 am: Farmers' wing of Andhra Pradesh's ruling party YSRCP has extended support to the nationwide bandh on Monday, expressing solidarity with the farmers' associations. YSR Congress Party's farmers Wing State President M.V.S. Nagi Reddy announced support for the shutdown. He told reporters that the demands that farmers have been raising in the national capital are already being implemented in Andhra Pradesh, especially providing Minimum Support Price (MSP) of the crops.

6:00 am: The Bharat Bandh, announced by the agitating farmers and supported by opposition parties, turned into a lockdown in Kerala today with both the ruling LDF and the opposition UDF backing it. The state has already announced that all university examinations scheduled for Monday would be postponed. Public transport including buses, taxis, and auto-rickshaws will be off the road, but private vehicles can apply. Shops and establishments would remain shut.