In a nine-point statement, Nikhil Jain said that Nusrat Jahan's behaviour towards him started changing after August last year during a film shoot.

New Delhi | Jagran News Desk: Day after Trinamool Congress (TMC) MP and Bengali actor Nusrat Jahan said that her marriage with Nikhil Jain is "invalid in India", the latter has released a statement, calling the former's allegations "baseless, derogatory and devoid of truth".

In a nine-point statement, Jain said that Jahan's behaviour towards him started changing after August last year during a film shoot. He further said that he asked Jahan to get their marriage registered but she avoided his requests.

Hitting out at Jahan for changing her attitude towards their married life, Jain said that the TMC MP left his flat with all her belonging and documents in November last year and shifted to her Ballygunge flat.

The businessman further said that this incident left him "disheartened", adding that he filed a Civil Suit against her in Alipore Judges' Court "for annulment of their marriage" in March this year.

"Since the matter is pending before a court of law, I refrained from giving any statement about our personal life and even today I am unable to disclose about the discord in details. But her recent statements compelled me to disclose some facts," he said. 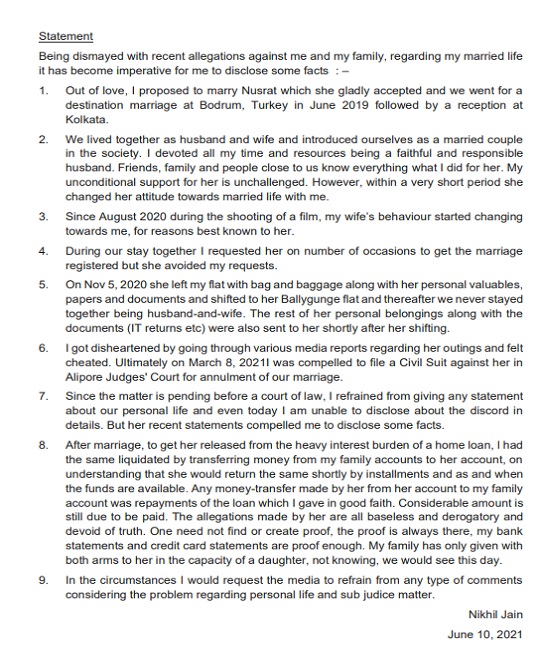 Jahan, who is a famous Tollywood actress, on Wednesday claimed that her marriage with Jain was "not legal but a live-in relationship" as their wedding in Turkey did not have recognition in Indian law.

Jahan, who is reportedly dating actor-assembly poll candidate Yash Dasgupta in recent times, said that since her marriage ceremony with Jain had taken place under Turkish Marriage Regulation, the marriage is invalid here.

"Our separation happened long back, but I did not speak about it as I intended to keep my private life to myself. Thus, my actions must not be questioned based on 'separation', by the media or anybody I am not related to. The alleged marriage is not legal, valid and tenable; and thus, was not a marriage at all in the eye of law," she had alleged.

Jahan had tied the knot with Jain at a destination wedding ceremony in Turkey in 2019, attended by a select few. After winning the Lok Sabha Elections in 2019 on a TMC ticket, Jahan hosted a grand wedding reception at a five-star hotel in Kolkata which was also attended by Chief Minister Mamata Banerjee.