Babri Masjid Demolition Case: The special court had on September 16 directed all the 32 surviving accused to remain present in the court on the day of judgment.

New Delhi | Jagran News Desk: All accused in the Babri Masjid demolition case have been acquitted by the Special CBI court in Lucknow on Wednesday. In its judgement pronounced today, the court said that the demolition was not pre-planned. Earlier today, 26 of the 32 accused had arrived at the court premises to hear the court's verdict. While six others, including senior BJP leader LK Advani, had taken part in it through video conferencing.

There were 49 accused in the case out of which 17 have passed away. Therefore, the court pronounced its judgement on the rest 32 accused, who had been asked to be physically present in the court. All 32 accused were facing charges under several sections of the Indian Penal Code, including criminal conspiracy, rioting, promoting enmity between different groups and unlawful assembly.

Here are the LIVE Updates from the big news:

3:30 pm: The decision of the CBI court to acquit all the accused in the #BabriMasjidDemolitionCase runs counter to the Supreme Court judgment & to the Constitutional spirit. The SC had held in a 5-judge bench that the destruction of the mosque as illegal: Congress leader Randeep Surjewala

2:45 pm: Today is a sad day in the history of Indian judiciary. Now, the court says there was no conspiracy. Please enlighten me, how many days of months of preparations are required to disqualify an action from being spontaneous?: Asaduddin Owaisi

2:25 pm: This is an issue of justice. This is an issue of ensuring that people who are responsible for Babri Masjid demolition should've been convicted. But they've been politically rewarded in the past by becoming HM & HRD minister. BJP is in power because of this issue: Asaduddin Owaisi

2:20 pm: Decision by CBI court is a black day for Indian judiciary because the SC already said in civil property dispute of the site as 'an egregious violation of rule of law' & 'calculated act of destroying a public place of worship': A Owaisi, AIMIM, on the #BabriMasjidDemolitionVerdict

2:15 pm: Today is a sad day in the history of Indian judiciary. Now, the court says there was no conspiracy. Please enlighten me, how many days of months of preparations are required to disqualify an action from being spontaneous?: Asaduddin Owaisi, on the #BabriMasjidDemolitionVerdict

2:00 pm: I and my party Shiv Sena, welcome the judgment and congratulate Advani ji, Murli Manohar ji, Uma Bharti ji & the people who have been acquitted in the case: Sanjay Raut, Shiv Sena.

1:45 pm: Verdict saying demolition wasn't a conspiracy & a result of circumstances, was the expected judgment. We must forget that episode. If the Babri Masjid wasn't demolished we wouldn't have seen any Bhumi Pujan for Ram Mandir: S Raut, Shiv Sena, on the #BabriMasjidDemolitionVerdict

1:30 pm: I wholeheartedly welcome the judgement by the Special Court in #BabriMasjidDemolitionCase. The judgement vindicates my personal and BJP's belief and commitment toward the Ram Janmabhoomi movement: Lal Krishna Advani after being acquitted by Special CBI Court, Lucknow

1:20 pm: It's a historic decision by the court. This proves that no conspiracy was hatched for December 6 incident in Ayodhya. Our program and rallies were not part of any conspiracy. We are happy, everyone should now be excited about Ram Mandir's construction: Murli Manohar Joshi, BJP

1:10 pm: Shiv Sena leader Sanjay Raut welcomes the verdict on the 1992 Babri Masjid demolition case and says, the decision was awaited for the last 28 years. Maharashtra Chief Minister Uddhav Thackeray and the entire Sena party welcome the judgment as it was on expected lines.

1:00 pm: Victory triumphs. CBI court’s acquittal in RJB conspiracy case was long overdue. A malicious case against some of the most respected leaders of our nation has fallen aside finally after 3 decades. Everyone should welcome d judgement: BJP leader Ram Madhav.

12:55 pm: I welcome the verdict by Special CBI Court, Lucknow acquitting all 32 accused. It proves that justice triumphed however late it may be: Defence Minister Rajnath Singh

12:40 pm: Special CBI Court observed that the 1992 Babri Masjid demolition was not pre-planned.

12:35 pm: As Judge SK Yadav begins reading out the brief of the case, the court observes that evidence against the accused are not strong enough and the Babri Mosque demolition incident was not pre-planned.

11:52 am: The verdict will be announced in Courtroom number 18, and it has been decided that only five out of 32 accused will be inside the courtroom at any time. The rest will be seated outside in the lobby.

11:30 am: Accused Ritambhara, Champat Rai, Vinay Katiyar, Brij Bhushan Sharan Singh and other accused have arrived at the CBI Special court for the hearing. The judge has also arrived. Court to pronounce the verdict in the case today.

11:00 am: Total six accused including Advani, Joshi and Uma Bharti will not appear physically in the court for the hearing today. They may appear through video-conferencing though to hear the verdict.

10:45 am: Justice SK Yadav arrives at a special court in Lucknow.

10:00 am: Sadhvi Ritambra, Sakshi Maharaj and Champat Rai, accused in the Babri Masjid demolition case reach Special CBI court in Lucknow ahead of the hearing today.

9:50 am: Lucknow: Security tightened around Special CBI court. The court will pronounce its verdict today, in Babri Masjid demolition case. 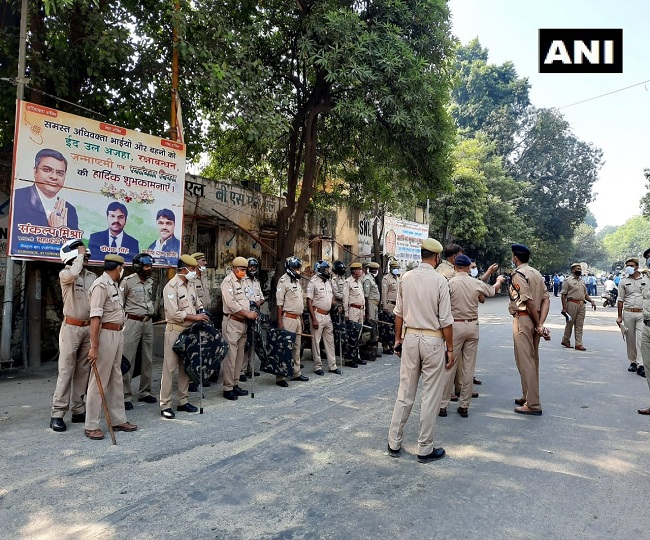 9:30 am: Special CBI Judge Surendra Kumar Yadav will start reading out the order at 10 am.

9:20 am: LK Advani, MM Joshi and Uma Bharti were allegedly on the dais near the mosque at the time of the demolition on

9:10 am: In 1993, the Central Bureau of Investigation filed a single, consolidated charge sheet against 48 people, among whom Shiv Sena founder Bal Thackeray and Kalyan Singh were also included.

8:45 am: The Supreme Court in August had set a new deadline for the special CBI court to complete the trial and deliver its verdict by September 30.

8:30 am: Special CBI court in Lucknow to pronounce their verdict today, in Babri Masjid demolition case. The court has asked all 32 accused to be present in the court. Security tightened at the court premises, ahead of the hearing.