Ayodhya Case | From 1862 to 2003: What the five ASI surveys on disputed land suggest

After 18 years of the demolition, the Allahabad High Court, in 2010, directed that the disputed land be divided equally between the three parties -- the ‘Nirmohi Akhada, Ram Lalla and Sunni Waqf Board -- fighting for its possession. But the parties denying the orders further appealed to the Supreme Court.

New Delhi | Jagran News Desk: The Ayodhya land dispute is one of the most sensitive as well as the most long-lasting issues the Indian judiciary has ever seen. The demolition of Babri Masjid in 1992 by the Hindu activists led to a communal riot in the country.

After 18 years of the demolition, the Allahabad High Court, in 2010, directed that the disputed land be divided equally between the three parties -- the ‘Nirmohi Akhada, Ram Lalla and Sunni Waqf Board -- fighting for its possession. But the parties denying the orders further appealed to the Supreme Court.

And now after 9 years of hearings by the top court, the CJI Ranjan Gogoi-led five-judge Constitution bench has concluded the hearings on the matter yesterday, as decided by the Chief Justice. The apex court has reserved its order and will pronounce the judgment in the vexatious matter going on for a very long time by November 17.

In the court hearings in the vexatious matter so far, the findings of the surveys carried out by the Archaeological Survey of India (ASI) on the 2.77-acre disputed land in Ayodhya have been considerably taken into account.

The history of surveys conducted on the site dates back to the British era when the ASI was founded by Alexander Cunningham, who conducted the very first survey on the disputed site.

Surveys from the British Era

According to Alexander Cunningham, despite Ayodhya being mentioned in several ancient Hindu texts, the historical site does not have any ‘ancient’ structures or temples and also states that Gautam Budhha spent six years in Ayodhya and called it a Buddhist center.

After Cunningham, an ASI team led by Alois Anton Führer conducted another survey of Ayodhya in 1890-91. Like Cunningham, Fuhrer also stated in his survey that the structures found in the city were modern although they occupy the sites of ancient temples which were destroyed by the Muslim invaders. Führer wrote that Ayodhya had three Hindu temples at the time of Muslim conquest: Janmasthanam (where Rama was born), Svargadvaram (where Rama was cremated) and Treta-ke-Thakur (where Rama performed a sacrifice). According to Führer, Mir Khan built the Babri mosque after demolishing the ‘Janmasthanam’ temple in 1523, according to news agency PTI.

The post-Independence surveys on the disputed site were done in a different manner.

Though no conclusive shreds of evidence were found in the surveys that could claim that the mosque was built after demolishing a temple, the politics regarding the disputed site reached its height.

A survey conducted in 1975 by ASI on 14 different sites in Ayodhya including the Babri Mosque claimed to have found the pillar-bases of “what may have been a temple at the site which must have belonged to a larger building than the Babri Mosque”. Though the report of that survey was not published at the time period it was conducted, the claim was based on a seven-page preliminary report submitted by the surveyors. The survey indicated that a large temple stood in alignment with the Babri Mosque since the 11th century, according to PTI. 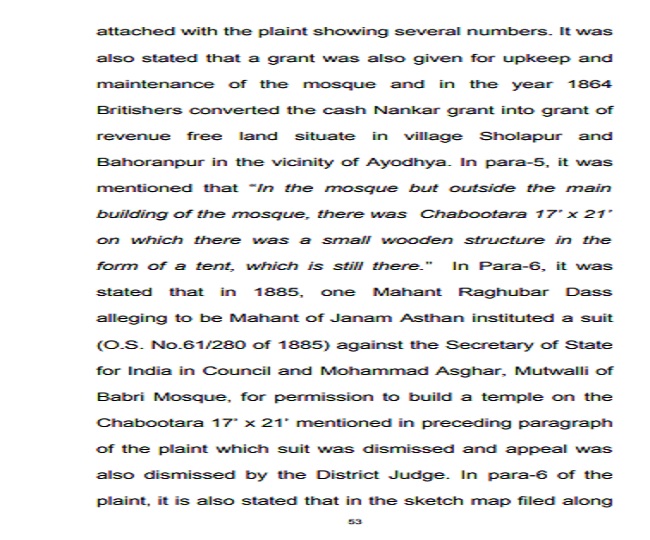 Another survey conducted on the site in 1992 to examine findings including religious sculptures and a statue of Vishnu indicated that the inner boundary of the disputed structure rests on an earlier existing structure, which ‘may’ have belonged to a temple, as reported by Indian Express in 1992.

The same year, the Babri Mosque was demolished by ‘karsevaks’ which led to a communal riot in several parts of the country.

In 2003, the Allahabad High Court’s Lucknow bench ordered another survey on the disputed site. The survey report, which was submitted in the court, stated that among the structures listed in the report are several brick walls in east-west and north-south orientation, decorated coloured floor, pillar bases and a 1.64-meter-high decorated black stone pillar with figures and inscriptions of holy verses in the Arabic language were found, according to news agency PTI. 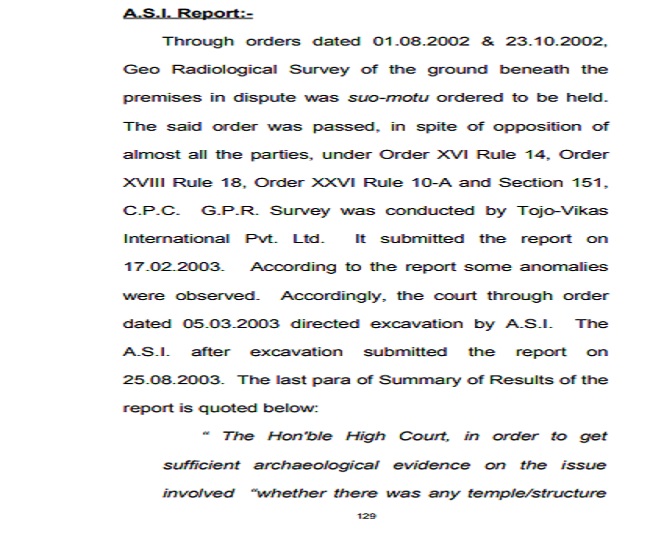 The excavation gave traces of a structure beneath the three-domed Babri Mosque. At least three layers of the floor are visible, the report claimed. These facts prove the enormity of the pre-existing structure, it added.

However, the report also states that the place does not have a colony or Mohalla consisting of small houses, instead it is a place where people gathered in large numbers to offer prayers. The report also shows two graves on the site which was not examined in detail by the ASI, raising questions, as reported in Outlook weekly.

On the other hand, the report also shows two graves on the site which was not examined in detail by the ASI, thereby raising questions on the credibility of the survey, with the Muslim parties alleging that the surveys were done under political influence. 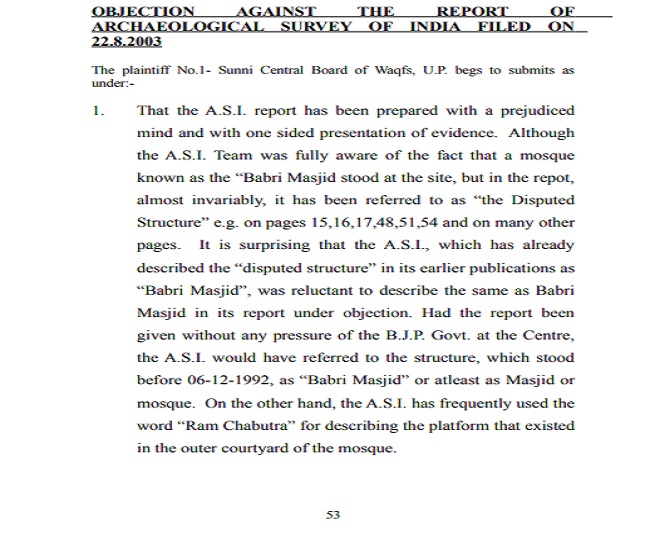 After the Allahabad High Court’s commissioner’s order given to the ASI to excavate the site in 2003 and present a report, the surveyors presented a report which differs from the earlier presented reports and created confusion and did not lead to a conclusion. 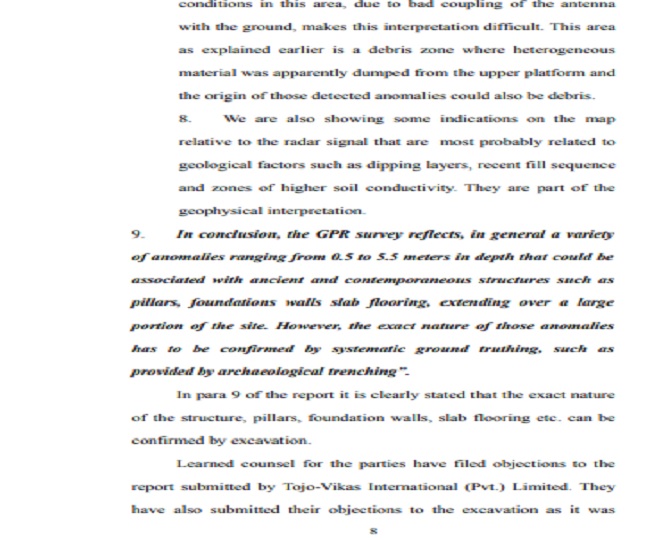 After 15 years of the last ASI report on the disputed land, the Supreme Court, during the day-to-day hearing of the case last month, said that the ASI report is not any other ordinary report and it was prepared by cultivated minds.

“The ASI report of 2003 on the Ram Janmabhoomi-Babri Masjid site was not an "ordinary opinion" as the archaeologists were acting on behalf of the Allahabad High Court to give their views on the excavated materials”, the Supreme Court said.

This statement from the Supreme Court comes after Meenakshi Arora representing the Sunni Wakf Board claimed that the report was just an opinion and not a binding on court as it was only advisory in nature and it should not be a base for the judgment adding that the report was mere imagination and must be supported with a substantial proof that a Ram Temple already existed at the disputed site.

After 70 years of a long battle in different courts, the hearings in the matter got over yesterday (16 October), as indicated by Chief Justice of India Ranjan Gogoi on the 39th day of the hearing. He had earlier set October 17 as the deadline for the conclusion of arguments. Now the nation awaits the judgment in the matter, which will be announced by November 17 this year.