Amit Shah was earlier admitted to AIIMS for post-COVID care and was discharged after two weeks on August 31.

New Delhi | Jagran News Desk: Home Minister Amit Shah was readmitted to Delhi's AIIMS on Saturday evening for a complete medical checkup before the beginning of the Parliament Monsoon Session. He is reported to be in stable condition as of now. The 55-year-old Home Minister was admitted in the cardio Neuro department of the hospital at around 11 pm on Saturday.

"Union Home Minister Amit Shah was discharged from AIIMS after post-COVID care on August 30. As per advice given at discharge, he has now been admitted for a complete medical checkup before the parliament session for 1-2 days," said the AIIMS in a statement. 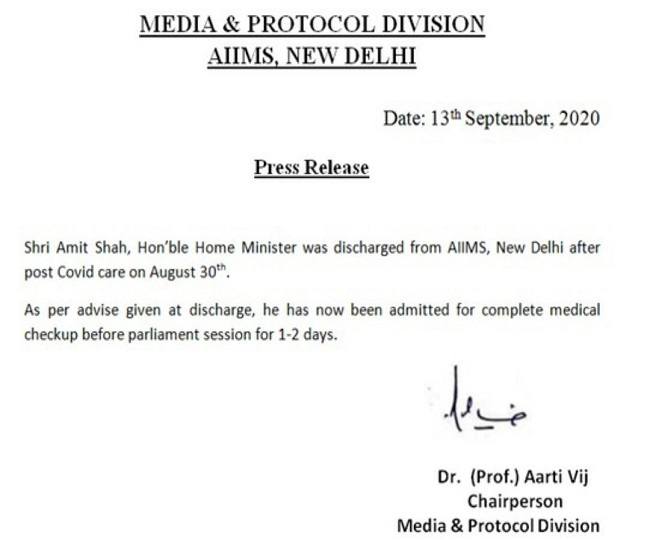 Shah was earlier admitted to the premier health institute for post-COVID care on August 18 after he suffered post-COVID ailments. He, however, was discharged from the hospital after two weeks on August 31.

"Amit Shah, Union Home Minister, is admitted at AIIMS, New Delhi for post-COVID care. He has recovered and is likely to be discharged in a short time," the AIIMS had said in a statement on August 30.

On August 2, Shah had said on Twitter that he had tested positive for COVID-19. He had undergone treatment at Medanta Hospital in Gurugram and was discharged on August 14  after he tested negative for the highly contagious COVID-19 infection. Later, the union home minister was admitted to the AIIMS following complaints of fatigue and body ache.

"Today my coronavirus test report has come negative. I thank God and at the moment I express my heartfelt gratitude to all those who have blessed me and my family by wishing me well. Will stay in home isolation for a few more days on the advice of doctors," Shah had said after getting discharged from the hospital.

Meanwhile, the novel coronavirus has been surging at an alarming rate in India. So far, the deadly infection has affected over 46 lakh and claimed more than 77,000 lives in India. According to the Union Health Ministry, more than 36 lakh people have recovered from the virus, taking India's recovery rate to 77.77 per cent.

"India's COVID-19 recoveries have witnessed a steep exponential rise - from 50,000 in May to over 36 lakhs in September. A high level of more than 70,000 recoveries reported every day. Recoveries are nearly 3.8 times the Active Cases (under 1/4 total cases)," it said in a statement.