Agnipath Protest | No Rollback Of New Scheme, Says Def Ministry; First Batch Of Agniveers To Be Enrolled By Dec

Agnipath Scheme Protests LIVE: The agitation also spread to the southern states of Tamil Nadu, Karnataka and Kerala, with aspirants doing push-ups on roads at some places to register their protest.

New Delhi | Jagran News Desk: As protests against the Centre's Agnipath scheme continue in several parts of the country, Defence Minister Rajnath Singh on Sunday held another meeting with the three Service Chiefs of the Indian Army, Indian Air Force and the Indian Navy and discussed the rollout of the scheme and ways to pacify the agitators, protesting against the new recruitment model for the past four days. This is the second such meeting called by Rajnath Singh in two days. Singh on Saturday had said that the Agnipath scheme was brought after wide-ranging consultations and suggested a "misunderstanding" was being spread for political reasons

Mobs set ablaze Taregana railway station in Bihar during a bandh on Saturday and vandalised Ludhiana railway station in Punjab, as protesters continued to target railway properties on the fourth day of the stir and blocked roads and rail tracks in several states including West Bengal, Haryana, Rajasthan, Odisha and Uttar Pradesh. Railways cancelled 369 trains on Saturday and passengers faced a harrowing time.

Here are the Latest Updates from the Agnipath Scheme Protests:

- And if any FIR lodged against them, they can't join...They (aspirants) will be asked to write as part of the enrollment form that they were not part of the arson, their police verification will be done:Lt General Anil Puri, Addit'l Secy, Dept of Military Affairs

- Indian Army's foundation in the discipline. No space for arson, or vandalism. Every individual will give a certificate that they were not part of a protest or vandalism. Police verification is 100%, no one can join without that: Lt General Anil Puri, Addit'l Secy, Dept of Military Affairs

- Indian Navy has 30 women officers at present sailing on different Indian Navy ships. We have decided that under Agnipath scheme, we will recruit women also. They will be deployed on warships also: Vice Admiral Dinesh Tripathi

- By December first week, we will get the first batch of 25,000 'Agniveers' and the second batch would be inducted around February 2023 making it 40,000: Lt Gen Bansi Ponappa

- From November 21 this year, the first naval 'Agniveers' will start reaching the training establishment INS Chilka, Odisha. Both female and male Agniveers are allowed for this: Vice Admiral Dinesh Tripathi on Agnipath scheme

- Agniveer batch number 1 registration process to start from June 24 and from July 24, phase 1 online examination process would start. The first batch would be enrolled by December and training would commence by December 30: Air Marshal SK Jha

- The 'Agniveers' would get the same allowance in areas like Siachen and other areas which are applicable to the regular soldiers serving at present. No discrimination against them in service conditions: Lt Gen Anil Puri on Agnipath scheme

- 'Agniveers' will get a compensation of Rs 1 crore if he sacrifices his life in service of the nation: Lt Gen Anil Puri

- This reform was long pending. We want to bring youthfulness and experience with this reform. Today, a large number of jawan are in their 30s and officers are getting command much later than in the past. Around 17,600 people are taking premature retirement from the three Services every year. No one ever tried to ask them what they will do after retirement: Lt General Arun Puri,  Additional Secy, Dept of Military Affairs

- This scheme will kill the youth of the country, will finish Army... Please see the intent of this govt and topple it. Bring a govt that is true to the nation, and protects the country's assets. I urge you to do peaceful protest but don't stop: Congress's Priyanka GV on Agnipath scheme

This scheme will kill the youth of the country, will finish Army... Please see the intent of this govt and topple it. Bring a govt that is true to the nation, protects country's assets. I urge you to do peaceful protest but don't stop: Congress's Priyanka GV on Agnipath scheme pic.twitter.com/rNoYtlqLgK

- We request them (youth) to understand the (Agnipath) scheme & then take a decision. Convey if any errors. But is this the way that you're burning buses, and trains, causing harm to the national property? The opposition should make responsible remarks & not provoke: MoS Defence Ajay Bhatt

- Congress leaders including Sachin Pilot and Priyanka Gandhi Vadra among others protest against the Agnipath scheme at Delhi's Jantar Mantar. 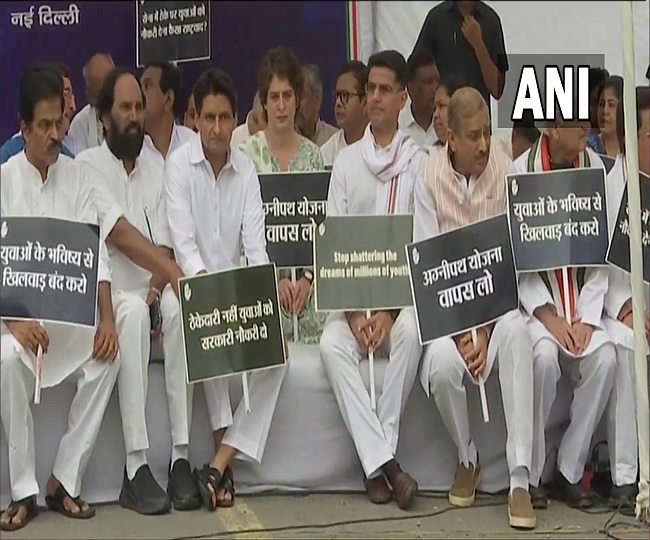 - Congress will today stage a protest at Jantar Mantar against the Agnipath scheme. The Delhi Police has deployed additional forces at Jantar Mantar ahead of the Congress' Satyagrah protest against Agnipath. Rahul Gandhi had on Saturday asked the party workers not to celebrate his birthday in wake of the ongoing protests across the country. 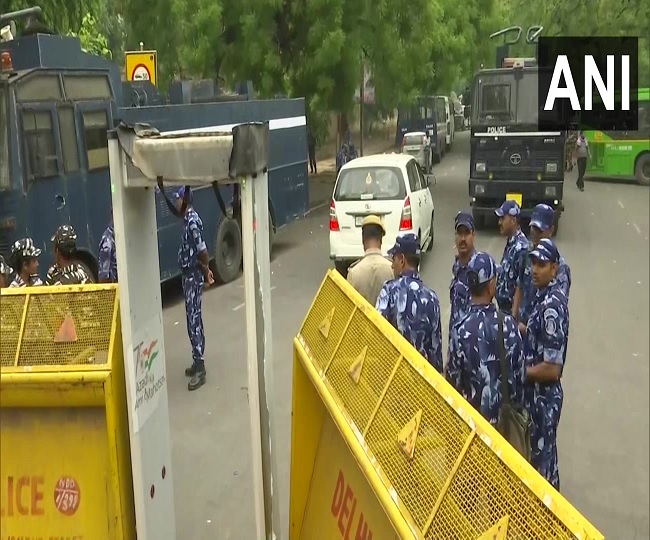 - Defence Minister Rajnath Singh today held another meeting with the three service chiefs and discussed the quick roll-out of the scheme. The defence minister also discussed ways to pacify the agitators, protesting against the new recruitment scheme.

- The Indian Air Force on Sunday released the details of the Agnipath recruitment scheme amid the ongoing agitation and widespread protests against the scheme across several states. The process for recruitment will begin on June 24. The IAF document lists the eligibility, educational qualification, medical standards, assessment, leave, remuneration, and life insurance cover among many other factors.

- Amid the massive protest, the Centre also announced several supporting measures to pacify the agitators. The Defence Ministry approved a proposal to reserve 10 per cent of the job vacancies or Agniveers meeting requisite eligibility criteria. A similar decision was announced by the Home Ministry also. Several state governments have also announced that Agniveers, after serving the armed forces for 4 years, will be given preference in filling vacancies in state police forces.

- The vandalism incidents during the protests have led to the destruction of property worth Rs 200 crore, damage to around 50 train coaches and five engines that were completely burnt and are out of service, a railway official said. He further informed that Platforms, computers and various technical parts were damaged while some trains were also cancelled.

- Violence and arson marked the fourth consecutive day of protests against Agnipath on Saturday when a state-wide bandh was also called by Army aspirants to press the demand for the rollback of the new system of recruitment in the armed forces. Police acted tough, arresting altogether 250 people across the state during the day and lodging 25 FIRs.