'Aarogya Setu not mandatory for children below 14 years': AAI issues SOP for recommencement of domestic flights

However, people above 14 will have to be registered with the Aarogya Setu app on their phones, the AAI said.

In a another statement, the AAI said that passengers must compulsorily walk through thermal screening zone on city side before entering airport terminal building.

"Airport operators must make appropriate arrangement for sanitisation of passengers' baggage before entry into terminal building," the AAI said in a statement, as reported by news agency PTI. 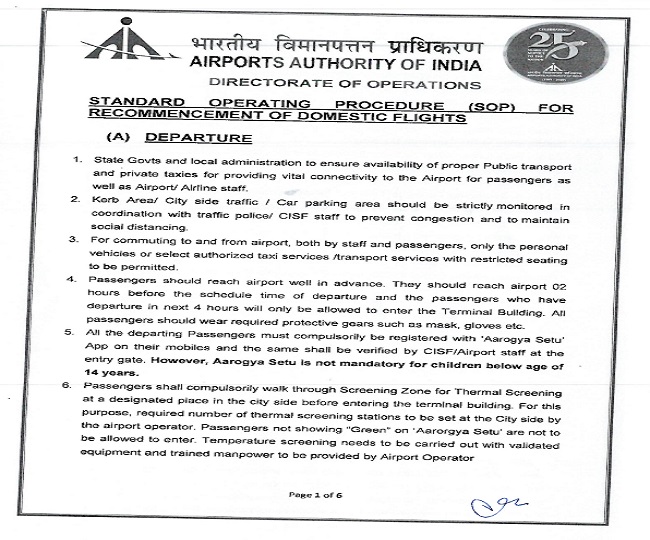 Civil Aviation Minister Hardeep Singh Puri on Wednesday announced that domestic passenger flight services will resume from May 25 in a "calibrated manner". He, however, did not say as to when international passenger flights would resume.

"Domestic civil aviation operations will recommence in a calibrated manner from Monday, May 25, 2020. All airports and air carriers are being informed to be ready for operations from 25th May. SOPs (Standard Operating Procedures) for passenger movement are also being separately issued by the Ministry of Civil Aviation," Puri had tweeted.

According to a news agency PTI report, the only 30 per cent of domestic flights will be allowed initially. The report further said that the Centre put a cap, as well as a floor, on all air fares so as to discourage predatory pricing by airlines.

"The discussions regarding the floor price and cap price on air fares are currently going on. A decision would be taken soon," PTI quoted an official as saying.

All scheduled commercial passenger flights have been suspended in India since March 25 after the government imposed a lockdown across the country to control the spread of the novel coronavirus. The aviation sector has been hit hard by the pandemic as various countries, including India, decided to suspend commercial flights completely to curb the spread of the virus.

Since March 25, Indian airlines have taken steps like firing expat pilots, announcing pay cuts and leave without pay for employees to conserve cash.