Weather Updates: The IMD has already issued a yellow alert for Delhi-NCR to caution people about a heatwave on Sunday. However, the IMD said that some relief from scorching heat may be witnessed in the coming week.

New Delhi | Jagran News Desk: The India Meteorological Department (IMD) on Saturday issued an orange alert for Delhi saying that the heatwave spell scorching the national capital for the last two days will further worsen in the coming days. The IMD predicted that the temperature in Delhi may soar to 46-47 degrees Celsius today and is likely to remain so on Sunday.

The IMD has already issued a yellow alert for Delhi-NCR to caution people about a heatwave on Sunday. However, the IMD said that some relief from scorching heat may be witnessed in the coming week. "Cloudy skies and thunder may provide some relief from the intense heat next week", the IMD said.

This is the fifth heatwave -- one in March and three in April -- in the capital this summer season. As per the IMD, the maximum temperature at the Safdarjung Observatory, Delhi's base station, is predicted to settle at 44 degrees Celsius as against 42.5 degrees Celsius on Friday.

Delhi on Friday saw the mercury rise to 46.1 degrees Celsius at Najafgarh. The weather stations at Jafarpur and Mungeshpur had recorded maximum temperatures of 45.6 degrees Celsius and 45.4 degrees Celsius, respectively, six notches above normal for this time of the year.

Mrutyunjay Mohapatra, Director General of Meteorology, IMD, also said that a severe heatwave is prevailing in Punjab, Haryana, Uttar Pradesh, Madhya Pradesh, Rajasthan and Vidarbha with temperatures soaring to 46 degrees Celsius. He said that red and orange alerts have been issued for parts of Rajasthan, Madhya Pradesh and Haryana.

However, Mohapatra said that the heatwave will start to abate from next week with starting of a western disturbance in northwest India on May 15 night. "Rainfall with thunderstorms are expected in Jammu & Kashmir, Himachal Pradesh, Uttarakhand along with adjoining plains of north India. Thereafter, temperatures will decrease and heatwave will abate", he said.

Meanwhile, a weather forecast website Eldorado.com issued a list of the 15 hottest places on Earth today. Out of the total 15 places, 10 are from India while five are from neighbouring Pakistan. The Indian cities included in the list are Ganganagar, Nowgong, Barmer, Pilani, Jhansi, Phalodi, Jaisalmer, Bikaner, Kota Aerodrom and Churu. 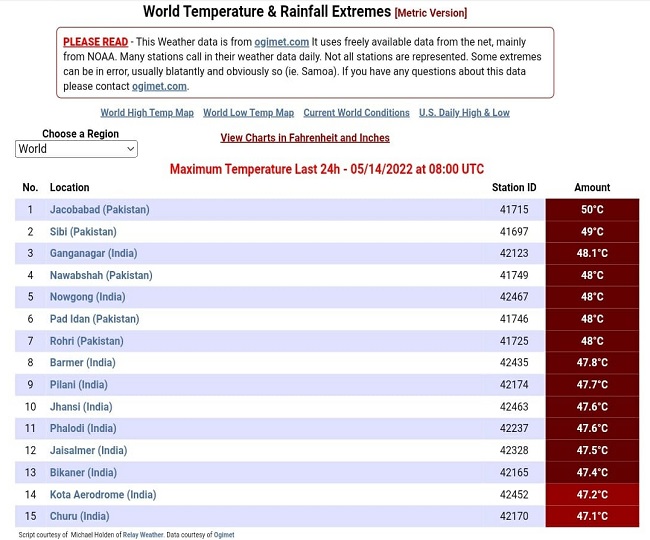 PLT IN SECOND = 0.003133462
Jagran English brings you all the latest and breaking news from India and around the world. Get live English news from India, World, Politics, Entertainment, Lifestyle, Business, Education, Sports, Technology, and much more. Follow english.jagran.com to stay updated with the latest English news.
Copyright © 2022 Jagran Prakashan Limited.