'You're the first she, love you': When Sushant Singh Rajput wrote a motivational message for his sister Shweta Singh Kirti

Shweta had earlier shared the card with the fans too along with the note on Facebook but she later deleted the post. Since she has turned her Instagram private, Shweta’s posts are not accessible to everyone.

New Delhi | Jagran Entertainment Desk: Even almost a month after the untimely demise of Sushant Singh Rajput, fans and several Bollywood stars are sharing heartfelt messages about the actor as they are still in shock. On Sunday, Sushant’s sister Shweta Singh Kirti also shared a post on her Instagram handle remembering her brother. The post features an inspirational handwritten note by Sushant to her loving elder sister Shweta.

The MS Dhoni: The Untold Story actor Sushant, who was looked up by Shweta after her mother’s demise 16 years ago, wrote in the card, “‘She’ who says she can & ‘she’ who says she can’t are both usually right! You are the first ‘she’, love you, Bhai, Sushant”. 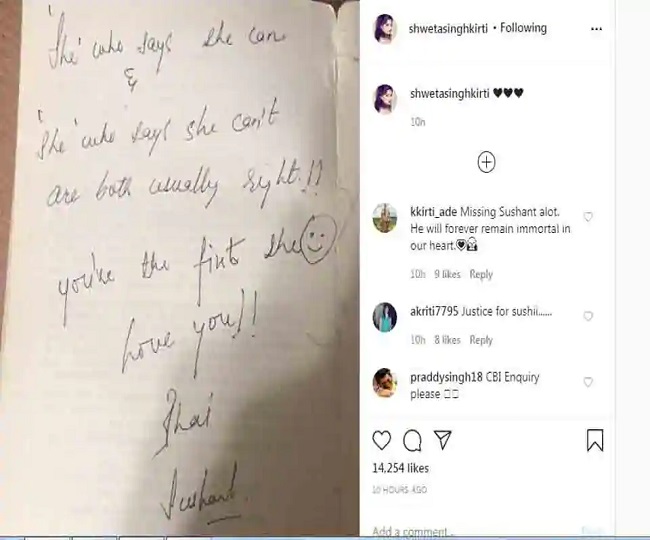 Shweta had earlier shared the card with the fans too along with the note on Facebook but she later deleted the post. Since she has turned her Instagram private, Shweta’s posts are not accessible to everyone.

The whole nation mourned over the sudden demise of Sushant Singh Rajput. However, Sushant’s sister Shweta Singh Kirti, who came to India from the US all the way after receiving the news, since then had been updating the fans and netizens about the details of the final rites of the late actor Sushant Rajput through Facebook.

Rose from a daily soap to a big screen, the death of the actor shook down the whole nation. He was admired by millions with his amazing natural acting skills and some mind-enlightened films like Chhichhore, Sonchiriya, and Kai Po Che. Sushant Singh Rajput’s demise has revealed the dark side of the glimmer of the film industry.

Netizens along with some renowned stars have been calling out the star kids, Bollywood privileged clubs, and favouritism in the industry.

The actor Sushant Singh Rajput had committed suicide on June 14. He was under depression and had been taking anti-depressant pills from the last six months. Police confirmed that the family was unaware of his situation while adding that they are investigating to check if there was any professional rivalry involved in the case.

Meanwhile, a film based on the outsiders referring to Sushant Singh Rajput’s life will release soon which will be directed by Shamik Maulik and produced by Vijay Shekhar Gupta. The movie titled Suicide or Murder? – A star was lost is in the making.