Sidharth Shukla and Shehnaaz Gill's brother Shehbaz shared a warm and strong bond after he met him inside the Bigg Boss 13's house.

New Delhi | Jagran Entertainment Desk: The whole nation is grieving the sudden demise of actor and Bigg Boss 13 winner Sidharth Shukla. On Friday, the actor was laid to rest by his family and friends at Oshiwara crematorium, and hours after his funeral, Shehnaaz Gill's brother Shehbaz dropped an emotional post calling him 'Sher'.

Taking to Instagram, he shared a picture of a late actor and penned a heartwarming tribute. He wrote, "MERA SHER, YOU ARE ALWAYS WITH US AND YOU WILL BE ALWAYS. WILL TRY TO BECOME LIKE YOU. IT IS A DREAM NOW. AND THIS DREAM WILL COME TRUE SOON. I WILL NOT SAY RIP BECAUSE YOU ARE NOT. LOVE YOU, @realsidharthshukla." (sic)

Shehbaz shared a warm and strong bond with Sidharth after he met him inside the Bigg Boss 13's house, where he had come to support his sister Shehnaaz during the family week. Ever since then, the trio was often seen hanging out together in the city. 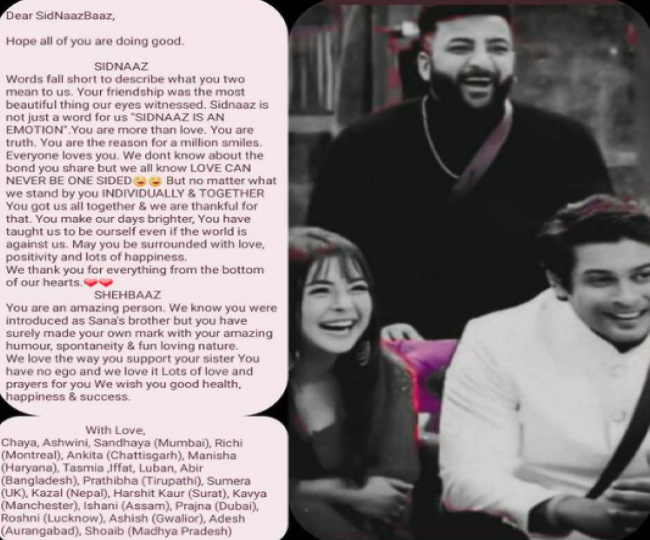 Sidharth's sudden death has come as a huge shock for everyone, including his sister Shehnaaz, who was allegedly dating the late actor. On hearing the news, he immediately rushed to Mumbai to be with his sister during such a challenging time. He accompanied his sister during the last rites of Sidharth and kept consoling her whenever she broke down.

Sidharth and Shehnaaz were fondly known as SidNaaz by their fans, and the latter never shied off expressing her love for Sid. The duo was recently seen on Bigg Boss OTT and Danced Deewane 3.

Sidharth Shukla passed away on September 2, 2021, after suffering a heart attack. He was taken to Cooper Hospital, where he was declared brought dead. His last rites were attended by many TV celebs, including Asim Riaz, Aly Goni, Arjun Bijlani, Abhinav Shukla, Prince Narula, Mahira Sharma, Rashami Desai and Nikki Tamboli.