Vicky Kaushal and Sunny Kaushal penned sweet birthday messages for their dad on his birthday.

Vicky Kaushal and Sunny Kaushal on Thursday penned a sweet message for their dad on the occasion of his birthday.

Taking to his Instagram story, Vicky added a black and white photo of his dad, Sham Kaushal, making the gesture of a hug, and said, "My pillar of strength…Happy Birthday Dad!!!  Khichke jhappi twahnu," with a few hugging face emojis. 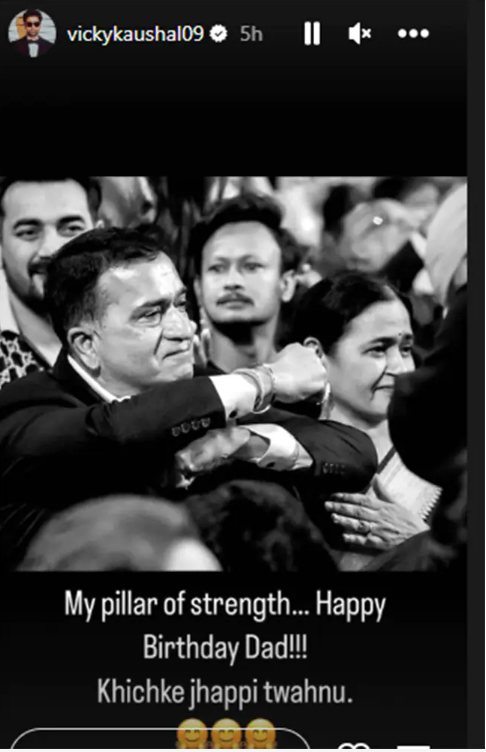 Vicky's brother, Sunny Kaushal, on the other hand, sharing a throwback photo of his father, said, "I guess now I know where I get my style from…Happy birthday to the OG Kaushal."

The Kaushal brothers often keep sharing pictures with their parents on social media. In August, when Vicky won the best actor (critics') award at the 67th Filmfare Awards for his performance in Sardar Udham, he shared an adorable picture with his parents, brother and wife and captioned it as, "My pillars. My strength. My everything… blessed."

In the candid picture, Vicky, Katrina, and Sunny were seen laughing, while Sham and Veena were grinning from ear to ear.

Like his sons, Sham Kaushal too keeps surprising fans with delightful family pictures from time to time.

A few weeks ago, he posted a beautiful snap with Vicky with the caption, "Sun on one side, Son on other side and Sunny Son in the front capturing the moment. All three sources of my energy. Rab Rakha." The picture garnered over 31k likes from fans.

Earlier this year, he had also shared a major throwback picture of Vicky and Sunny from the sets of 2001 film Ashoka, which instantly went viral on social media.

"By God's grace, this photo was taken in 2001 during the shooting of Asoka in Film City. Vishnu Vardhan was the assistant director and Vicky was studying in 8th standard. Nobody ever imagined that one day Vicky will join the film line and in 2022 both of them will be winning Best Director & Best Actor Awards respectively for Shershah and Sardar Udham. Destiny and God's blessings. Rab di meher," the proud father wrote.

On the work front, Vicky will next be seen in Govinda Naam Mera opposite Kiara Advani and Bhumi Pednekar under the Dharma Productions banner. The film is slated to release on Disney+ Hotstar on December 16.

He also has a Laxman Utekar movie, an Anand Tiwari project co-starring Tripti Dimri, and a biopic titled Sam Bahadur, based on the life of the late Field marshal Sam Manekshaw, in his kitty.