Urfi Javed Reveals She Has No Official Surname On Her Passport; Fears Over Being Banned From The UAE

Television actress Urfi Javed is always on the hotline for her unique looks taking the internet by storm every time she posts something. However, this time the Bigg Boss OTT contestant has found herself in trouble once again as Urfi Javed fears being banned from traveling to the UAE after the recent entry rules were changed by the country.

The new travel directive guidelines of the UAE specifically say that travelers must use their primary and secondary names for flying in and out of the UAE. The actress soon reacted to the newly conducted guideline by disclosing that she has no official surname mentioned on her passport, thus she might not be allowed to go to the UAE in the future.

Urfi Javed recently shared a news report sharing the details of the travel directive of the UAE on her Instagram story, where the actress further wrote, "So my official name is only Uorfi, no surname and now I'm f**ked." 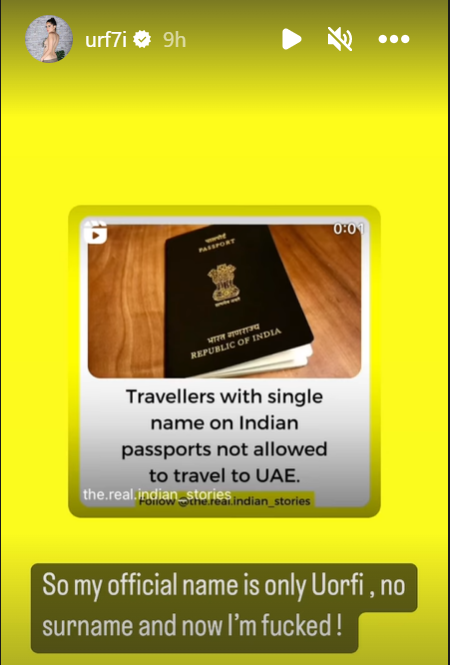 The new circular of the UAE government will come into action from November 21, 2022, when Air India and AI Express were also intimated in a joint circular, notifying the institutes that any passport holder with a single name will not be further accepted by the UAE immigration.

The statement released by the travel directive of the UAE clearly states, "Any passport holder with a single name either in a surname or given name will not be accepted by UAE immigration and the passenger will be considered as INAD."

The actress also changed the spelling of her name from 'Urfi' to 'Uorfi' issuing a statement, "Hi guys, so I've officially changed my name to Uorfi. It'll be pronounced the same as Urfi! Just the spelling. Just want everyone to be mindful while writing my name now so that even I'm mindful. Thank you, love Uorfi."