‘Too too cute’: Riddhima Kapoor’s admiring comment on Alia and Shaheen Bhatt’s picture is winning the internet

Shaheen shared the picture on her Instagram handle and captioned it, “Hi Sweetie”. Alia too replied in the same vein in the comments section

New Delhi | Jagran Entertainment Desk: Shaheen Bhatt on Tuesday shared a picture with sister Alia Bhatt which is winning heart of millions. In the picture, both the sisters are standing on each side of a glass partition with sticking their nose on the glass.

And as we all know the Kapoors are very close to the Bhatts. Ranbir Kapoor’s sister Riddhima Kapoor Sahni is also very close to her brother’s girlfriend Alia. They are often seen commenting on each other’s post.

Shaheen shared the picture on her Instagram handle and captioned it, “Hi Sweetie”. Alia too replied in the same vein in the comments section.

Riddhima not just liked the picture but also commented, “Too too cute @shaheenb @aliaabhatt,” along with several heart emojis. Veteran actress and mother of Alia and Shaheen, Soni Razdan also commented on daughter’s picture with several emoticons. 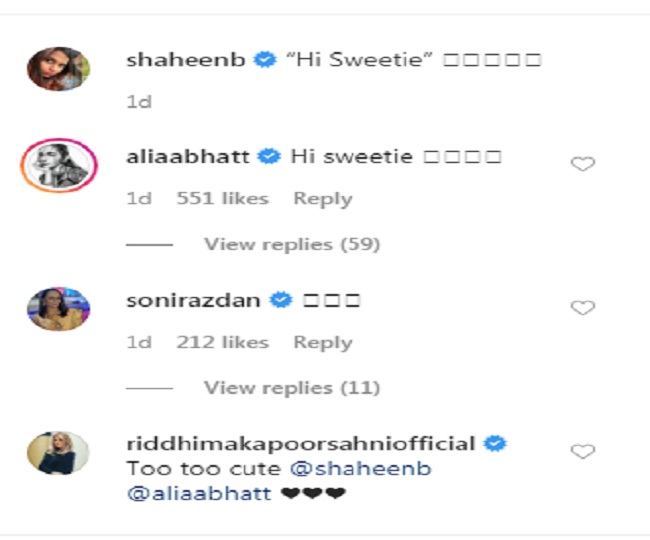 Alia Bhatt and Ranbir Kapoor have been dating for quite some time now. There have been reports that the couple has been quarantining together as well. After the sad demise of Rishi Kapoor, his son Ranbir Kapoor, Neetu Kapoor, Riddhima Kapoor Sahni immersed his ashes in Banganga Tank in Mumbai. Alia Bhatt and filmmaker Ayan Mukherji were also present with the Kapoors during the ritual standing right beside Ranbir Kapoor’s mother Neetu Kapoor. The 67-year-old actor passed away in Mumbai after a two-year-long battle with leukemia.

On the work front, Alia is loaded with Bollywood films. She is currently gearing up for the release of her upcoming film Brahmastra with Ranbir Kapoor. She had been shooting for Sanjay Leela Bhansali’s Gangubai Kathiawadi before the lockdown. She also has her father Mahesh Bhatt’s Sadak 2 alongside Aditya Roy Kapur and Karan Johar's multistarrer Takht in the pipeline.