Anushka Sharma on Thursday shared a glimpse of how her vacation in Paris looks like. The actress shared an Instagram stories showing the balcony of the hotel room.

Bollywood actor Anushka Sharma is currently in Paris having the time of her life with her husband Virat Kohli and daughter Vamika. The actress is an active social media user and often shares her whereabouts. Anushka, who is currently vacationing in Paris shared a glimpse of her view from the balcony of her hotel and also a video of her room.

Taking To Instagram stories, the actress shared a video where she can be seen getting her hair and makeup done in front of a vanity. The hairstylist who is doing Anushka's hair is hairstylist Gregory Kaoua who is also seen in the video.

Later the actress can be seen moving forward in order to give a glimpse of the street as seen through the vintage French windows of the actor’s all-white room. The actress geo-tagged the location as Paris. 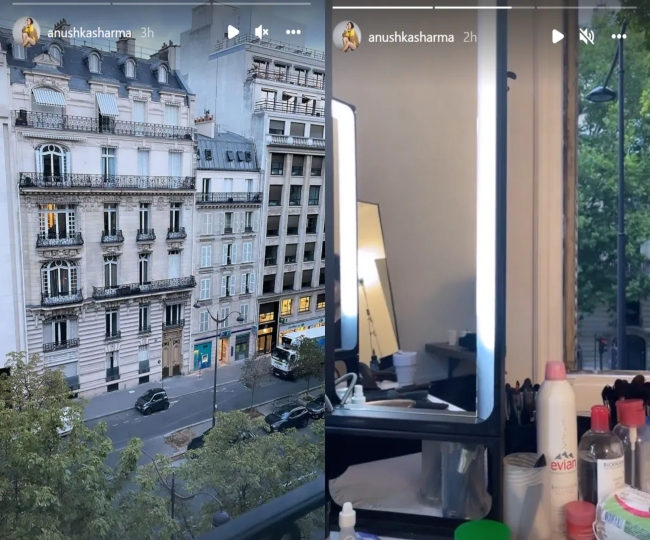 It seems that Anushka is having a quite good time in the city of love Paris. The actress earlier shared a weather update in Paris. Taking To Instagram storied, Anushka click a picture from a different corner of the room and wrote, Hello Paris! 41 Degree Celsius,” with a hot-face emoji.

Earlier Anushka, along with her husband Virat Kohli, was seen in London as the couple attended a music performance by American vocalist Krishna Das in the Britain capital. Several pictures of the couple surfaced online. Virat decided to take a break and spend some quality time with his family. Hence he skipped the Windies tour.

Meanwhile, on Anushka's professional front, the actress is currently preparing for her upcoming release Chakda Xpress. The actress was last seen in Zero. While Chakda Xpress is based on the life events of former Indian cricketer Jhulan Goswami.