A spoof video of Akbar Al Baker's recent interview with Aljazeera is getting viral over social media in which he mocked Indian Guy Vashudev for spreading '#BycottQatarAirways' with the wrong spelling trend on Twitter.

New Delhi | Jagran News Desk: Bollywood actress Kangana Ranaut always make headlines for her controversial statements as her words more often spew venom on almost all things. The National Award-winning actress has once again grabbed the attention of the netizens after she trained her guns at the spoof video of the CEO of Qatar Airways, Akbar al-Baker, over the ongoing controversy in the backdrop of BJP leader Nupur Sharma's derogatory comments on Prophet Mohammad.

In now-deleted posts, Kangana today strongly reacted to the viral parody clip of Qatar Airways CEO Akbar al Baker's interview, where he is seen mocking an Indian guy Vashudev for starting the '#BycottQatarAirways' trend on Twitter after Qatar stood against India for the ongoing Nupur Sharma controversy.

"This idiot of a man has no shame bullying a poor man mocking his insignificance and the place in the world...Vasudev may be poor and insignificant for a rich man like you but he has the right to express his grief, pain and disappointment in whatever context it may be...remember there is a world beyond this world where we all are equal..." Kangana wrote on her Instagram story sharing Akbar al Baker's still from the parody video clip. 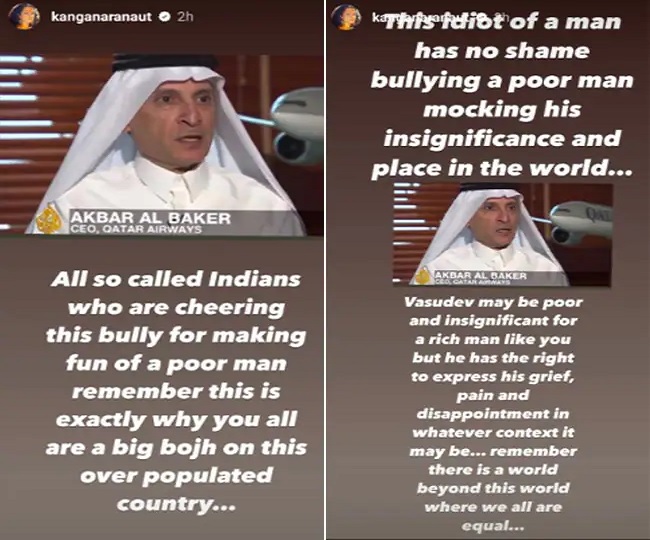 Kangana in another story slammed Al Baker's Indian supporters calling them 'Bojh on this country'. "All so called Indians who are cheering for this bully for making fun of a poor man remember this is exactly why you all are a big bojh on this overpopulated country," she wrote on her Instagram story. However, she deleted both stories within 2 hours.

A spoof video of Akbar Al Baker's recent interview with Aljazeera is getting viral over social media in which he mocked Indian Guy Vashudev for spreading '#BycottQatarAirways' with the wrong spelling trend on Twitter. The dubbed video makes it sound like Akbar Al Baker is personally appealing to Vashudev to call off his boycott.

"Vashudev is our biggest shareholder with a total investment of 634 rupees and 50 paise. And we don't know how to operate anymore and we have grounded all the flights... we are requesting Vashudev to take this call for boycott back," Baker can be heard saying in the parody video.

"This is a special kind of boycott because it is b-y-c-o-t-t. Vashudev Habibi, we are willing to give you one whole plane to make your TikTok videos or maybe we can give you two litres of petrol free," Baker added.

Vashudev, in his video, claimed that Qatar had offered refuge to painter MF Hussain who had painted images of Hindu goddesses. Same Qatar is preaching to us on (former BJP spokesperson) Nupur Sharma's remarks and urged viewers to boycott Qatar and Qatar Airways products.

Reacting to the controversy, the BJP suspended Nupur Sharma and expelled Naveen Jindal, its Delhi Media Head, from the party and issued a statement saying that the BJP is strongly against any ideology which insults or demeans any sect or religion.