Sumona shared an Instagram story and broke the news on social media. She stated that "quarantined at home" after testing positive with Moderate symptoms.

New Delhi | Jagran Entertainment Desk: Actress Sumona Chakravarti, who also features in The Kapil Sharma Show has tested positive for COVID-19 on Tuesday. Sumona shared an Instagram story and broke the news on social media. She stated that "quarantined at home" after testing positive with Moderate symptoms.

Sumona on her social media handle wrote, “I have tested positive for Covid with moderate symptoms. Quarantined at home. Would request anyone who has come in contact with me in the last week to please get yourself tested. Thank You.” 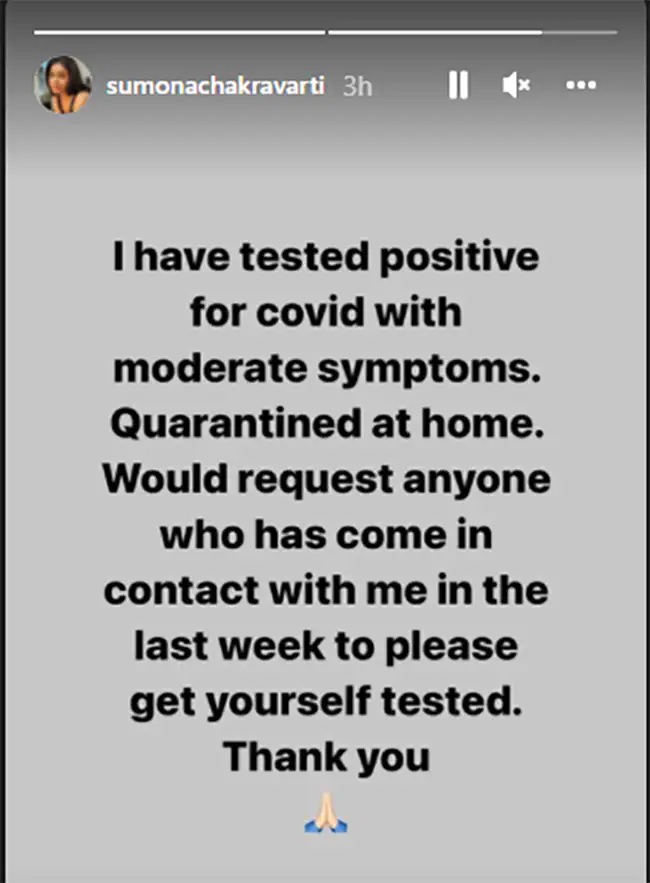 Sumona was recently spotted celebrating New Year. She also posted some photos of her picnic outing and captioned it," Let's begin... 2022."

On the work front, Sumona currently features on The Kapil Sharma Show. Apart from this her stints includes, Comedy Nights With Kapilade Achhe Lagte Hain, Ek Thhi Naayka, Yeh Hai Aashiqui and Neer Bhare Tere Naina Devi. She has also featured in some films such as Mann, Barfi!, Kick and Phir Se and others.

Recently, Arjun Bijlani also tested positive for the virus but later revealed that he is free of viruses. India in the last 24 hrs reported 37,379 new Covid-19 cases, 124 deaths. While, Maharashtra remains top in the list of worst-hit states in the nation.