Taapsee Pannu-starrer Rashmi Rocket to release on THIS date at Zee5; check here

Rashmi Rocket: Taapsee Pannu will be seen essaying the role of Gujarati athlete name Rashmi while Priyankshu will be her husband in the sports drama.

Revealing the premiere date, Taapsee took to her Instagram handle and informed her followers that the film will release in October on the eve of Dussehra at Zee5. Sharing the poster, she wrote, "Get ready to run with Rashmi in this race on and off the track. She will need you in this one 🏃🏾‍♀️🚀 #RashmiRocket ready to take off on 15th October 2021 only on @zee5." 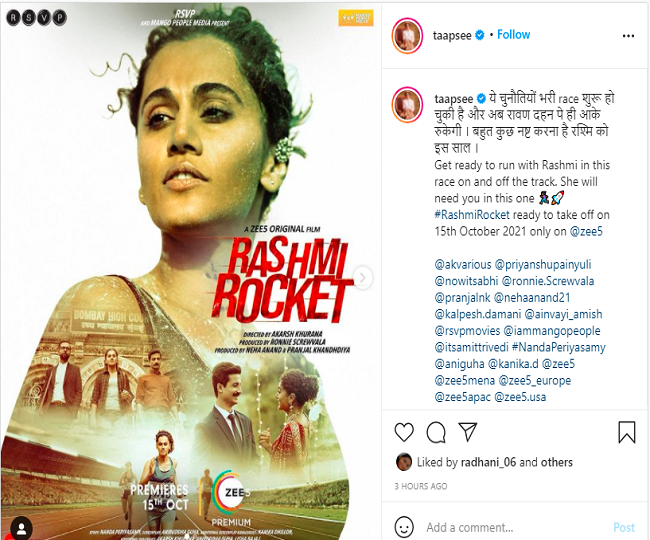 As soon as she shared the poster, her fans flooded her comment section with congratulatory and best wishes messages.

Talking about the film, Taapsee will be seen essaying the role of Gujarati athlete name Rashmi while Priyankshu will be her husband in the sports drama. Supriya Pathak will portray her mother's role in the film. To essay, the role of an athlete, the actress went through rigorous physical training.

After wrapping up the film, Taapsee dropped a post on her Instagram handle and penned an emotional note expressing her feelings. She wrote, "Not sure if I have the time and space to explain how this film actually happened. From the basic storyline I heard in Chennai 3 years back to actually complete its filming against all odds in these challenging times. This was one hell of a driven team effort (sic)!”

The film is written by Kanika Dhillon, Nanda Periyasamy and Aniruddha Guha, and bankrolled by Ronnie Screwvala along with Neha Anand and Pranjal Khandhdiya.

Taapsee's Rashmi Rocket will clash with Vicky Kaushal's Sardar Udham Singh, which is scheduled to release on the same date on Amazon Prime Video.