Sushant Singh Rajput, 34, was found dead at his residence in Mumbai’s Bandra on June 14.

Mumbai | Jagran News Desk: The mystery over the death of Bollywood actor Sushant Singh Rajput seems to continue as the probe is getting murkier with each passing day. With the mystery of Rajput’s death continuing, the Enforcement Directorate (ED) questioned Rhea Chakraborty and her two of her family members on Monday again. This comes a day after the probe agency grilled the actress’ brother Showik for more than 18 in connection with Sushant’s death.

Sushant Singh Rajput, 34, was found dead at his residence in Mumbai’s Bandra on June 14. The actor was reportedly suffering from depression and committed suicide at his residence. Since then, several people, including his family members, fans and some noted Bollywood actors, have alleged foul play in Sushant’s death. The Mumbai Police, however, has denied the reports of foul play in Rajput’s death.

Rhea Chakraborty on Monday approached the Supreme Court with a fresh plea alleging media trial and attempts to pronounce her guilty for the death of Sushant Singh Rajput, reports news agency ANI.

'What's need for FIR in Bihar'

Shiv Sena leader Sanjay Raut on Monday said that there was no need for an FIR to be filed in Bihar in Sushant's death. Urging people to "have some faith" in the Mumbai Police, Raut said that every police "holds a reputation in its state and if someone interfere in that then matter gets worse".

"If CBI registered FIR, then it's their compulsion. It comes under centre and government has its own compulsions. Bihar govt made a recommendation when they've nothing to do with the matter. Mere angne mein tumhara kya kaam hai? Investigation is taking place here," news agency quoted Raut as saying.

Siddharth Pithani, who was the friend and Creative Content Manager of Sushant Singh Rajput, also appeared before the ED on Monday. Pithani was summoned by the probe agency to be present on August 8 but he Pithani did not join the probe then. 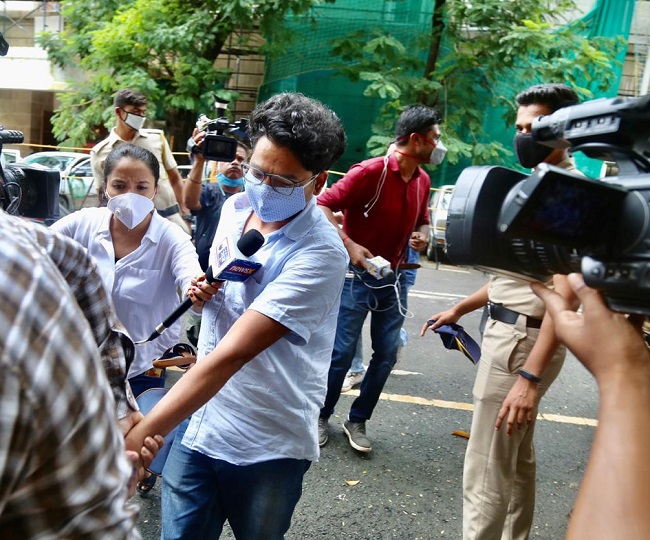 Actress Rhea Chakraborty, her brother Showik Chakraborty and her father have arrived at the office of the Enforcement Directorate (ED) to record their statements.

Rhea Chakraborty, who was in a live-in relationship with Sushant Singh Rajput, will appear before the ED on Monday again. The probe agency had already questioned Rhea once on Saturday, following which she was called back on Monday.