Anushka Sharma slammed the publication and the photographer by reposting a picture of hers and Virat Kohli relaxing in their balcony.

New Delhi| Jagran News Desk: Being a celebrity is not an easy task every day they have to wake up and get ready for a new set of the fight, even the paps leave no room for privacy and keep following them wherever they go. Every now and then celebs hit headlines for getting rude and lashing out at paps for intruding in their personal life. Now the recent celeb to speak on this matter is Anushka Sharma.

Taking to her Instagram handle, Pari actress slammed the publication and the photographer by reposting a picture of hers and Virat Kohli relaxing in their balcony. She lashed out them for invading couple's private moment, despite her request not to do so. On her Insta story she wrote, "Dispute requesting the said photographer and the publication, they still continue to invade our privacy. Guys! Stop this right now!" 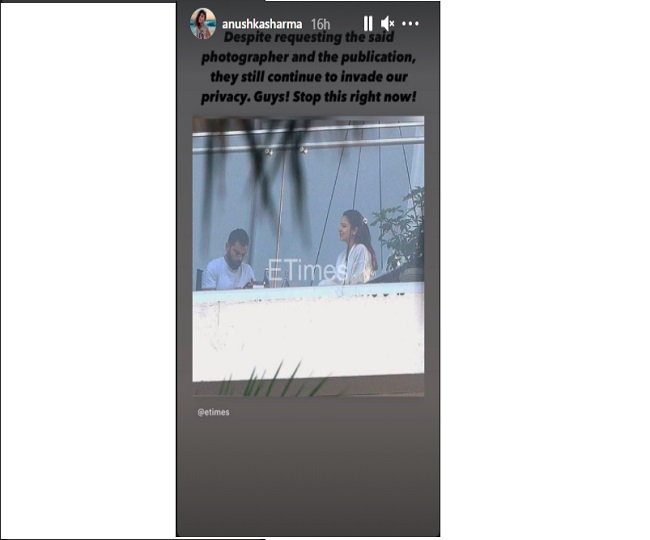 The 32-year-old actress who is expecting her first child with husband Virat Kohli is often spotted by paparazzi at the clinics. Recently, in an interview with Vogue, Anshuka revealed how she and cricketer are planning to raise their child. She said, "The pandemic has been a weird blessing in a way. Virat was around and I could keep it a secret. We only left to go to the doctor’s clinic. No one was on the streets so we couldn’t be spotted."

Anushka and Virat Kohli announced their pregnancy last year in August and are expecting the birth of their child this month.

On the work front, the actress has not taken any projects and is rather focusing on her new role of producer. Last year we saw her producing to amazing web shows namely Paatal Lok and Bulbbul. For this, she received immense applaud from critics and fans and even won Filmfare OTT Award for Best Series for Paatal Lok.