New Delhi | Jagran Entertainment Desk: Shah Rukh Khan and Gauri Khan's youngest son AbRam has turned a year older today. The power couple welcomed the youngest Khan of the family in 2013 via surrogacy. Just like other star kids even he enjoys immense popularity since he was born. The little munchkin is also quite popular on social media and enjoys a great fan following among people, just like his elder siblings Aryan Khan and Suhana Khan.

As AbRam has turned a year older, his elder sister Suhana, who is currently away from the family studying in New York, has dropped a wish for her baby brother. Taking to Instagram handle, the gorgeous daughter of SRK has posted an awedorable throwback video, wherein the siblings can be seen enjoying by the pool. In the video, AbRam gives a peck on Suhana's cheek, making the moment heartwarming. She captioned the post, "Birthday Boy" 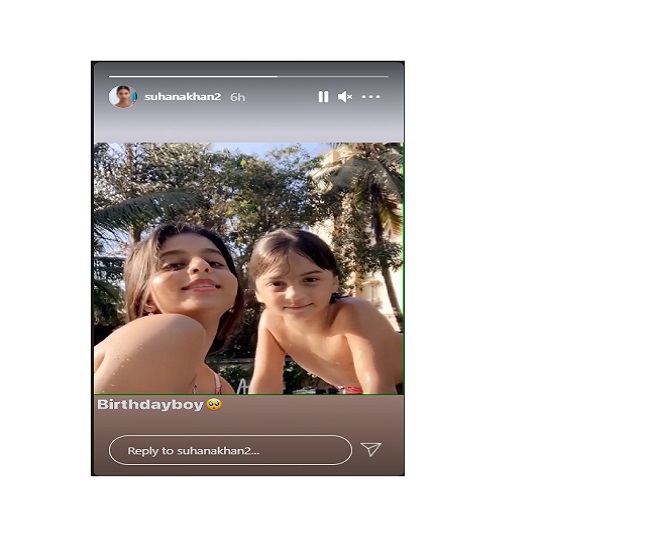 Birthdays are raining in Mannat as recently SRK's little daughter turned 21-year-old on May 22. Suhana Khan celebrated her birthday in the US with her friends wherein she was seen gorgeous donning a black bodycon type dress with her hair open and minimal makeup.

Suhana is quite active on social media and keeps giving her followers a sneak peek into her personal life. Ever since she made her Vogue debut, reports regarding her Bollywood debut is doing rounds. However, the star kid is expected to make her debut on the silver screen only after completeing her studies.

Meanwhile, talking about Shah Rukh Khan, he was last seen in the film Zero alongside Anushka Sharma and Katrina Kaif. This year he is expected to dazzle the silver screen with his short appearance in R Madhavan's Rocketry: The Nambi Effect, Ranbir Kapoor's Brahmastra and Aamir Khan's Laal Singh Chaddha. While his full-fledged film Pathan will release in 2022.