Sonam and Ahuja tied the knot on May 8, 2018, in a traditional Anand Karaj ceremony. She announced her pregnancy a few weeks back and is expecting her first child with her husband, Anand Ahuja this fall.

New Delhi | Jagran Entertainment Desk: The new mommy-to-be in town, Sonam Kapoor is a fashionista and her pregnancy is not getting in the way of her style game. On Monday, actress Sonam Kapoor Ahuja who is expecting her first child with husband Anand Ahuja, took to Instagram to share a mirror selfie with her baby bump. In the selfie, Sonam is looking uber-cool in a black dress and sneakers. The mirror selfie clearly portrayed Sonam's pregnancy glow and her radiating skin.

Sharing a story on Instagram, the 'Neerja' actor flaunted her baby bump, taking a sideways mirror selfie. She wore an all-black, sleeveless maxi dress with matching black and grey Nike sneakers. Sonam let her hair loose, opting for minimalistic jewellery. The actress wore a gold choker, a pair of gold studded earrings, and a golden ring on her forefinger. She was also seen cradling her baby bump with one hand. 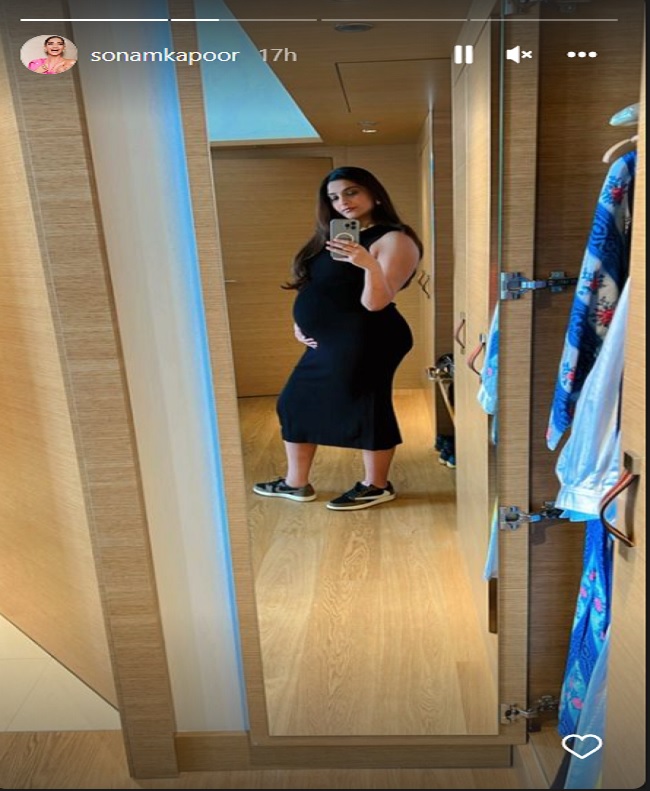 Soon after, she shared the Instagram story, Sonam's husband reposted it on his own Instagram handle, tagging his wife with an emoji.
Earlier, Sonam Kapoor Ahuja had shared a picture of herself and her husband Anand Ahuja on her Instagram handle. In the photo, Sonam Kapoor and Anand are sitting beside each other in what seems a Guru Dwara.

Sharing the pics, Sonam had wished Anand on the occasion of their anniversary. She wrote in the caption, “Happy happy anniversary, Anand Ahuja. I've always been an incurable romantic and believed in all the love stories ever written. You've surpassed all expectations of what I dreamt and wished for. I thank the universe every day that gave me the best man in the world! Love you the most my baby. 6 years down and an eternity to go. #everydayphenomenal."

Sonam and Ahuja tied the knot on May 8, 2018, in a traditional Anand Karaj ceremony. She announced her pregnancy a few weeks back and is expecting her first child with her husband, Anand Ahuja this fall.

Meanwhile, on the work front, the actress has a crime thriller, titled 'Blind' in her kitty. Last the actress was seen in films like The Zoya Factor, Veere Di Wedding and Neerja.