Sidharth Shukla's family thanked his fans and well-wishers for showering their love throughout Sidharth's journey. However, requested them to let his family grieve in peace.

New Delhi | Jagran Entertainment Desk: Sidharth Shukla sent his near and dear ones in utter shock with his sudden death after suffering a cardiac arrest. Now, four days after his demise, the late actor's family has released a statement requesting everyone to respect their privacy. They further thanked the Mumbai Police for acting as a shield at the crematorium.

They also thanked his fans and well-wishers for showering their love throughout Sidharth's journey. However, requested them to let his family grieve in peace. The statement read, "Heartfelt gratitude to everyone who has been a part of Sidharth's journey and showered him with unconditional love. It definitely doesn't end here as he now resides in our hearts forever! Sidharth valued his privacy, hence we request you to allow our family the privacy to grieve. A special Thank You to the Mumbai Police force for their sensitivity and compassion. They have been like a shield, protecting us and standing by us every minute of the day! Please keep him in your thoughts and prayers. Om Shanti - The Shukla Family." 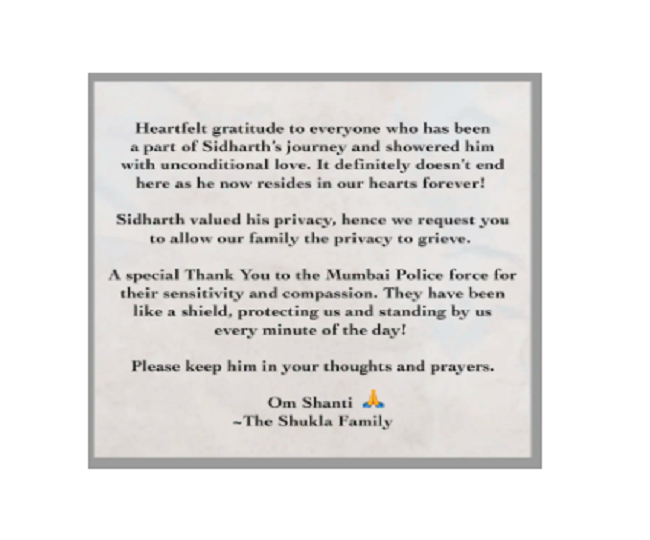 The actor, who passed away at the age of 40, is survived by his mother, Rita Shukla and two sisters Neetu and Preeti. The family has organised a virtual prayer meet in honour of Sidharth. The family has also invited his ardent fans to join the special meditation and prayer meeting via a Zoom link. The prayer meeting will be held at 5 pm today, September 6. (Click here for further details)

On the professional front, Sidharth has been part of several TV serials, including Babul Ka Aangann Chootey Na, Love U Zindagi and Dil Se Dil Tak. However, she shot to fame with Colors longest-running show Balika Vadhu, and since then, there was no looking back for the actor. In 2019, the actor participated in one of the biggest reality shows, Bigg Boss 13 and emerged as its winner.