Fans are curious to know whether the duo is dating or not. However, there is no confirmation from both the actors.

New Delhi | Jagran Entertainment Desk: Bollywood actor Siddharth Malhotra and Kiara Advani’s rumored relationship is creating a buzz since a long time now. Fans are curious to know whether the duo is dating or not. However, there is no confirmation from both the actors.

Baar baar dekho actor Siddharth Malhotra on Tuesday asked the fans for a quick AMA (Ask me anything) session. Fans out of curiosity asked the actor “one word for Kiara Advani” regarding the rumor. But Sid’s reply left the fans more baffled. He replied “Shershaah”. 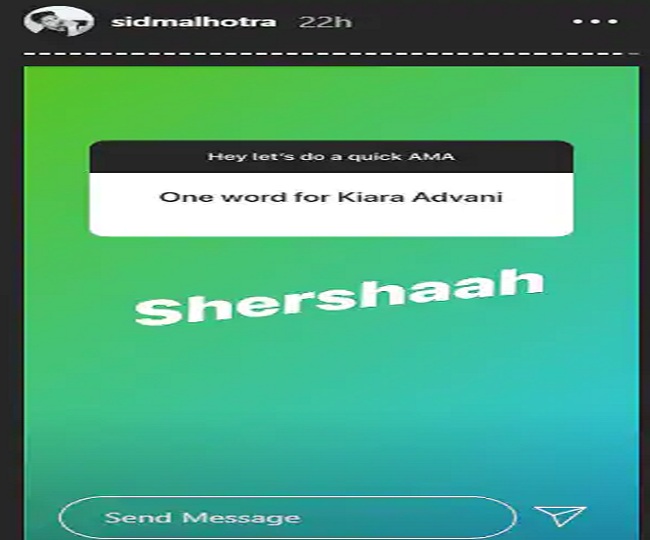 The film stars Sidharth Malhotra in a double role, as Batra and his identical twin brother Vishal, while Kiara Advani plays the female lead. The official announcement for film was made in May 2019; principal photography commenced in the same month and wrapped up in January 2020.

First look posters of the film were unveiled on 16 January 2020 with release date confirmed to be 3 July 2020. However, because of the Covid-19 pandemic the film’s release may get postpone and there has been no announcement about a digital release or change in the film's schedule so far.

A while back, when Kiara had gone on an African Safari, rumour had it that Sidharth Malhotra also was with her. Since then, the rumour mill has been churning about these two Shershaah co-stars.

Post this, the Shershaah actor told Kiara, “Yes, all ears. I am listening.” Seeing the cute banter between the two stars, fans couldn’t stop gushing over the two. He added, "Thank you for this lovely chat." In response, Kiara, who started blushing, said: "Thanks Sidharth Malhotra, I hope you've been watching this entire chat."

On the work front, Kiara has some very interesting projects in her kitty which includes, ‘Bhool Bhulaiyaa 2’ where she will be seen sharing screen space for the first time with Kartik Aaryan and Tabu. Where as, Siddharth Malhotra will be seen in a lead role in "Shershaah" with Kiara Advani.