Siddhant Chaturvedi has shared a behind the scene picture from the set of Kho Gaye Hum Kahan. The movie also stars Ananya Panday and Adarsh Gourav.

New Delhi | Jagran Entertainment Desk: There has been a lot of curiosity regarding the film Kho Gaye Hum Kahan ever since its announcement. The teaser and poster of the film were announced last year and the topic of the film has made the audience interested in the film. The star cast and the makers of Kho Gaye Hum Kahan often share the behind the scenes videos and pictures on social media. Now, Siddhant Chaturvedi, who will star in the film, has shared a picture along with the director on social media.

Siddhant posted the picture on his Instagram story. In the picture, we can see Siddhant, Ananya Panday and Adarsh Gourav together along with the director Arjun Varain Singh. 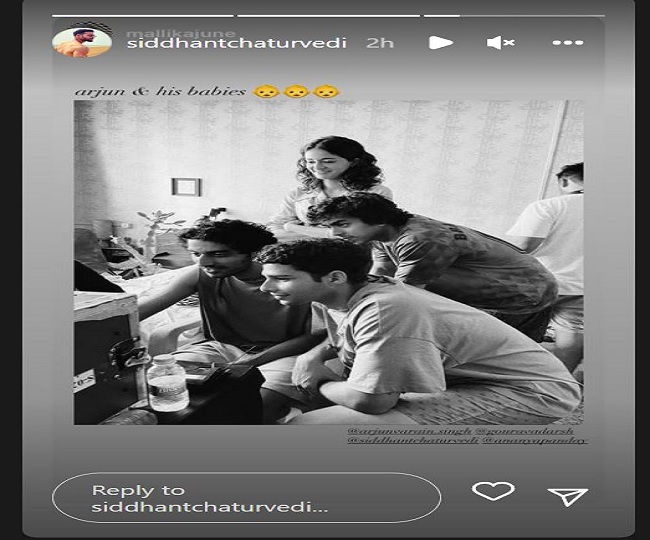 The teaser of Kho Gaye Hum Kahan was shared in September 2021. Sharing the teaser, Siddhant wrote, "When you have to disconnect to connect.. #KhoGayeHumKahan".

Adarsh Gourav also shared a picture with his co-stars and wrote, "A pillow of winds #khogayehumkahan".

Siddhant Chaturvedi was last seen in Gehraiyaan, along with Deepika Padukine and Ananya Panday. This is the second time that Siddhant will work with Ananya as they were seen together in Gehraiyaan. He was also seen in Bunty Aur Babli 2, along with Rani Mukherjee and Saif Ali Khan. He will star in Phone Bhooth, alongside Katrina Kaif and Ishaan Khatter. Meanwhile, Adarsh was last seen in the critically acclaimed film The White Tiger and the web series Hostel Daze. Ananya Panday will soon star in Liger, along with Vijay Deverakonda.