Shilpa is an active social media user and keeps on sharing motivational posts. Recently, the actress took to her Instagram and shared a picture from a book that included a quote by Christiaan Barnard, "Suffering isn't ennobling, recovery is."

New Delhi | Jagran Entertainment Desk: Bollywood actress Shilpa Shetty reunited with husband and businessman Raj Kundra after he spent two months in jail. For obvious reasons, this time period was extremely difficult for the actress as she often shared encouraging posts over her social media handles. However, after Raj Kundra’s bail last week, Shilpa has breathed a sigh of relief.

Recently, Shilpa took to her Instagram and shared a picture from a book that included a quote by Christiaan Barnard, "Suffering isn't ennobling, recovery is." Her post further reads, “We’ve all heard that suffering makes us stronger that we learn from our difficulties. This may be true, but not in the simple way we might think. Difficult times don’t make us better; working through difficult times does".

"Suffering can force us to draw on strengths we never knew we had. Discovering these hidden strengths can then help us cope should difficult times come again. I hate bad times as much as anyone does, but I know I’m strong enough to get through them and recover from them,” she added. The actress also added a wonder woman sticker with the post. 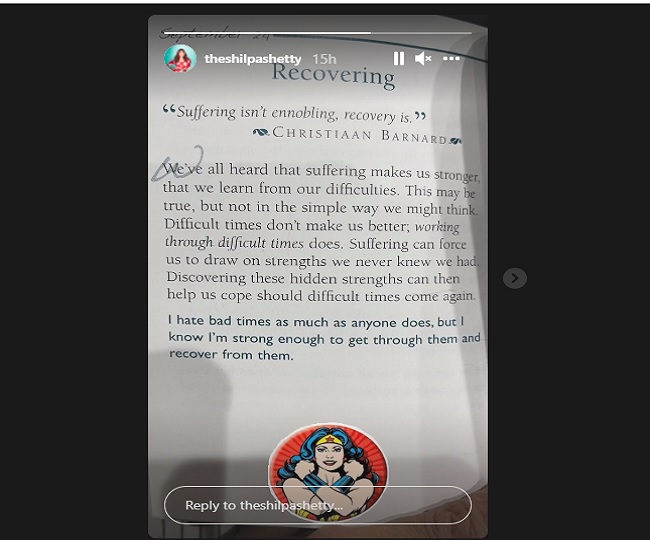 The day when businessman Raj Kundra was granted bail, wife Shilpa Shetty shared a motivational post on her Instagram which said, “moments that push you to the ground" and standing back up with “renewed determination and motivation". Apart from that, the actress recently visited Mata Vaishno Devi Shrine in Jammu and Kashmir's Katra to seek the blessings of the Lord.

This post from Shilpa came after her husband Raj was granted bail on Monday by a Mumbai Court in the p****graphy case on a surety of Rs 50,000. The court has also granted bail to Raj's associate Ryan Thorpe.

The Property Cell of Mumbai Crime Branch had submitted a 1500-page supplementary charge sheet before Esplanade Court in connection with the p****graphy case against Raj. Raj was arrested by police on July 19 along with 11 other people on charges related to the alleged creation of p****graphic films.

Meanwhile, on the work front, after taking a brief hiatus following her husband's arrest, Shilpa is once again busy judging the dance reality show 'Super Dancer 4', alongside Geeta Kapur and Anurag Basu. On the film front, she was recently seen in Priyadarshan's 'Hungama 2