Shark Tank India Season 2 is slowly taking up its pace, where the entrepreneurial show has stood over to be one of the most popular reality shows. Gaining immense fame, the sharks AKA judges on the show have their separate fan base taking over the social media platforms.

Recently, industrialist Harsh Goenka took a jibe at the judges of the show sharing a chart on Twitter showing the loss faced by the judges on the show in their business. Now, responding to it, shark Anupam Mittal has given his epic response with respect and dignity.

I enjoy #SharkTankIndia as a program and I think it is a great platform for our budding entrepreneurs.
1
But whenever I think of sharks, I think of the movie ‘Jaws’ and bleeding 🩸! pic.twitter.com/LAmGxQOiU8

Anupam Mittal stated, "I know you meant it in jest so with all due respect sir, I think you reacted to what appears to be superficial, biased, and incomplete data."

He further continued, "Happy to learn from stalwarts, but just to clarify, like you, the sharks don't bleed red, we bleed blue and that's why we do what we do (hug emoji)." Earlier, Harsh wrote along with sharing the chart, "I enjoy Shark Tank India as a program and I think it is a great platform for our budding entrepreneurs. But whenever I think of sharks, I think of the movie Jaws and bleeding!" 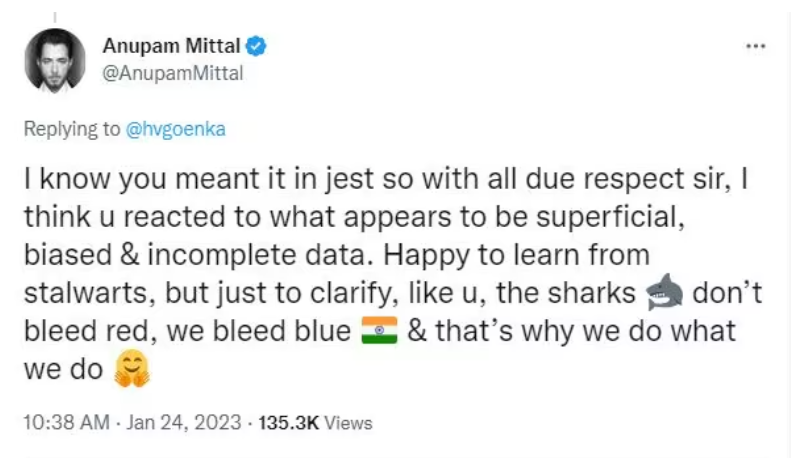 Reacting to the Twitter post, one social media user wrote, "Anupam the only way you could have responded is with data and substance. Not just rhetoric or words. Doesn't make sense in whatever you have mentioned here." To which, Harsh Goenka soon replied, "You are right."

Last week, Indian author Ankit Uttam wrote on Linkedln, In about the downfall of the show, where he shared the details of the companies run by the judges on the show are legit facing losses, whereas they are bagging up deals putting other smaller entrepreneurs also at future risks.

The post read, "Shark Tank India has never worked for me as a show from its first season, unlike its US counterpart. In the US version of the show, every judge is running businesses that turn a profit instead of riding on VC money or drowning in huge losses."

Looking at the profits of each judge from season 1, all have broken down their earnings for the last two years. Hosted by comedian Rahul Dua, the current panel consists of Anupam Mittal, Aman Gupta, Peeyush Bansal, Amit Jain, Vineeta Singh, and Namita Thapar.

Shark Tank India 2 airs on Sony Television and also streams on the SonyLIV app at 10:00 PM from Monday to Friday.