Shah Rukh Khan's Covid news came just after he released the trailer of his next 'Jawan' with director Atlee. Scroll to know more

In a tweet, West Bengal CM wrote, "Just came to know that our Brand Ambassador Shah Rukh Khan has been detected covid positive. Pray for the fastest recovery for the superstar. Get well Shahrukh! Spring Back asap." 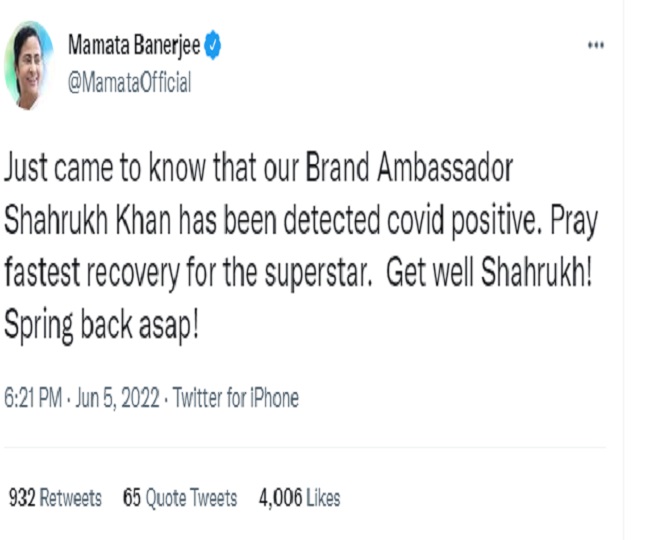 A few days ago, SRK attended Karan Johar's 50th Birthday Bash. As per several media reports it is also being reported that Katrina Kaif has also tested positive for covid-19 however there is no confirmation on the same. As per News18, the actress tested covid positive a few days ago and has completed her quarantine period.

Also, Maharashtra is witnessing a surge in Covid cases. Seeing the situation, BMC has asked the city to stay on alert. The body has also instructed the film studios located in the posh K-West ward of the city not to arrange any kind of gatherings where a lot of people are involved.

SRK's Covid news came just after he released the trailer of his next 'Jawan' with director Atlee. Speaking about the film, Shah Rukh said in a statement, “Jawan is a universal story that goes beyond languages, geographies and is for all to enjoy. Credit goes to Atlee for creating this unique film, which has also been a fantastic experience for me as I love action films! The teaser is the just tip of the iceberg and gives a glimpse into what’s to come."

On SRK's work front, he has three films on his platter - 'Pathan', 'Dunki' and 'Jawan', a highly-anticipated film with Atlee. Taking a pan-India route, 'Jawan' will release in five languages - Hindi, Tamil, Telugu, Malayalam and Kannada on June 2, 2023.