Sara Ali Khan Reunites With Her 'Vishu Babu' aka Dhanush, Congratulates Him On 'The Gray Man'

Sara Ali Khan and Dhanush reunite at the party of the Russo Brothers. The duo starred together in 'Atrangi Re'.

Dhanush has been hitting headlines these days due to his Hollywood debut in 'The Gray Man'. The movie's directors Joe and Anthony Russo were recently in India to promote the film as well. Moreover, the Russo Brothers also attended the party with Dhanush and the party was a star-studded affair. At the party, Dhanush reunited with his Atrangi Re co-star Sara Ali Khan and the duo also shared a picture on social media.

First, Sara shared a picture with Dhanush on her Instagram story and congratulated him on his movie. She wrote, "Congratulation on The Gray Man!! Loved you in it as usual Dhanush. Had a blast catching up with my Vishu Baba and thoroughly missed Aanand L Rai. 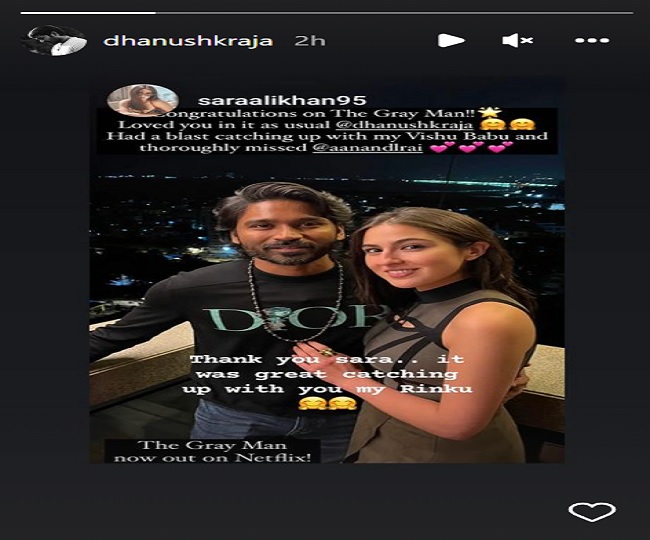 Later, Dhanush reposted the picture and wrote, "Thank you, Sara. It was great catching up with you my Rinku."

Apart from Dhanush and Sara, the movie also starred Akshay Kumar. The movie generally received positive reviews and the star cast was praised for their performances. Moreover, the album of Atrangi Re was a hit as well. The movie is currently streaming on Disney+Hotstar. Atrangi Re revolves around Rinku, who is in love with Sajjad. However, her family does not approve of her relationship and gets her forcefully married to Vishu, who later falls in love with her.

Netflix recently organised the premiere of The Gray Man in Mumbai. It was a star studded affair and was attended by many Bollywood celebs.